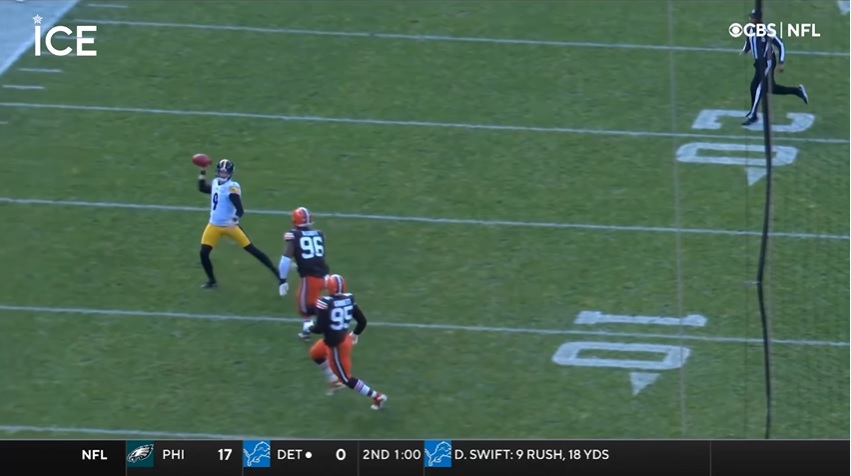 It’s the two-minute warning before halftime.

The Pittsburgh Steelers are, to the surprise of many, tied at three with their AFC North rival, Cleveland Browns.

The thoughts of going into halftime with a lead while getting the ball on the opening kickoff of the second half were on top of every Steelers fan’s mind. And the first play after the two-minute warning, it almost became reality.

Matt Canada and the Steelers’ offense dial up a “snag” concept out of trips bunch and it works to perfection.

However, quarterback, Ben Roethlisberger’s eyes start on the backside of the play. While his eyes are occupied with the covered receivers to the left, the front side defensive backs have blown their coverage. Both defenders go towards the flat route with the #3 receiver, leaving Diontae Johnson wide open for a would-be walk-in touchdown.

Roethlisberger does end up throwing to Johnson eventually, but it’s far too late. The ball falls incomplete. 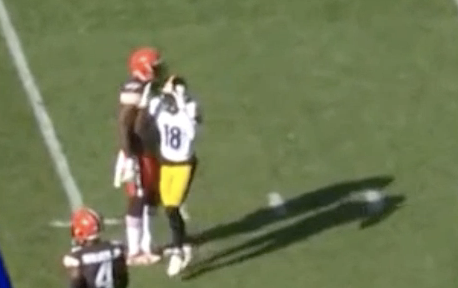 This is the reaction of someone that knows they just missed out on one of the easiest touchdowns of their career.

Who knew that the aftermath of this miss would ripple through the entirety of this game.

Following that play, Myles Garrett proved why he should never be left one-on-one.

Now, instead of a touchdown, the Steelers are faced with a 3rd and 17, where they choose to wave the white flag with a Najee Harris run.

As a fan, you’re like, “Okay. Take the field goal, stop the Browns’ two-minute offense, go into the half up 6-3, get the ball at back after halftime. Simple as that.”

Well, it’s the right thing to do, that is unless you’re Mike Tomlin being “aggressive.”

As you lay back in your couch ready to see the kicker, who’s missed only one kick all year, casually kick a “gimme” field goal, you see him catch a direct snap…

Steelers Nation’s collective faces as they watch Chris Boswell roll to his right: 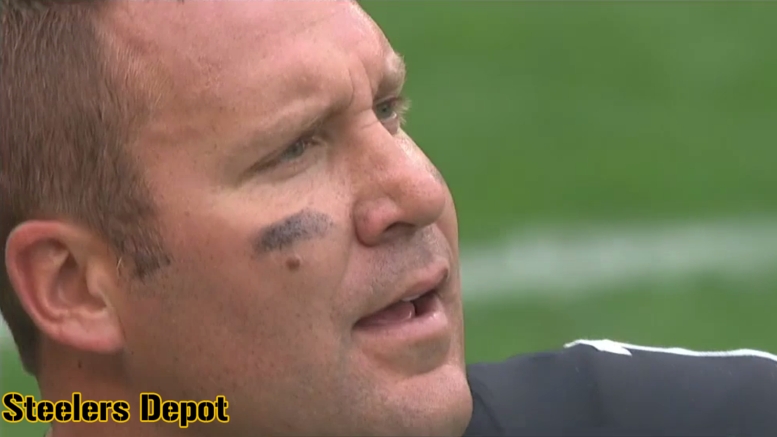 Being aggressive is one thing, however, was this the time or place?

Looking back to 2018, the Steelers were almost in the same exact situation. Only being able to score three points going into halftime and trying anything to get some points on the board.

Tomlin and Danny Smith didn’t reach too far into their bag of tricks as it was the same exact play that worked before.

Due to the similarities of situations, it’s safe to assume this play was reviewed a few times during the Browns’ special teams meetings last week. The Browns snuffed it out and Boswell had nowhere to go.

Losing out on points is one thing, but with the camera cutting to Boswell on his back on the sidelines, matters have gone straight from bad to a Freddy Krueger nightmare on Halloween.

Even though Chris Boswell is a kicker by position, on this fake field goal attempt, he is a passer. A defender cannot hit the passer forcibly in the head or neck area. IMO this should have been a 15 yard penalty for roughing in #PITvsCLE. pic.twitter.com/EXnOfledfv

Regardless of the bad call by Tomlin and/or Danny Smith on the fake, it was equaled by the non-call of roughing the passer on Boswell after he passed the ball. Clearly getting his helmet to helmet after releasing the throw.

Making it the turning point of this game.

While the fake field goal itself was not the true deciding factor in the game, the hands it forced in the later parts of the game truly turned out to be the difference.

Mike Tomlin told Tracy Wolfson he called the FAKE FG because they wanted be aggressive, #Steelers

Early in the fourth quarter, the Tomlin was forced to be aggressive one more time.

With Pittsburgh down a single point at the two-yard line and a third-down incompletion, it was decision time.

As a fan, you saw rookie punter Pressley Harvin III put on his helmet next to the long snapper and jog out onto the field.

After seeing his only kick sail out of bounds on a kickoff and the infographic that popped up on the bottom of the screen, reading “0 CAREER FIELD GOAL ATT/PAT IN NFL OR COLLEGE,”  a full-on yinzer panic attack was ready to set in.

The moment Harvin turned around and jogged back to the sidelines a collective deep breath was heard all around Steelers Nation.

Down one with a complete mystery for a field goal team, Tomlin chose to stay consistent with what got himself in this situation except one difference, the ball would be in the hands of a future hall of fame quarterback.

I say “Tomlin chose” lightly as it may have been all the decision of that aforementioned QB dawning the number seven jersey.

As Roethlisberger came to the sidelines before the fourth-down play, you could see the next play being drawn up in the dirt on the sideline with the QB coach Mike Sullivan.

Post-game Roethlisberger said, “Yeah, we talked about that on the sideline literally before that play. It was kind of a built play right there. Talking to Coach Canada and Sully [Mike Sullivan] and [Josh] Dobbs, we were actually trying to get Chase [Claypool] the ball just because of a look we thought we were going to get.”

The Cleveland defense showed man coverage across the board. Judging off of Roethlisberger’s comment and pump fake it indeed looked like Claypool was the first read, running a pivot route on the outside. Going through his progression to his second read, Big Ben let it rip to the rookie that never dropped a ball in the end zone his entire college career, Pat Freiermuth.

Watching him juggle the ball initially, it was a subtle “yes!” but the time between Freiermuth raising his arms and the referee confirming it, it felt like an eternity as a wave of relief and joy washed over like a wave.

It took an incredible catch from Freiermuth. Graceful and acrobatic, almost reminiscent of another famous 88 in Steelers history, Lynn Swann. (okay maybe not THAT graceful)

The concentration shown from Friermuth was elite. It honestly looked like he purposely let go of the ball initially as the defender’s hands were in the way with the intention of catching it again the second time with no interference. Then he was able to ensure getting both feet in bounds on the way down.

A question to ponder is if the Steelers chose to stay conservative and kick the field goal before the half, effectively keeping Boswell safe, how does the rest of the game play out?

Do the Steelers stay as aggressive around the goal line or continue to kick field goals?

Do these field goals help the Browns stay in the game and allow them to kick a field goal to tie or take the lead on their late fourth-quarter drives, where they were forced to go for it?

While I will not stand behind the choice to call a fake field goal in this situation it may have just created the perfect storm for the Steelers to get past this Browns team Sunday.