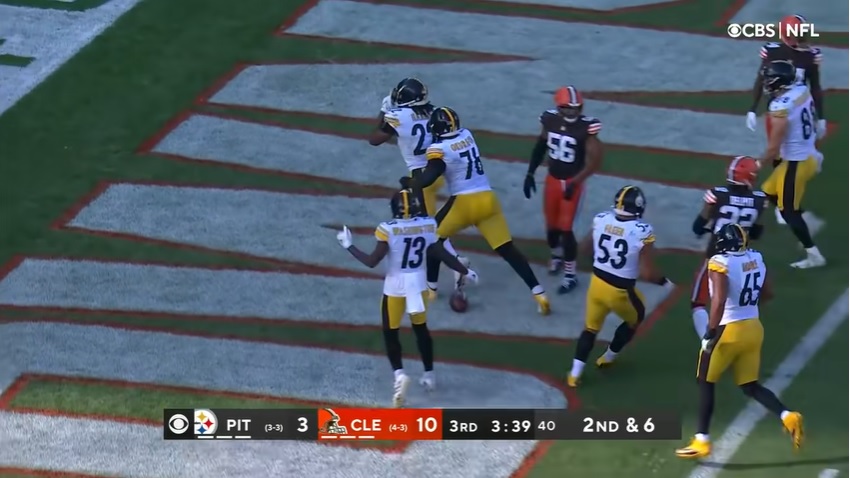 Though they mean very little. it’s always interesting to see how the non-Steelers world views the team. After a three-game win streak, it’s no shock to know there’s now a favorable view geared towards the black and gold. Following Week 8’s win over the Cleveland Browns, NFL.com’s Dan Hanzus bumped the Steelers up to the top half of the league’s power rankings to 14th place.

Here’s how he summed up the Steelers most recent performance.

“Playing without their kicker for the final two quarters in a tightly contested and physical AFC North matchup is a recipe for doom, but the Steelers still found a way by relying on some familiar elements: a suffocating defense that wouldn’t let the Browns open up their attack, and a quarterback in Ben Roethlisberger who made big throws at critical junctures behind a gradually improving offensive line. Now over .500 after a grisly 1-3 start, Pittsburgh gets back-to-back favorable matchups against the Bears and Lions. Win those games, and Mike Tomlin’s team could end up in first place as we approach Thanksgiving. Funny how this team always seems to find its footing.”

That’s up three spots from their ranking coming out of the bye week. It also jumped the Cleveland Browns in the rankings, who fell from 13 to 16.

The Steelers got a solid victory over a talented opponent, even if the victory against the Browns wasn’t always pretty. But it was a quality win over a team viewed to be one of the AFC’s contenders. Pittsburgh won the battle in both trenches, their o-line and d-line the more physical unit. It led to a 100+ rushing performance for the offense while holding Cleveland under 100 yards, a rare feat for them this year.

Pittsburgh still ranks third in the AFC North behind Baltimore and Cincinnati, illustrating how competitive the division is. The Ravens, off a bye, are 7th in Hanzus’s rankings while the Bengals are 11th even after their upset loss to the Jets this weekend. The AFC North has all four teams in the top half of these rankings, the only division in football who can make that claim.

Around the rest of the NFL, Green Bay vaults into the #1 slot after knocking off the previously undefeated Arizona Cardinals last Thursday. Buffalo is the top AFC team at #4. At the bottom sit the 1-7 Houston Texans, one spot behind the winless Detroit Lions. The Chicago Bears, Pittsburgh’s Week 9 opponent, is ranked at #24.