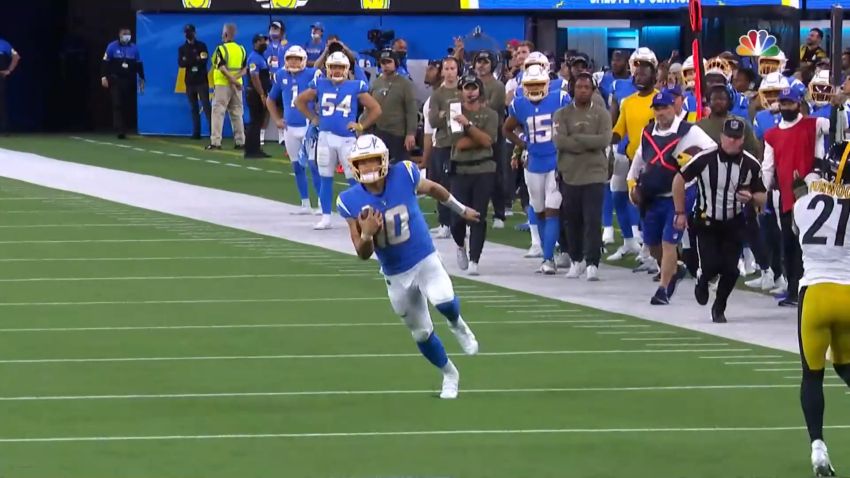 Another young quarterback with mobility, another big night on the ground against the Pittsburgh Steelers’ defense.

Two weeks ago, Chicago Bears’ rookie quarterback Justin Fields had a good night using his legs against the Steelers’ defense, rushing for 45 yards on eight runs. On Sunday night inside Sofi Stadium, Los Angeles Chargers’ second-year quarterback Justin Herbert had a historic night, according to The Athletic’s Sheil Kapadia, throwing for 382 yards and rushing for 90 yards in the 41-37 win, becoming the first quarterback in NFL history to hit those totals in a single game.

Justin Herbert passed for 382 yards and ran for 90 yards.

No quarterback in NFL history ever hit both those totals in a single game.

It was rather maddening to watch Herbert scramble for huge chunks of yardage against the Steelers’ depleted defense as Pittsburgh lost contain in their rush lanes and opened up huge lanes to scramble and make plays with his legs, carving up the Steeler defense.

Following the loss to the Chargers, Steelers’ defensive back Cameron Sutton wouldn’t take anything away from Herbert’s athletic abilities, giving the young signal caller credit for using his legs and taking advantage of situations in the game.

“You can’t take away any athletic ability from any guy. It doesn’t matter. Obviously if they have the opportunity and it’s there for them it might not look the same, but he exploited that,” Sutton said to reporters Sunday, according to video via the Steelers’ official YouTube page. “I don’t know if that’s a part of their game plan or obviously just in the moment type of things for him, but like I said, he did a great job of just maneuvering around the pocket, extending plays, and then obviously hurting us in those moments with his feet. So obviously hats off to those guys.

“We just got to get in the lab, correct the mistakes that we had on our end and keep pushing forward. We got a lot of ball left. Guys are not hanging our hats, guys are not down on themselves. Obviously we know we obviously put ourselves in that situation and then even then we still gotta be able to close,  being able to fight like that and put ourselves in a situation to come out with a win. Even though it didn’t come out the way we want it to, we can’t let it define us as a team, and we’ll be ready to go next week.”

Herbert certainly killed the Steelers’ defense with his legs, pulling the ball down early and often against a depleted Steelers’ defense, chewing up easy chunks of yardage on the ground as the Chargers moved the chains time and time again, leading to the 41-point outburst against the Steelers in primetime.

Once again, the Steelers were seemingly caught off guard by a young quarterback using his legs in key moments, even if Steelers’ head coach Mike Tomlin spoke after the game regarding Herbert’s scrambling abilities, stating that his success was more about what the Steelers didn’t do correctly.

It’s not starting to add up, and if it is a Steelers-only issue, it’s past time to get it corrected, especially with the Steelers missing so many key players in the front seven and on the back half.

Fields’ scrambling abilities didn’t beat the Steelers two weeks ago, but Herbert’s sure did. They’ll have to get it fixed and fast, especially with guys like Baltimore’s Lamar Jackson, Tennessee’s Ryan Tannehill and Kansas City’s Patrick Mahomes still remaining on the schedule.