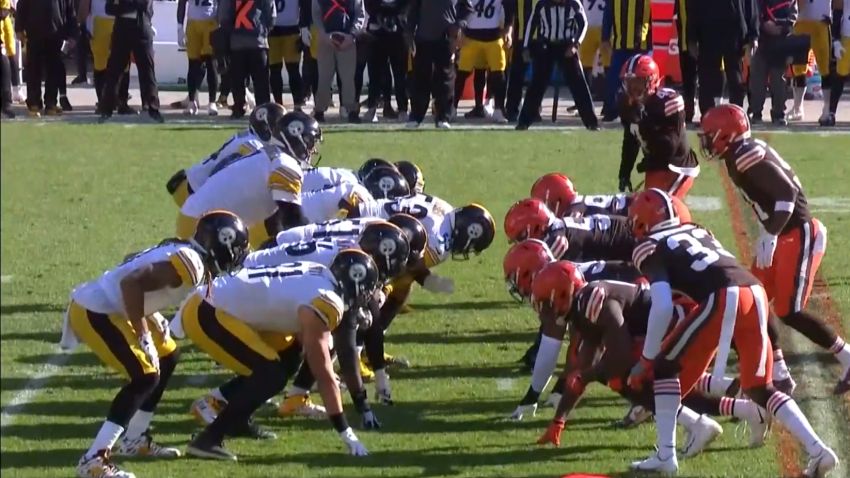 The Steelers defeated the Browns Sunday in an AFC North tilt that could have massive playoff implications. The 15-10 win on the road was a total team effort from the Steelers.

A main takeaway from the win was the Steelers winning in the trenches. The run game was highlighted as the key to the game all week leading up to it. The Browns came in averaging 170 rushing yards per game, tops in the league.

In addition, the Steelers run defense had been suspect as of late, while the offensive run game had shown signs of life. No Kareem Hunt certainly helped, but the defense helped limit Nick Chubb tremendously. Coach Mike Tomlin addressed the run game on both sides of the ball from Sunday’s win.

”I thought the run game component was a significant component of the matchup and the reason we were able to secure victory. Cleveland is elite in terms of the ability to run the ball, but also the ability to stop the run,” Tomlin said Tuesday in his press conference via the Steelers website. “We were able to run the ball and stay on schedule on offense in the manner of which we would like to.”

The Steelers accumulated 115 rushing yards on the day. Najee Harris obviously accounted for most of them, picking up 91 yards on 26 carries. On paper, the 3.5 yards per carry from Harris seems pedestrian. Those numbers though aren’t reflective of how effective the Steelers were. Harris’ runs in obvious run situations late in the game dragged down those numbers, too.

Offensive coordinator Matt Canada’s creativity came out a bit in the running game as well. Chase Claypool had a 16-yard run. Ray-Ray McCloud had a 10-yard run as well as one that was called back on a holding penalty by James Washington.

The offensive line’s blocking deserves credit as well for the run game success.

The inexperienced line seems to be getting better and better each week. Tomlin mentioned how the success helped them get into better third down situations, something that’s been a topic of conversation all season.

Referring back to the run defense, Nick Chubb was held to 16 carries for 61 yards, 3.8 yards per carry. Backup D’Ernest Johnson has four carries for 22 yards, including a 10-yard touchdown that almost wound up being costly. Devin Bush let Johnson get to the inside after Minkah Fitzpatrick already had the outside contained.

“It was very important that we minimize their run game and Nick Chubb and in an effort to get them in some third and long-like circumstances where we can do some of the things we like to do. I thought we tackled well largely on defense.”

Tackling was a major issue in the Week 6 win against the Seahawks. As Tomlin mentioned, the defense was able to shore up that aspect of things. The ability to slow down the run forced the Browns to not be able to do play action as effectively either.

The run game, on both sides of the ball, was the biggest contributor to the Steelers’ road win. That remains the case for the rest of the season with this team. They don’t exactly possess a high-octane aerial attack.