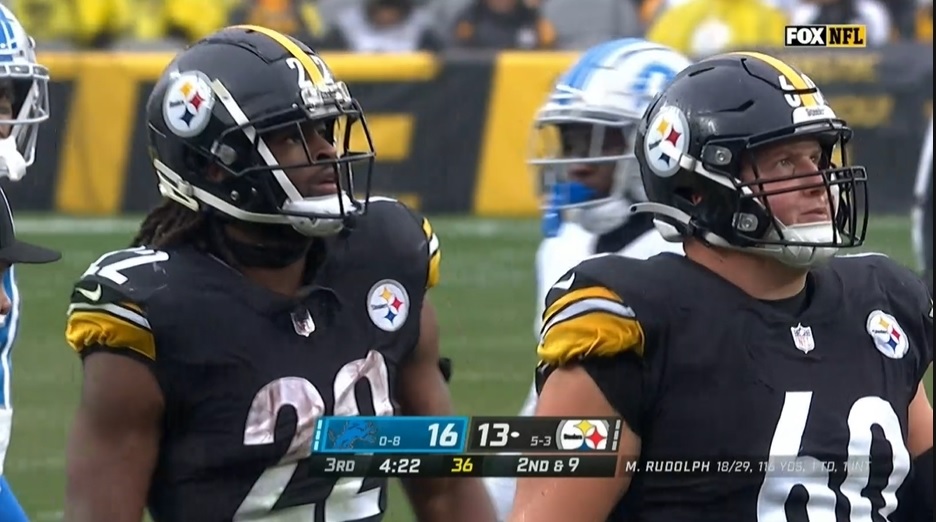 Harris continues his pace for over 400 touches this year with another 30 in this overtime game.  He finished with his second career 100 yard rushing game and averaged over four yards per carry for the third time this season. He continues to display the play strength to drag and push through defenders for extra yards while showing very good ball security.

He made extra contributions in the passing game this week. He caught all of his four targets with three of them coming on check releases to the middle of the field.  After the catch he averaged over seven yards per catch. He did bump Ray-Ray McCloud on a fly pass on a second and one (which is an awful play call) but the play looked doomed anyway.  He was asked to pass protect more in this game than he probably has all season and while the technique was sloppy at times the awareness was not.  He did fairly well throughout the game. He also had a nice block on a reverse field scramble by Mason Rudolph.

Here was my favorite pass block by Harris (22). The middle linebackers are mugging the A gaps and then cross.  Harris engages Jalen Reeves-Maybin (44) but displays the mental processing to recognize the twist and picks up Alex Anzalone (34) and drives him to the left.

He continued his run of at least six targets in each of the last four games. His route tree continued to be somewhat diverse but his receptions came on curl, flat and out routes. He had and uncharacteristic drop in the flat and the killer fumble at the end of overtime. The anguish on his face told the story there. He needs to work on being quicker within the route and creating space. He really doesn’t threaten defenders versus Man coverage. He was also open on two corner routes to the left sideline against Zone coverage but Rudolph went to the other side both times.

His run blocking was a little bit better this week.  He was able to sustain a tad better and that is really all they need from him.  I do appreciate that when he shifts he makes sure teammates know if they need to move up or back from the line of scrimmage. He has a good awareness of the offensive alignments.

The man in the middle had a solid day overall.  He played every snap for the sixth consecutive game and showed some inconsistency sustaining his run blocks. Usually he plays to the snap but on some plays he didn’t finish. On his combo blocks he must improve on shifting his body to square up the defender when the other blocker climbs to the second level. He did continue to show good mobility to the second level and downfield.

I thought he was better in pass protection his week.  There was some improvement to his punch and he did a solid job head to head with a defender right over him. He did get bulled back to the quarterback one time but was better in that area. He had five snaps that were all snapped to the right of the quarterback with too much velocity with one going over the head of the backfield. Was it the gloves he was wearing that became extra sticky in the wet weather? Maybe that was it but whatever the cause that cannot continue.

It was a rough game for Moore especially the first half of the game. He struggled especially against the wide nine alignment of Charles Harris.  He was driven back on bull rushes four times and struggled handling rips on the outside and spins to the inside.  I still think he would benefit from engaging the rusher sooner and with less depth in the backfield. Also lower hand placement and more use of chops could benefit him.  He did show some improvement in the second half which is showing his is adjusting as he goes. His awareness on stunts was good overall.

As a run blocker he was a little slow out of his stance leading to him being pushed into the backfield on a few plays. He continues to be good on hinge blocks and down blocks pushing defenders to the inside. He needs to sustain a little on combo blocks especially when working with backup guards before climbing to the second level.

Moore (65) has struggled versus bull rushes. In the first play he lets the defender get his hands inside while his hands are too high losing the leverage battle.  On the second play he shifts his hands inside and lowers his pad level to stop the rush.

Loudermilk saw his highest snap total of the year and that included nine in overtime. He continues to be aligned in different spots.  He was the 1/3 technique with two defensive lineman on the field, the 4i on bear/tite fronts and the 5 technique when the Steelers overloaded to one side on one snap. The development continues and he is best against the run.  His hand placement is good, has the play strength to hold his ground and does a fine job cutting of his gap. The pass rush is still a work in progress but he did get some solid movement late in the game with bull rushes.

He had two tackles in this game and both shown below were personified by his effort. The Steelers are developing some young defensive linemen and Loudermilk is earning his reps.

Here are Loudermilk’s (92) two tackles. He stays square moving with the blocker before extending for the first tackle.  On the second he held his ground against two blockers before wrapping up the runner.

Norwood got his second start of the season as he opened up as the strong safety with Terrell Edmunds playing in the box. He saw his highest snap total since week two and he made his mark in the game with two pass break ups late in the game. After the early snaps at safety he played mostly as the nickel corner.

His lone tackle came on a short throw to the outside where he ended up after Devin Bush noticed no defender out there. His first pass breakup came late in the fourth quarter on a fade route and he played it well to not commit pass interference and very good timing to get a hand on the ball.  The second was in trail Man coverage where he undercut the route and nearly made the interception. One thing I’ve noticed with him is he seems to know his role, where he is supposed to be and is rarely out of position.

Congratulations to Harvin on making his first career tackle. I wish he didn’t have to but he probably saved a touchdown.  The consistency we have been looking for was there in this game. He dropped three punts inside the twenty and with better work from the coverage team he could have had a fourth rather than a touchback.  The three punts inside the twenty travelled 39, 46 and 39 yards. A 45 yard kick became the touchback. He two longest punts (61 and 50 yards) were returned for 48 and 18 yards. He handled all field goal snaps well.