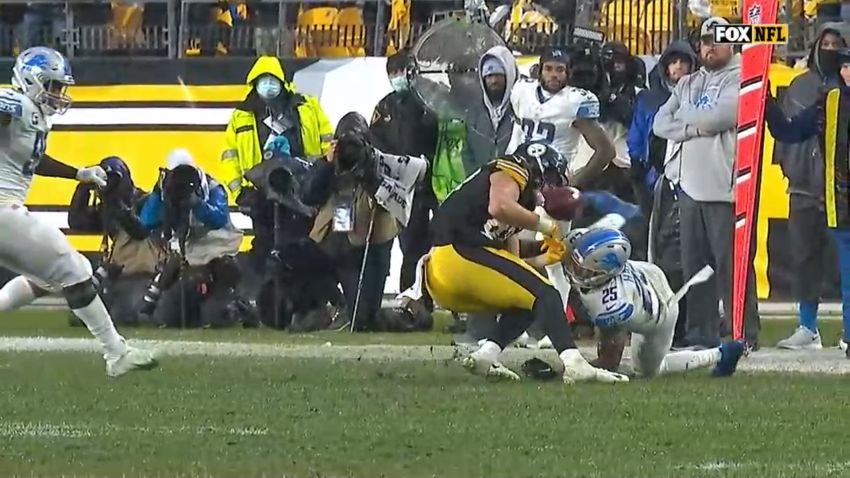 The Pittsburgh Steelers’ last two games have seen a lot of things happened that couldn’t reasonably be described as great football in any context. They didn’t lose either of them, so at least there’s that, but thanks to what as far as we know may be an NFL first, they also didn’t win both.

According to Pro Football Reference, who tracks play-by-play data, but which only goes back to the 1994 season, tight end Pat Freiermuth’s fumble on a play run with 15 seconds remaining in overtime is the latest that a turnover has ever been committed in a game—relative to the end of an overtime period.

Pat Freiermuth fumbled the ball with around 10 seconds left in overtime, sealing a tie in the Lions-Steelers game

Our play-by-play data goes back to 1994. This the first time in that span that a turnover happened with under 30 seconds remaining in OT https://t.co/NgFAvY73rL

There have been postseason games with multiple overtimes, and I’m sure in one of them, there was a turnover in a second or third overtime period. Overtime used to be 15 minutes long, and I’m sure there’s been a turnover with 13 minutes expired.

But every overtime period is unique, in that it could be the end of the game—and in the regular season, of course, it is, because there’s only one. Freiermuth’s fumble almost literally was the difference between a tie and a possible win, because his reception put the Steelers within reasonable field goal range for kicker Chris Boswell.

Instead, the Detroit Lions recovered the ball at their own 38-yard line with eight seconds to play. They tried to lateral multiple times before being pushed out of bounds after 22 yards to send both teams home, neither particularly happy about the outcome.

It is particularly unfortunate for Freiermuth, who was coming off of a string of consecutive games in which he made fantastic catches for touchdowns. While he has certainly earned some leeway, this was obviously the worst game of his career, having also dropped a pass earlier in the overtime period.

And then he became the first player to fumble within the final 30 seconds of an overtime period since at least 1994, or, in other words, he is the first person to do that in the NFL while he’s been alive, having been born in 1998.

I doubt the fans are going to dump on Freiermuth too badly—after all, he’s not the only player who made a bad mistake, with wide receiver Diontae Johnson fumbling after a big catch and run on the previous drive.

According to Pro Football Reference, the only other fumble inside of the final minute of an overtime period since 1994 was also by the Steelers, when Ben Roethlisberger was sacked by the Cleveland Browns’ Genard Avery in 2018—and recovered by Joe Schobert.

The Browns ended up attempting a field goal from 43 yards out, which missed, and yes, that game also ended up in a tie.