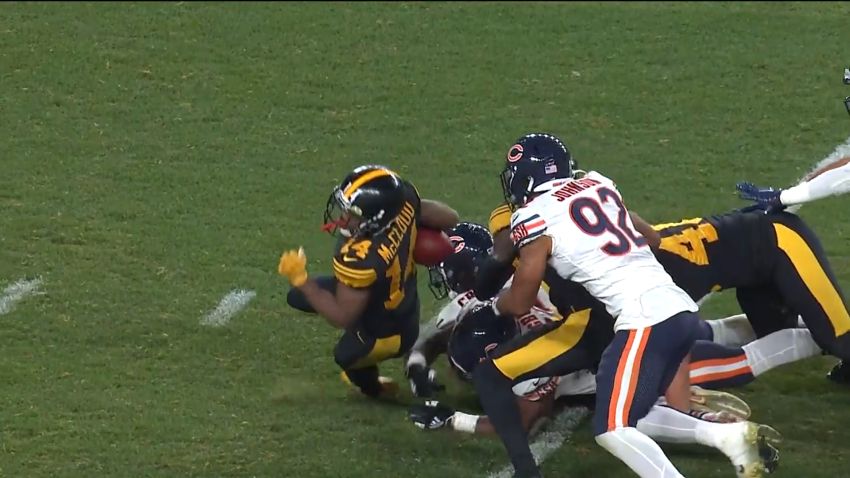 It was a surprise when Ray-Ray McCloud first made the 53-man roster in 2020. A third-year journeyman who was only signed in training camp, and us having had no access to the team due to closed practice and no preseason, most figured he was a proverbial ‘camp’ body, but he ended up being the Pittsburgh Steelers’ return man.

And he returned for another season. But one wonders how much he just put his job in jeopardy last night after he coughed up the ball on a punt return, which the Chicago Bears scooped up and returned for a touchdown during a fourth-quarter, 10-point game into a three-point game and nearly costing Pittsburgh in the end.

“You definitely can’t turn the ball over and give up scores in the kicking game”, head coach Mike Tomlin said in the opening statement of his post-game press conference. “You do that, there’s a high probability you’re gonna lose, let alone be in a tight game. We’ve got to hang onto the ball. We can’t give up scores in the kicking game. When you do, boy, you better knuckle up, and they did, and so I’m thankful for that”.

Coach Tomlin speaks to the media following our win over Chicago. pic.twitter.com/sgMIS4xh8J

The Bears ended up coming back and scoring a go-ahead touchdown, making it 27-26 with 1:52 to play, but Ben Roethlisberger and the offense were able to do just enough to set up Chris Boswell for a game-winner—albeit with enough time left on the clock to afford Chicago a shot at a desperation 65-yarder of their own.

Asked about whether or not McCloud was simply trying to do too much in his return at that point in the game, Tomlin almost cut off the question, simply saying, “I don’t care what it was, it was unacceptable”.

The first job of any return man is securing the ball. That is in terms of both fielding a punt or a kick and then in maintaining possession to hand it off to your offense. Gaining any yardage on a return comes entirely secondary to that.

This is McCloud’s third fumble of the season, and the second in the return game. It’s his fifth over the past 24 games with the Steelers, and his 10th since entering the NFL across 40 games played. Given that he doesn’t play much on offense, that’s awful ball security.

McCloud has 40 career offensive touches, 49 punt returns, and 54 kick returns. That is 153 total all-purpose touches, and 10 career fumbles. In other words, he puts the ball on the ground once every 15.3 times that he touches the ball. You can’t have that on your offense, and you certainly can’t have it in the return game.

It’s unacceptable. And now we’ll see just how much Tomlin will be willing to accept. They have a viable return option on the practice squad in Steven Sims, who has worked with wide receivers coach Ike Hilliard in the past with Washington.