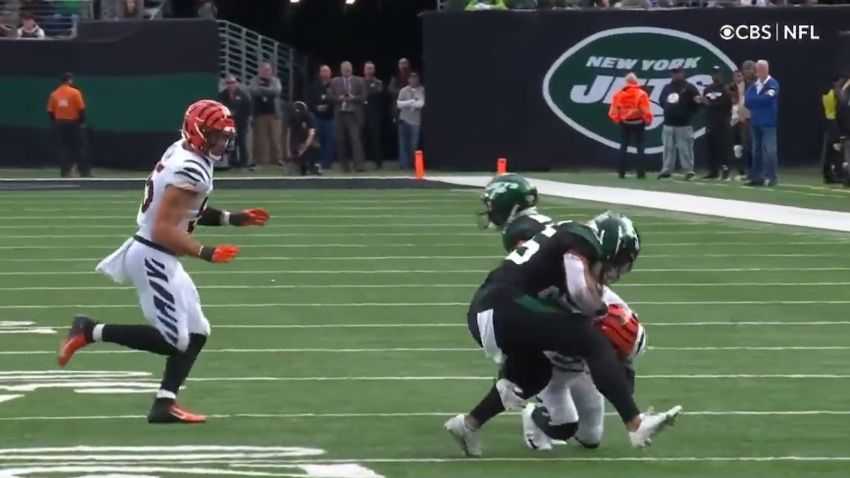 Not every fan is interested in keeping up to date with his favorite team’s former players, even if those players were once fan favorites, as was former Pittsburgh Steelers cornerback Mike Hilton. When the fifth-year veteran signed with the division-rival Cincinnati Bengals as a free agent, a lot of Steelers were not happy with his decision, and let him know.

Hilton already has a win over his former team, with the Bengals at 5-3 and the Steelers at 4-3, but Cincinnati just dropped a surprising game to the New York Jets, allowing a quarterback most had never heard of to throw for over 400 yards with three touchdowns in his first start.

And a late-game penalty against Hilton helped close out that game, one that has been roundly criticized. The physical nickel back was flagged for unnecessary roughness, the argument that he lowered his helmet into Jets running back Ty Johnson with two minutes to play.

Johnson, however, clearly lowered his own helmet and met Hilton’s at a low angle. This play occurred on 3rd and 11 with New York nursing a fragile 34-31 lead, with the Bengals in possession of all three of their timeouts. The play itself lost one yard. Instead of 4th and 12, it was 1st and 10, and the Jets were able to close out the game from there with Joe Burrow not getting another shot.

“I just don’t know what a tackle is anymore!”, Hilton Tweeted shortly after the game on Sunday. “It’s fine we will bounce back! Much more left to accomplish!”.

I just don’t know what a tackle is anymore! It’s fine we will bounce back! Much more left to accomplish! #RuleTheJungle #Bengals

You can judge for yourself via the gif below, but I would imagine that a lot of football fans, especially those with more experience watching the game for some decades, will be rather sympathetic to Hilton here, who clearly took the worst of the interaction and yet still received what was likely a game-sealing penalty for it.

This was called “unnecessary roughness” on Bengals CB Mike Hilton. One of the worst calls you’ll see… #Bengals pic.twitter.com/hN99XpOZNK

With three timeouts, the odds are good that the Bengals probably could have at least managed a game-tying field goal with just under two minutes left to play, had the play run without the penalty and a punt ensued. Cincinnati has a potent offense this year, particularly with rookie wide receiver Ja’Marr Chase, who is already becoming a premiere deep threat.

Even though Cincinnati put up 31 points, the Jets still did a good job of limiting the Bengals’ possession. They controlled the ball for just under 24 minutes, and ran only 54 plays compared to New York’s 78 plays. The Bengals had only two drives last three minutes or longer, with most under two.