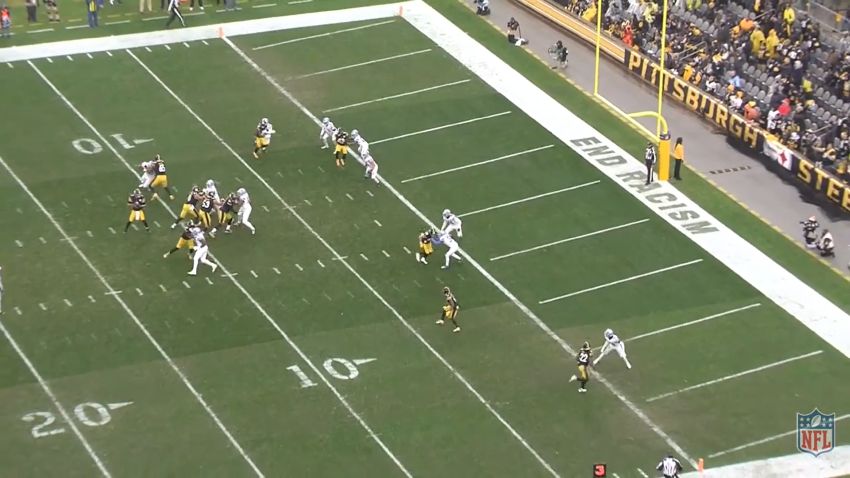 In terms of what actually happened on the field on Sunday, there probably wasn’t a play that was talked about more than the incomplete pass on 3rd and goal from the five from quarterback Mason Rudolph, intended for Ray-Ray McCloud, who had a career-high nine receptions on the day.

The broad consensus was that Rudolph simply made a bad throw. Watching it live during the broadcast, you merely see the ball skidding near the wide receiver’s feet as he slides back toward the play trying to scoop it, having taken his route into the end zone.

“No miscommunication. Just missed execution”, McCloud said when he spoke to reporters yesterday. He didn’t, however, say whose execution failure it was. “Just, throughout the game, we didn’t execute on certain plays, and that’s something that bit us on the butt towards the end”.

Former Steelers running back and current NFL analyst Merril Hoge offered an analysis of the play that bucks the conventional wisdom and contends that it was partly McCloud’s fault—and partly the Lions’ fault for unintentionally creating confusion for him.

“The history of the Detroit Lions this season, they constantly make mistakes in the secondary. They constantly are making busts”, he said during a Steelers Live episode yesterday, which we highlighted on Twitter. “The Washington one, it was a bust. They don’t handle things very well. If you go back when they lost to the Ravens? A bust. Half of their games, late in the game, bust”. He went on to discuss that McCloud incompletion in particular:

Well, that actually was another bust. The route probably threw Mason off. I’m not gonna blame Mason on this one, because [McCloud] went out and then he went back in. I mean, he didn’t give him any clarity, and I think that’s because he was confused because they busted the coverage. He didn’t run the route he was supposed to. He bailed on the route he was supposed to, and that’s why it ends up being a bad throw. People are going to point the finger at Mason, but if you looked at the coverage bust and the confusion in the route, then really the burden goes on the receiver, not the quarterback. You’ve still got to do what you’re supposed to do, even with the busted coverage. That threw him more, quite honestly, in why he made a bad throw versus, he just missed the throw.

The All-22 tape is actually pretty revealing. The Steelers ran five-wide out of 11 personnel in a 2×3 alignment. Tight end Pat Freiermuth was near the line in the right slot, running back Najee Harris outside the numbers on that side, with McCloud in between them. The Lions were showing what looked like man coverage.

However, both of the interior defenders immediately jumped to cover Freiermuth, leaving McCloud open as he stopped and turned at the four-yard line after executing a short curl. It was as he saw the opening and started to drift into the end zone that Rudolph released the ball.

It does look like there’s credence to what Hoge is saying—that McCloud’s route was designed basically to end up close to where Rudolph put the ball, and that he didn’t have time to adjust the throw given the timing of McCloud’s unscripted break.

So is this a case of the Lions’ own ineptitude saving themselves a touchdown? Well, at the least, it helped induce the Steelers into an unforced error of their own, failing to take advantage of what everybody knew during the broadcast should have been an easy touchdown, without knowing exactly why.

Oh, man, Merril Hoge is going to get some hate mail for blaming the missed TD throw by Mason Rudolph to Ray-Ray McCloud on the wide receiver. I wonder if Merril ever played football before #Steelers pic.twitter.com/4mv3fCYmMg