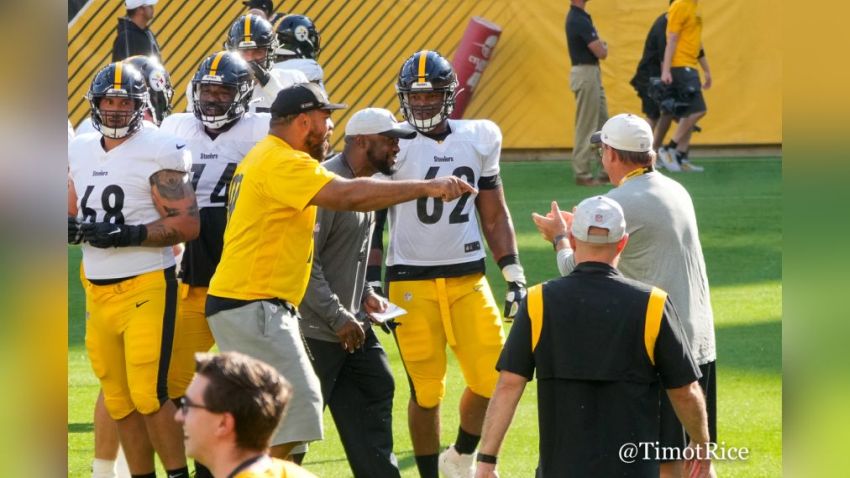 Pittsburgh Steelers head coach Mike Tomlin has been getting a lot of press in the past two weeks, for achieving some significant milestones. In their first game after the bye week, their victory over the Cleveland Browns marked the 149th of Tomlin’s head-coaching career, tied for the 20th-most all-time—with former Steelers Hall of Fame head coach Bill Cowher.

He passed Cowher and became just the 20th head coach in NFL history to reach 150 victories with the Steelers’ Monday night win over the Chicago Bears, which, when you look at the list of coaches who are ahead of him, raises a question: does he have a Hall of Fame résumé?

“Duh”, was defensive captain Cameron Heyward’s answer to that question when it was posed to him on Thursday before practice, courtesy of video of his media availability session provided by the team’s media department.

Of the 19 head coaches in NFL history with more wins than he has, 10 are in the Hall of Fame. The list of others includes two active head coaches who are destined to make it in Bill Belichick and Andy Reid. There are other strong contenders like Mike Shanahan and Tom Coughlin, as well. Notable names such as Marty Schottenheimer and Dan Reeves may be held back due to their lack of Super Bowl titles.

Tomlin doesn’t simply have 150 victories due to longevity, however. He has the fifth-best winning percentage of all head coaches with 150-plus victories, led only by Don Shula, George Halas, Belichick, and Paul Brown. His winning percentage is eighth among the 43 head coaches with 100-plus victories, adding John Madden, Tony Dungy, and George Allen to the list.

While Heyward’s answer was succinct and unambiguous, quarterback Ben Roethlisberger—who was drafted by Cowher two years prior to Tomlin coming on board—gave a more measured response that ultimately came to the same conclusion, albeit with far more caution and qualifications.

“I don’t know what qualifies for coaches. I’m not sure if there are criteria, but I know he’s got a Super Bowl, he’s got a lot of wins”, he said on Wednesday when he was also posed the question of whether or not Tomlin is a Hall of Famer. “If you ask me, I would say yes. I just don’t know what the criteria are”.

This is something that has been bandied about back and forth even amongst us here. There are those who are certain that he already has the bona fides to get in the Hall of Fame right now if he never coached again. There are others who believe that he still needs to bolster his achievements, particularly in the postseason, in order to be a lock.

This is a question for the future, however. Tomlin doesn’t look to be following Cowher’s lead and retiring after 15 seasons. He’s already under contract for the next three years after this, and I do believe he will fulfill that contract. How much longer will he coach after that? It could depend on what they turn up at quarterback in the post-Roethlisberger era.