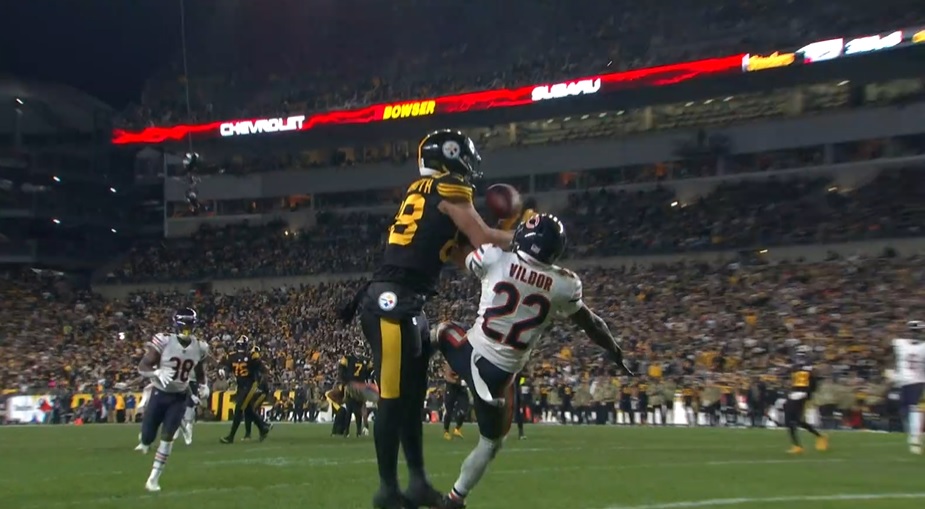 You’ve heard it before but I’ll say it again because he makes it so easy to repeat. Pat Freiermuth catches everything. Said it in the summer, said it in the preseason, and it wasn’t standard-fare Steelers’ homerism. Freiermuth has the best hands on the team, arguably some of the better hands in the league, and he showed it once again in Monday’s win over Chicago. Pittsburgh went 3-3 in the red zone with two passing scores, each landing in Freiermuth’s hands.

How he caught them and won came in different ways. So let’s look at each.

The first came on some classic Ben-ball. Scramble drill with the line doing a great job of giving Roethlisberger time, 4.8 seconds according to NextGen Stats. Aligned in the left slot, Freiermuth initially sits down after running a stick route. But realizing the play is breaking down, he starts moving with Roethlisberger, first to his right away from the defender and then back to his left as Roethlisberger points out to him where to go.

A great feel for Freiermuth of understanding the grass he had to run to and where the sideline was, keeping his eyes on Roethlisberger the whole way and making the catch for the TD.

The second was of a different variety. 3×1 formation with Freiermuth isolated as the backside “nub,” an increasingly common formation Matt Canada has run over the last month. Freiermuth is standing up here with a reduced split on a little out ‘n up. The split gives him room to get wide before stemming upfield.

Freiermuth is going against Kindle Vildor, a cornerback who is much smaller than him, and whose back is turned to the ball. As he did on 4th and goal against the Cleveland Browns, Ben Roethlisberger (who said a defender with their back turned means the receiver is open) throws the ball to Freiermuth.

Freiermuth does a great job to track it and reach over Vildor to make the catch, securing it on the way down when a lot of guys (like Bears’ TE Jimmy Graham) would’ve been unable to complete the catch. A textbook “combat catch” type of play in the red area. And on 3rd and 8, no less. Four points created because of Freiermuth’s play.

While those were the touchdowns and biggest plays of the night, don’t forget about this clutch 13-yard grab on the Steelers’ game-winning drive. Facing 1st and 15 right on the edge of field goal range with under a minute to go, Freiermuth did well to come back for the football and make a basket grab for a good pickup.

Freiermuth has the ability to catch the ball from all angles and platforms. Not just ones over his head or behind him. High, low, outside, inside, it doesn’t matter, he makes them all look the same and effortless. And they most certainly are not.

That doesn’t even factor what he did in the run game, an asset on WR perimeter runs that we will talk about later in the week. He continues to make an impact as a lead guy out in space. He really does feel like Heath Miller and certainly mimiced his performance with a clutch performance to help push the Steelers’ win streak to four games in a row.