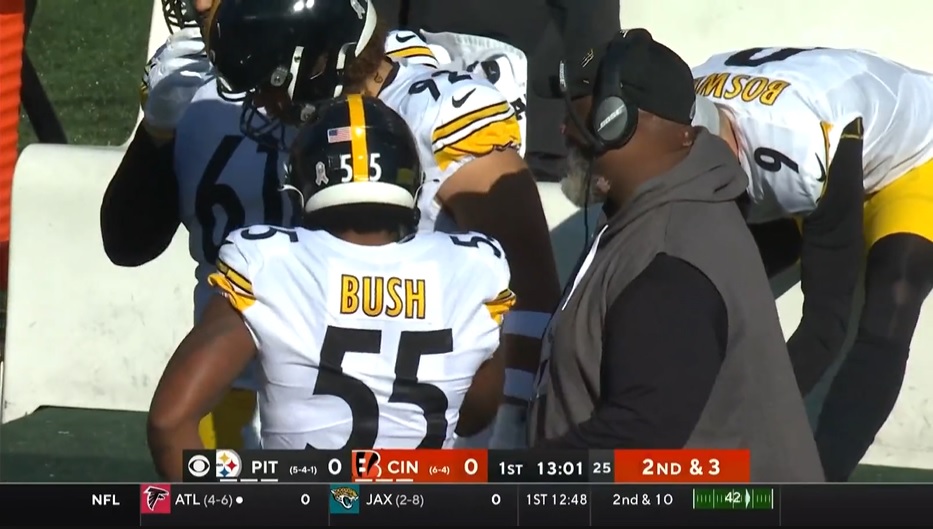 The Pittsburgh Steelers got throttled by the Cincinnati Bengals Sunday in the Queen City by a score of 41-10. It seemed as if Pittsburgh never got off the bus to show up for this game as the Bengals controlled the trenches on both side of the football in this matchup, holding Pittsburgh to 51 rushing yards on the day while they proceeded to rack up 198 yards on the ground. The run defense has been gashed in a big way the last three games, seemingly not being able to stop a nosebleed as RB Joe Mixon had a field day, rushing 28 times for 165 yards and two TDs.

While a large majority of the defense struggled in this one, LB Devin Bush continued to stick out on film with his poor play and seemingly lack of consistent effort. Analytics would agree as Pro Football Focus gave Devin Bush a team-low grade of 27.4 for his play against the Bengals. For the season, Bush has a grade of 32.6.

All you must do is watch the first drive of the game to see Bush’s inability to execute stick out on tape. Watch on this run by #28 Joe Mixon where Bush starts to run toward the hole and successfully gets across the face of #66 Trey Hopkins into the gap, but he fails to aggressively shed the block and attack downhill, instead staying locked onto the block and tries to drop his eyes and reach out with his right arm at the last second to arm-tackle Mixon who blows right past him for the 25-yard run.

Even when Bush shows effort on some plays, his awareness and processing can be off, taking him out of the play. Shortly after the big run, we watch Bush drop down to the end of the LOS, but line up offsides drawing the flag. When the ball is snapped, Bush successfully rips off the block by #83 Tyler Boyd but takes a bad angle to Mixon, flattening his pursuit instead of taking the angle to cut him off. Either way, the play is a bust since Bush gives Cincinnati five free yards.

Near the goal line, we watch Bush finally get in on a stop where Mixon only gets a short gain up the middle on the option run. However, watch as Bush is a tad slow to see that Mixon is bouncing back to his right after Bush fills the hole, running straight into the blocker instead of reading and reacting to Mixon’s cut. Bush should push off his right foot here laterally to get to Mixon, but he stalls his feet, delaying his time to the ball. He executes his initial assignment, but Bush shows his delayed reaction here.

If you want to see poor effort, many pointed out during the game this point-after attempt where Bush lines up for the block but chooses to sit in his stance after the snap of the ball while the rest of his teammates try and execute the block. Granted, there is little chance that Bush gets to the ball on this play, but the lack of effort shown on this play can be damning when the rest of your teammates are playing hard in attempt to affect the play.

While Devin Bush deserves a lot of the criticism given to him, it has to be recognized the plays that he does make as a run-and-chase linebacker. For instance, watch this run by Mixon where Bush works to the right and meets LT #73 Jonah Williams at the second level who gets a hit on Bush, but Bush uses his hands to stack and shed the block, playing with good knee bend to stay upright on initial contact and manages to get in on the tackle of Mixon.

Later in the fourth quarter, we watch Bush drop into zone coverage over the middle of the field and see the dump off pass to #34 Samaje Perine where he then breaks on the ball, chopping his feet as he breaks down to wrap-up tackle Perine shortly after the catch.

While there are instances where Bush does execute his assignment, there are far too many negatives that stick out to absolve the flashes of good play we see. Not only is Bush’s effort in question at times, but his aggressiveness and physicality just aren’t what it used to be coming out of Michigan and during his rookie year. He plays tentative and almost scared when taking on blocks, being afraid of contact rather than relishing it. Watch on this run from the I-formation to the right sideline as Bush lines up on the edge and gets outside leverage on #89 Drew Sample but continues to give ground and exposes his back to Sample as Mixon cuts up the middle rather than working across Sample’s face.

Here on the one-yard TD run by Mixon, we watch Bush have an angle on the edge to pursue Mixon in the backfield but chooses to work laterally to try and meet him in the gap. Instead of staying low and shooting the left side B-gap to make a play on Mixon, Bush runs straight into Williams who gets a block on #93 Joe Schobert, picking up two guys for the price of one as Mixon plunges forward to cross the plane for the score. Whether it be the concept of flying through the open gap to pursuing Mixon from behind, Bush chooses to try and run around the blocks rather than put his face in the fan, cost the Steelers defense.

There is no denying Bush is currently a shell of his former self out there at the moment, lacking the aggressive demeanor, play recognition, and consistent effort to be considered a reliable starter. I understand the man went through a significant knee injury a year ago, but based off what shows up on film, the constant issues in Bush’s play appear more mental than physical at this point. We at Steelers Depot often highlighted the lack of splash plays Bush made coming out of Michigan and questioned whether and undersized linebacker that has great athleticism but lacks a history of impact play would transition to the league.

Prior to the injury, it looked like Bush could suffice as a sideline-to-sideline linebacker that can be an effective blitzer and has the speed to run with backs and tight ends in coverage. However, Bush can’t even do those things consistently at the moment, lacking that edge and sense of urgency to fly around and make plays. Bush’s fall from grace has been quite disappointing as it looks like Pittsburgh has swung and missed on another defensive first round selection (Artie Burns, Jarvis Jones, Ziggy Hood, etc) as it would take a lot for Bush to turn things around this season. He still has 2022 to try and rectify these wrongs, but it doesn’t look like Bush will get his fifth-year option picked up.

What are your thoughts on Devin Bush’s performance against the Bengals? Do you think he needs a mulligan on this season given the ACL injury in 2020, or that he shouldn’t be abstained for his poor play to date? What do you think happens with Bush the rest of this season and into 2021? Please leave your thoughts in the comments section below and thanks again for reading!