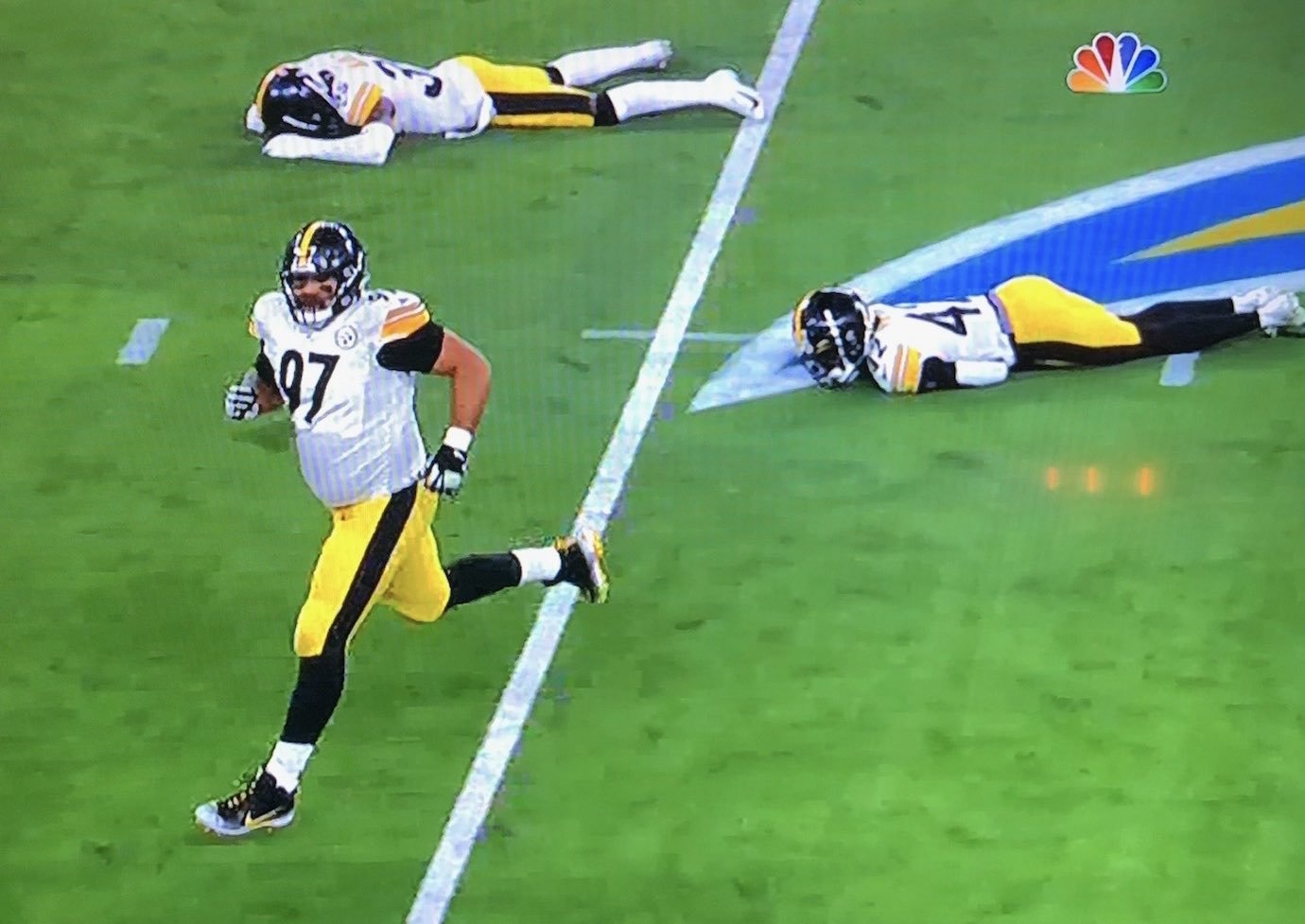 The Pittsburgh Steelers nearly pulled off the comeback of the year against the Los Angeles Chargers Sunday night, falling short in a barnburner of a game by a score of 41-37. In a game where there was hardly any defense to be seen on both sides, DT Cam Heyward rose to the occasion as the lone star play on the defensive side of the ball available for Pittsburgh with T.J. Watt, Minkah Fitzpatrick, and Joe Haden all ruled out prior to the game. Heyward is known for being the emotional leader of the team and his play stood out in a big way in this contest, displaying the fight and relentless effort to keep Pittsburgh in this game despite the low chances at a comeback.

Heyward only registered two solo tackles and a pass deflection on the stat sheet in this contest, but his impact far exceeded what an initial look at the box score would suggest. His effort was phenomenal in a game where Pittsburgh surrendered 533 total yards of offense: the most allowed by a Steelers defense since 2013. Heyward almost had two sacks added to his stat line in this contest. The first came on this play where Heyward hits the arm over move on former Steeler #71 LG Matt Feiler getting into C #63 Corey Lindsay before reaching over to wrap up #10 Justin Herbert for the sack. Sadly, the play would be wiped out by a defensive holding penalty.

Heyward almost has another sack here on this pass play in the third quarter, using the long arm move initially off the snap then utilizes the cross chop on Lindsay to cross his face as he accelerates into the backfield, chasing down Herbert in the pocket and wraps him up for the would-be sack, but Herbert manages to find #5 Joshua Palmer for the check down option to avoid the loss of yardage.

While the run defense struggled miserably through the entire contest, often times the Chargers saw success running the ball away from Heyward or exploiting matchups when Heyward was off the field. Heyward commonly got good penetration into the backfield, using his strength and leg drive to walk back blockers into the backfield to impact the play. Watch this third down conversion by the Chargers where Heyward gets a great long arm on rookie LT #70 Rashawn Slater, attempting to crash down as Ekeler attacks the gap. Heyward manages to cross Slater’s face but can’t keep his feet as he wraps up Ekeler who gets just enough to move the chains.

Heyward was often the target of the Chargers’ blocking schemes, committing double teams to him often throughout the game in pass protection as well in the running game in attempt to make sure he isn’t the one to wreck the game upfront. They did this on both of Ekeler’s TD runs on the night, as can be seen here on this score where both Slater and Feiler execute the combo block on Heyward, having Slater work up to the linebacker while Feiler manages to move Heyward off his spot to clear a hole that Ekeler shoots through for the score.

To Heyward’s credit, this TD run comes directly after the 6’5, 295lb defensive tackle as the age of 32 runs down Justin Herbert from behind on this run of 36 yards. Watch as Heyward shows incredible effort to turn around and take an angle to Herbert on the scramble, pursuing him down the field after multiple Pittsburgh defenders trip up each other in the defensive backfield, managing to chase him down after #34 Terrell Edmunds misses an open-field tackle, bringing down Herbert near the 10-yard line to prevent the score.

Heyward wasn’t done making splash plays after running down Herbert. His biggest play on the night came on the batted pass at the LOS late in the fourth quarter that #20 Cam Sutton manages to run underneath for the diving INT to set Pittsburgh up for the game-tying TD. Heyward recognizes the pass and gets his hands up in the passing lane, having the ball ricochet off his helmet as he leaps into the air, giving Sutton a chance to run underneath it for the turnover. At this point, Heyward currently leads Pittsburgh with seven PBUs on the season.

Cam Heyward is often not considered a household name when it comes to dominate, disruptive defensive players in the league compared to the likes of Aaron Donald, Chris Jones, etc. However, Heyward proved his worth to the Steelers defense Sunday night in a game where the defense was short-handed in a big way, missing several key names. Add that to the fact that Stephon Tuitt hasn’t played a snap this season and Tyson Alualu fractured his ankle the second game of the season, Heyward has had to have dominant performances each week to make up for the huge losses along Pittsburgh’s defensive front. Pro Football Focus currently has Heyward ranked with a 92.5 overall grade, ranking as the NFL’s second-best defender by their analytics.

The result may have been a loss, but those watching the game now understand how much Heyward means to the defense after seeing the unit without Watt or Fitzpatrick out there Sunday night. There is no denying Heyward’s impact on the game both against the run and as a pass rusher. Should Pittsburgh return their stars from the inactive list next week in a pivotal game against the Bengals as well as get Tuitt back at some point this season, we may get to see a defense like what we saw in 2020 compared to the makeshift unit that has been rolled out there for a majority of this season.

What are your thoughts on Cam Heyward’s performance against the Chargers Sunday night? Do you think his effort and play directly impacted the game and Pittsburgh’s chances to pull off the comeback? Do you think that Heyward is criminally underrated compared to the other “star” defensive linemen in the league? Please leave your thoughts in the comments section below and thanks again for reading!