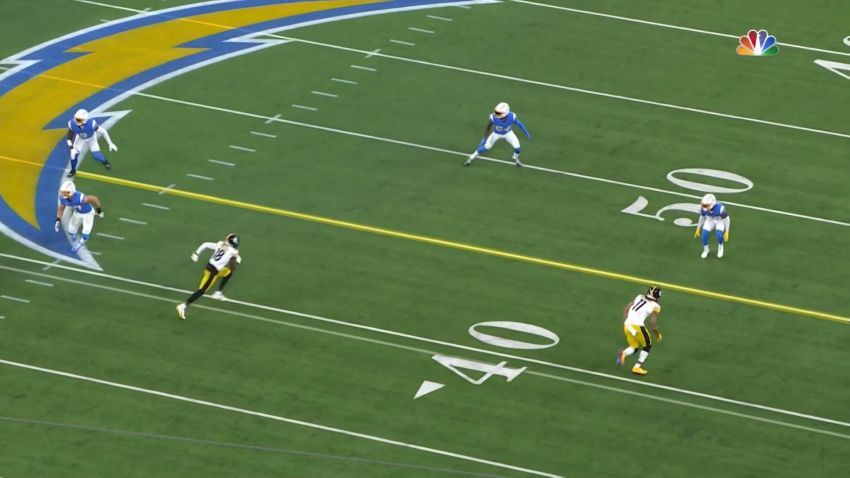 By the time the clocked read 0:00 at the end of the fourth quarter, there was frustration from the Pittsburgh Steelers—but that frustration was much different from what was felt at the start of the fourth quarter. They put up 27 of their 37 points on the night in those final 15 minutes, even taking the lead, before the Los Angeles Chargers got one back and scored the final points.

The numbers on offense ended up looking good in the end, particularly with their top two wide receivers. Diontae Johnson had a great game with some highlight-reel catches, finishing with seven receptions for 101 yards and a beautiful touchdown. Chase Claypool, back after missing a game with a toe injury, added 93 more yards on five catches. Even Ray-Ray McCloud had an important catch in the game.

“From a receiver standpoint, our group, we just put it on us, because we feel like we’re the best receiving corps in the league”, Johnson said after the game. “We show what we can do, and we just put it on us, and we continue to do that. We just came up short, and we’ve just got to watch film and get ready for next week. We’re gonna be fine”.

Johnson now has 59 receptions on the season through the Steelers’ first 10 games, having himself missed one, for 714 yards and four touchdowns. He is actually eighth in the AFC in receiving yards. Claypool is 19th, with 34 receptions for 526 yards. And Johnson credits their work with Ben Roethlisberger for their ability to perform.

“The way we make plays and the chemistry we’ve got”, is the reason he cited for his claim that the Steelers have the best receiving corps in the game. “Anybody can make plays with the ball in their hands. I feel like Ben trusts each and every one of us to be in the right spots all the time, and he’s been showing that. He showed that tonight. We’ve just got to keep the consistency going into the following week”.

Of course, they have gone most of the season now without JuJu Smith-Schuster, who suffered a shoulder injury that landed him on the Reserve/Injured List. Truth be told, nobody has really stepped up in his place at the position, between James Washington and McCloud. Instead, it’s been rookie tight end Pat Freiermuth, who scored his fourth touchdown in four games last night.

While they came up short tonight,  there is talent on display, and nights like this make you think about how high up the list you want to put Johnson’s name as being among the top receivers in the game. Claypool is still lacking some of that consistency, but the ability is clearly there to be a major impact on just about any play.

The thing is, they don’t really have anybody else that they can rely on at the position outside of those two. And it does show.