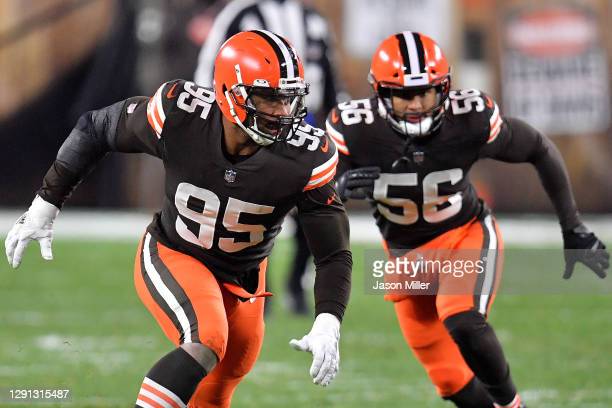 If you thought the day was bad for the Pittsburgh Steelers, don’t look at the Cleveland Browns’ box score. They were blown out, 45-7, by the New England Patriots, who, don’t look now, are now 6-4. It was such a blowout that they ended up allowing a touchdown pass thrown by Brian Hoyer before all was said and done.

And there wasn’t a whole lot that the Browns’ pass rush could do about it. While they did generate two sacks—including one by Myles Garrett, furthering his league lead—those were about the only two times that they pressured Patriots rookie quarterback Mac Jones all game.

New England pretty much executed at will, authoring 30 first downs on 62 plays run, averaging 7.3 yards per play, rushing for 184 and passing for 268. It only punted one time during the game, and did not turn the ball over. Only two possessions—the punt and the end of the game—did not end in points.

There are a lot of ways that you could communicate that idea, and Garrett probably chose one of the worst ways. He literally just told reporters that his coaches didn’t give himself and his defense any chance at beating their opponents. Imagine T.J. Watt or Cameron Heyward saying something like that.

It doesn’t matter whether or not it’s true; it’s not something you put out there. You can bitch out your coach in the locker room if you really want to, but, aside from the fact that nobody wants to hear a guy making $25 million a year complain, it in no way benefits your team for your star defender to throw his coaches under the bus.

And Garrett is supposed to be one of the leaders of the team. Accountability is a big part of leadership. When he was asked to clarify what he meant, he said, “We didn’t make adjustments, as in they kept on scoring, and we weren’t countering them. I mean we need to be better”.

He praised the Patriots’ play-calling and said, “We didn’t counter like we are supposed to. We didn’t stop the bleeding and they kept attacking where we were deficient”, adding that New England kept attacking the middle of the field in max protection and “We didn’t have answers”.