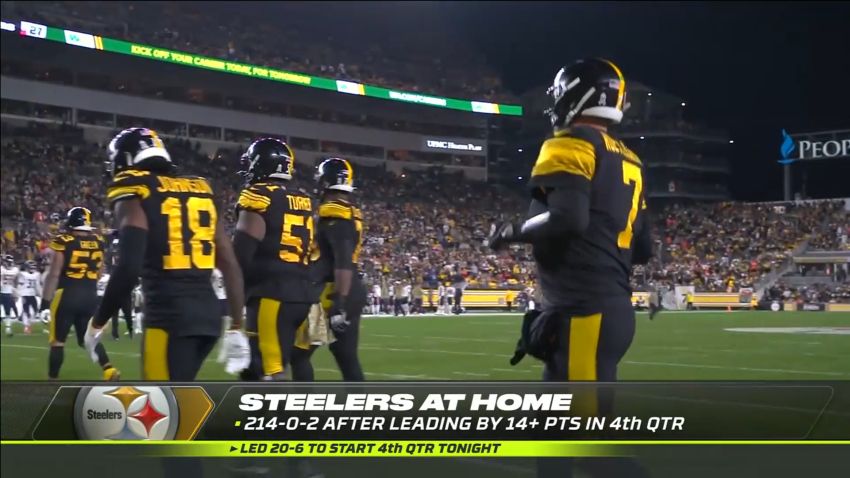 While you play the game for 60 minutes, football is a game of moments as much as it is about inches. Increasingly, NFL games are being decided by just one possession, often a field goal, and tonight’s victory for the Pittsburgh Steelers was no different, decided by two field-goal attempts in the final minute—one make, and one miss.

Pittsburgh’s, of course, was the one that made it, a 40-yarder from veteran kicker Chris Boswell for his third on the night, which left 26 seconds on the clock. The Chicago Bears had no timeouts left, and could only reach the Steelers’ 47-yard line, attempting a 65-yard field goal, 10 yards longer than kicker Cairo Santos’ career best.

The Steelers would never had had to call on Boswell for a third time, however, had they not given up a go-ahead touchdown just a minute after making it 26-20, Chicago marching down the field in just a little over a minute. There was only one problem, of course.

“On the sideline, I was just like, I felt like they gave me too much time”, quarterback Ben Roethlisberger said after the game when he was asked for his reaction on how his team was composed during that final Bears scoring drive.

“I was like we could go down [and score]. We’ve got, in my opinion, one of the best kickers in the league, so I wasn’t thinking about a touchdown. I was just thinking about getting us down to field goal range. It felt like everyone contributed on that drive”.

The Steelers took over with 1:46 to play, and moved down the field 52 yards in seven plays before stalling at the Bears’ 23-yard line after Roethlisberger actually carried the ball himself on a read-option play, coming up just short on 3rd and 2.

That is what prevented Pittsburgh from setting up a last-second field goal attempt, giving the Bears at least a prayer, even though they had used all of their timeouts. And they did pick up 23 yards in five plays in just 21 seconds. A batted pass at that point, however, meant that their only options, with two seconds on the clock, were a hail Mary or a desperation field goal.

You know what happened by now. Really, the Steelers would have been better off if the Bears took another 25 seconds off the clock on their scoring drive, at least with the way that the subsequent possession ended.

When all was said and done, it resulted in Roethlisberger commanded the 50th game-winning drive of his career, tying him with Tom Brady for the third-most all time, behind only Peyton Manning (54) and Drew Brees (53). The next closest among active players is Matt Ryan with 41, and then Matthew Stafford with 40.