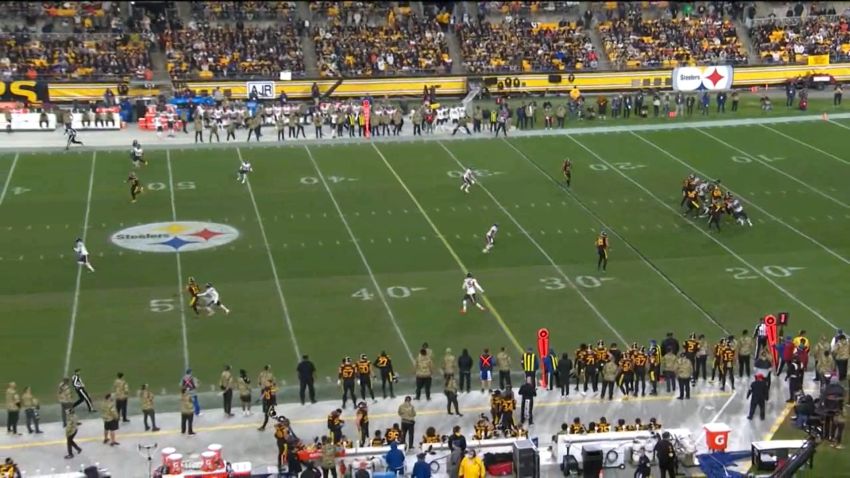 One of the stories of the Pittsburgh Steelers’ passing attack that we have been following this year was the deep ball, and in particular the middle of the field deep and intermediate passes. That is an area of the field that quarterback Ben Roethlisberger largely avoids, so it is significant when we get pass attempts in that area.

We did get one on Monday night against the Chicago Bears, and boy did it look like an ugly one during the live broadcast. It was a floater without a lot of velocity behind it down the middle of the field, and wide receiver James Washington had to come back to the ball just to dive for it.

Looks can be deceiving however, as anybody who watched the initial broadcast of the final field goal attempt of the game and thought that it bounced off the crossbar can attest. No, the pass itself indeed was exactly what it looked like. But it’s not because Roethlisberger’s arm is shot.

“The guy hit my hand, and so the ball kind of fluttered”, he told reporters on Wednesday when he was asked about that shaky pass, which did go for 42 yards. “I was like, ‘just please get there, James’. And he did. So that was good adjusting by him”.

People want to know if the Bears player hit Ben’s hand on the deep pass to Washington. This is the best I can get you right now. #Steelers pic.twitter.com/b76xZJ89NJ

It was Roethlisberger’s sixth-longest completion of the season, one of just seven passing plays of 40-plus yards, and one of six that actually came on a target down the field. That’s obviously significant for the 39-year-old quarterback. But it was perhaps even bigger for the receiver.

Asked if he thought that that big play could help get Washington going in the offense, Roethlisberger responded, “I hope so. He’s a guy that puts the hard work in. We ask him to play a lot of positions. Doesn’t ask questions, just plays hard. That’s what you love about a guy like that”.

With wide receiver JuJu Smith-Schuster out for the season, and now Chase Claypool expected to possibly be out for multiple games, this figures to be the best opportunity for Washington to contribute before he hits free agency next offseason.

On the year, Washington has caught 12 passes on 18 targets for 154 yards, though only four of those receptions have actually gone for first downs, and he has yet to score after recording a career-high five touchdowns last season on a career-low in snaps.

Behind Smith-Schuster, Claypool, and Diontae Johnson, Washington wasn’t expected to have a significant role this season, and there were even reports that the fourth-year veteran had requested a trade, though the Steelers neglected multiple opportunities to confirm or deny that.

He does have 225 snaps so far on the season, and is playing a slightly higher percentage of plays than he saw last year. Can he get more involved in the passing game during the second half of the season? Will this deep-pass comebacker help spark a larger role for Oklahoma State’s all-time leading receiver?