Week 8 of the NFL season is in the books, and I wanted to provide some data in anticipation to the playoffs and predictive success. With that in mind, here’s a visual of the ANY/A data point that will be used for offense (OANY/A) and defense (DANY/A) from Pro Football Reference: 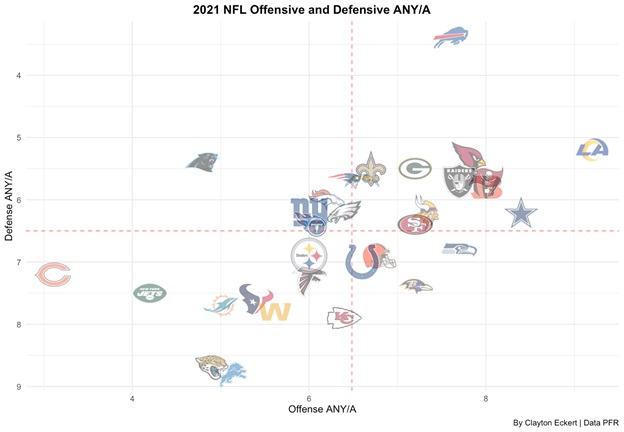 The teams on the top right are the current front runners to win the Super Bowl, and we can see from the visual how close (or far) teams Super Bowl hopes sit currently. Thanks to Dave Bryan’s prior research, no team has won the Super Bowl since 2000 with a negative ANY/A differential and a DANY/A number higher than 6.1. This is a slightly early look, but it will be interesting to see where teams stand today and monitor closely as the rest of the season unfolds. Here are two table views of the teams, first league-wide with met criteria in green, and the second table only teams who have met the Super Bowl criteria through 2021 so far:

This first table is an interesting view, looking at the teams that are highlighted in green we can see the current Super Bowl picture as we sit here today with strong historical data to back it up. The top four teams of the table are difficult to argue including the Bills, Rams, Cardinals, and Buccaneers followed by the Bengals, Raiders, Packers and Saints. The other three teams have a differential below 1, which has them toting the line of meeting all the criteria with additional sample size, the Chargers, Patriots, and especially the Broncos who barely met the criteria on both offense and defense. Also, it’s important to note that the Cowboys and Vikings missed the DANY/A by .1, so they could easily make a future list. The Panthers met the DANY/A data point, and the Steelers currently have a -.9 differential and a 6.9 DANY/A number. Pittsburgh will really need the DANY/A number to improve if there is any shot at making a future list and it will be interesting to see if the OANY/A number of six can trend upward.

Here’s the view with the teams that currently meet the criteria: 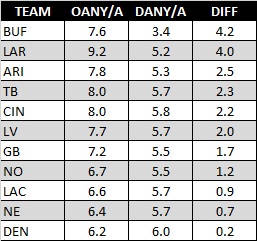 As I stated earlier, this is an early view and things will most likely change with a lot of football left to play. Revisiting the stats periodically the coming weeks will be both interesting and telling as we continue to get more sample and shed light on this year’s likely playoff and Super Bowl participants.