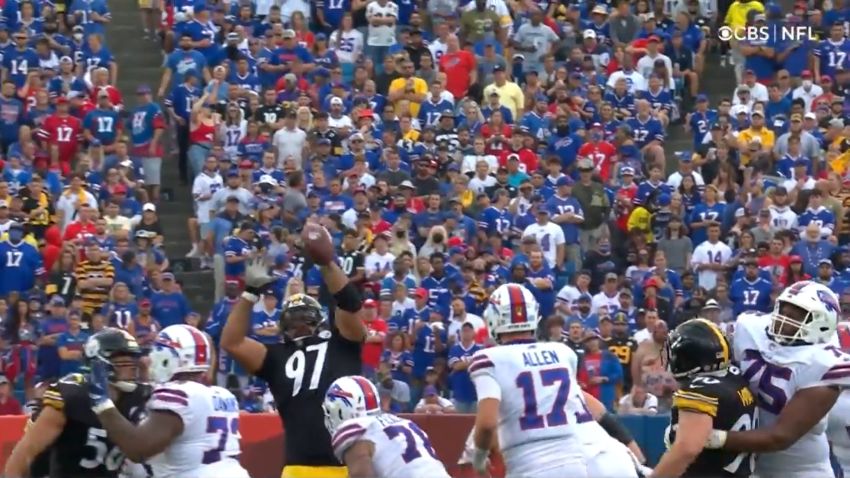 The Pittsburgh Steelers have placed big expectations on second-year outside linebacker Alex Highsmith all season. While he was not handed a starting job, necessarily, they did ultimately end up trading away potentially a starter-quality player in Melvin Ingram because they believed Highsmith deserved to start over him, and Ingram wanted more playing time.

While Highsmith is highly critical of his own performance, though, he knows better than to start comparing himself to others, particularly the guy across from him, T.J. Watt, who is on pace to record the most sacks in a single season in NFL history, with 11.5 in seven games. Right now, he’s trending to hit 26 by the end of the next eight games. Highsmith, in contrast, is on pace for 3.5.

“I just need to be the best person that I can be. That starts with doing my job, and ultimately, I know that if I do my job, I’m gonna make the plays”, he said when he was asked if playing across from such a dominant player like Watt puts added pressure on him to perform.

“I’m happy to see one of the best players in the league at what he does thriving like that. It’s awesome to be able to work with a guy like that, him and Cam [Heyward]. I just try to be the best that I can be every single day”, he added.

A third-round pick out of Charlotte last season, Highsmith operated as the number three edge defender behind Watt and Bud Dupree, who signed with the Tennessee Titans this offseason as an unrestricted free agent. While the Steelers drafted Quincy Roche in the sixth round, it wasn’t until they signed Ingram shortly before training camp that they really brought in any potential starting candidates.

Whether or not Ingram was ever in the running to hold a starting job became moot once Highsmith got on the field in training camp, however, because he was perhaps the Steelers’ best player all throughout the Summer.

Beginning the regular season with a groin injury that lingered for weeks and ultimately cost him a game, however, didn’t help him get off to a hot start in making good on that potential that he flashed during the exhibition phase.

On the season, the second-year edge defender has 28 tackles, including four tackles for loss. While he only has a sack and a half, he does have six quarterback hits, which is the same amount that he had during his entire rookie season.

Yet he knows as well as anybody that he has got to pick up the pace. He doesn’t need to be another Watt—though certainly nobody would complain about that—but it’s reasonable to have higher expectations for him that go beyond what he has had the opportunity to show thus far.