Today I wanted to look at how running games have done throughout the NFL in 2021, with different views including success rates, personnel groupings, and some data on Pittsburgh Steelers running back Najee Harris. Let’s jump right in. 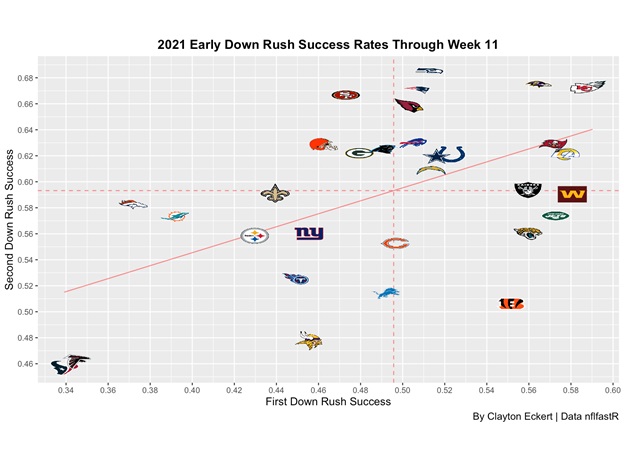 As we can see from the graph, the Pittsburgh Steelers are below the mean on both first and second down, especially on first down ranking 28th in the league at a 43% success rate. An improvement here would also set up more manageable situations across the board, down or play type, providing a more consistent offense. The first down success rate is an issue we at Steelers Depot have been pointing out through the season, and if there is any hope to come out with at least a .500 record through the end of the season this number likely will need to improve.

The Steelers have had more success on second down however, ranking 25th in the NFL with a 56% success rate. Landing above 50% is a great achievement for any running game, meaning that in the situation they are producing positive results more often than not to keep drives going and thus helping the team win. 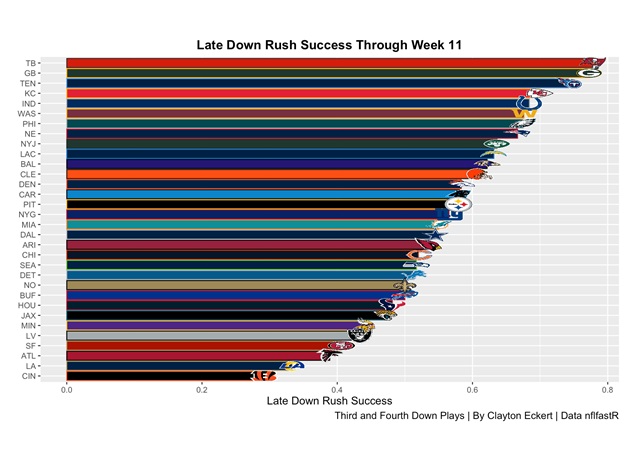 The Steelers also have fared well on late downs across the league, ranking 15th at a 58% success rate! This is especially impressive considering the importance of converting on these “money” downs, a necessity for team success and especially providing fresh sets of downs for the offense. Also important to note that the Steelers are 100% on fourth down alone on three plays, so an improvement on third down success would really help as we head into the tough schedule to end the season.

Now let’s sum it all up with the total success rates: 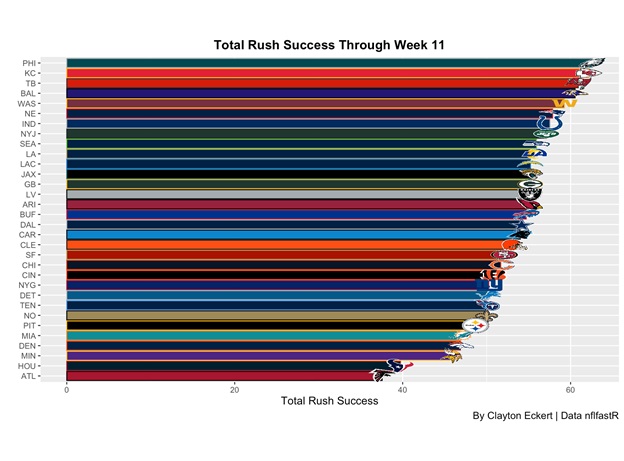 The Steelers rank 27th in the league with a total rush success of 48.7% and it will be very interesting to see how this number trends moving forward considering the Steelers are very close to the ideal total success rate of 50%. If Pittsburgh can improve their first down success rate, which is obviously the most frequently ran down and weighs into the total success rate the most, look for this accomplishment to be achieved in the coming weeks.

Now let’s look at some personnel data for running backs, starting with 11 personnel which the Steelers have ran at the third highest rate overall in the league at 73% and is the most common formation for all but two teams (1 RB – 1 TE – 3 – WR’s) with the following data points from Sports Info Solutions: 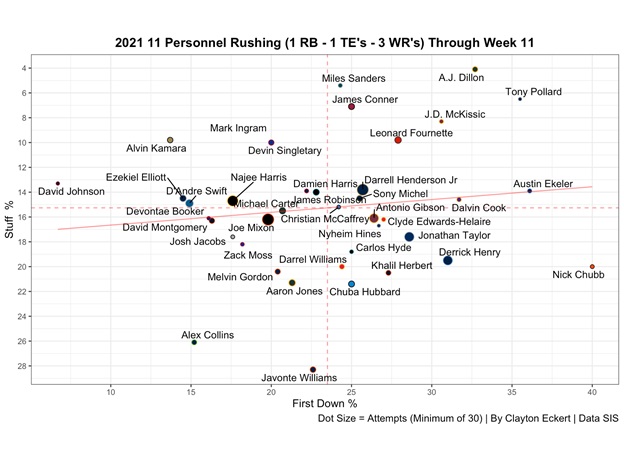 Steelers running back Najee Harris lands on the left middle of the graph, being just above the mean in stuff percentage of 14.7% ranking 18th out of 40 running backs on the graph. This highlights his ability to fight for extra yards even in less-than-ideal situations, limiting his no gain or loss of yard plays compared to other running backs. First down percentage is the room for improvement area, ranking 34th at 17.6% on his 102 attempts (third most) in 11 personnel. This will be very interesting to monitor through the coming weeks considering this is the most frequently used formation and would largely affect the rush success rates as well.

To close, let’s look at 12 personnel (1 RB – 2 TE’s – 2 WR’s) which the Steelers use the second most frequent at 19% along with the majority of the league with the same data points: 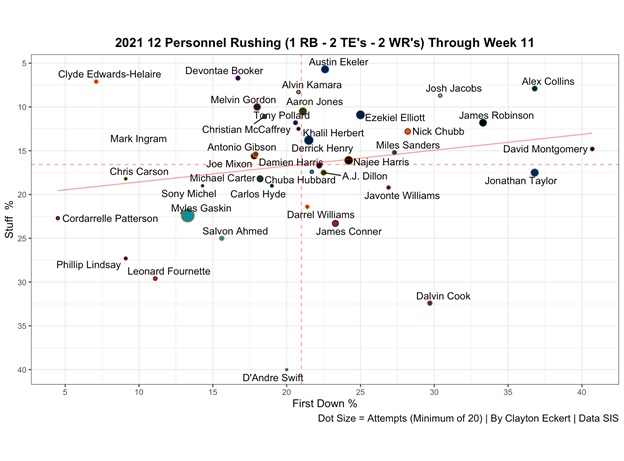 Harris lands on the middle right of the graph, highlighting better success in the formation with a higher first down percentage of 24.2% which ranks 11th on 62 attempts (fourth most). Harris is also slightly above the mean in stuff percentage of 16.1% ranking 21st out of the 39 running backs on the graph. This result is largely what I was expecting to see from watching film throughout the season, and really hope the Steelers can use heavier personnel more frequently to close the season.

If the Steelers first down success rate can trend closer to 50%, improve their success from 11 personnel, and an increase in 12 personnel/heavier formations I am optimistic the running game and the entire offense can reach their maximum potential.