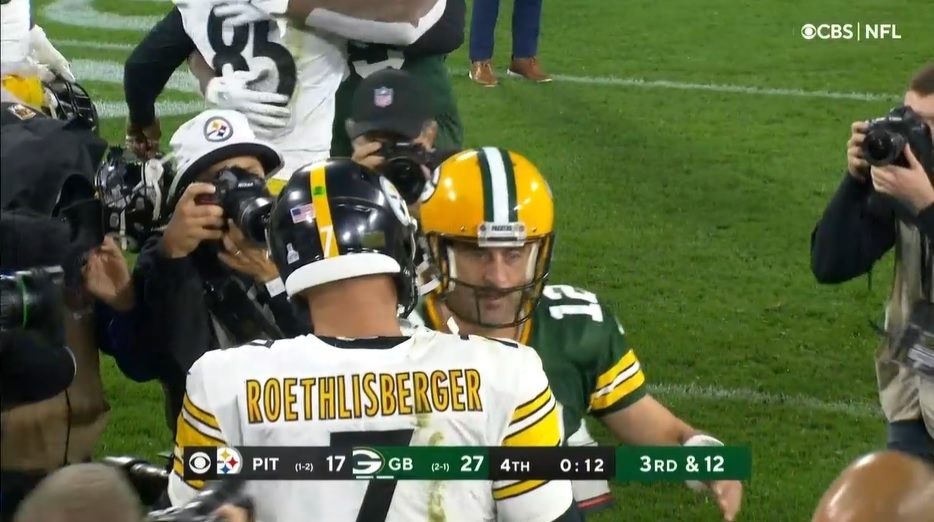 1. Sharpening the Maul – I have to start this off with something good so I thought Arthur Maulet made an impact today and is growing into his role. There were four plays that he made that helped the defense. The first was a slot blitz that he inadvertently ran into Davante Adams and disrupted his timing on the route.  It looked like he took that option away from Aaron Rodgers. The next play he knifed in and made a tackle for a loss. He later in the game got Rodgers to call a time out by indicating what direction the play was going before the snap. The last play was another tackler for a loss where he raced across the field.  He stood out in a quagmire of meh.

2. Was it in the Junk Folder? – After double digit games the Steelers finally got the memo that it’s okay to score touchdowns on the first drive of the game. A nicely thrown ball with a subtle push off by Diontae Johnson and voila the Steelers had a first quarter lead. Congratulation to Ben Roethlisberger on his 400th touchdown pass joining a small, elite group in the long history of the game.

3. Anchors Away – Pass blocking is hard to do. Facing off with big, fast, athletic men and trying to prevent them from getting where they want to go is often a thankless job even when they do it well. But I don’t think I’ve ever seen an NFL team not have one player along the offensive line with enough sand in the pants to drop anchor and stop a bull rush. Every single one of them at some point ended up in Ben’s lap and the ability to block power rushes has gone away.  I expected improvement over the first four weeks and I’m just not seeing it.

4. Ripping at the Seams – Juju Smith-Schuster was open twice up the seam on plays that would have been big gains if not scores if they could have completed the pass. Both throws fell harmlessly to the ground. The first looked like an overthrow from Roethlisberger on what would definitely been a TD.  The second one it could have been on either player.  Roethlisberger threw it inside while Smith-Schuster was still angling outside.  Regardless of fault, this passing scheme has been off the whole first quarter of the season and is hamstringing the team.

5. Wrong Selection – At this point in the season, and there is a long way to go, selecting Pat Freiermuth in the second round was the wrong player to pick. And it’s not about his play. I like him and his potential to be an impact player for a long time but if the offense isn’t going to utilize him, it was the wrong pick.  Second round picks are expected to play a role almost right away and to give him just eleven targets in through 4 games is ridiculous. They need to game plan to get him the ball.

6. Receivers Revolt – I complained last week about the receivers not being able to get open and they responded this week. There was actually space between the defenders and the receivers often in this game.  I’ve already complained about the seam routes and I’ve previously complained about the accuracy but to continually throw the ball short of the line to gain and to expect the player catching the ball to break multiple tackles is absurd.  That is on Matt Canada for the call and Roethlisberger for repeatedly throwing there.  The receivers need to walk into the coach’s office this week and quote Jerry McGuire, “Help me help you.”

7. Call the Embassy – Canada was quoted this week saying, “We’re gonna stick with what we’re doing” in reference to the struggles of the offense. We need to have him deported if that is the case.  The role of the offensive coordinator is to put the team in position to make plays and move the ball down the field.  If what you’re doing isn’t working, you make adjustments. If you don’t you’re not a good coordinator. Despite the struggles of the offensive line he and this team need to make the adjustments to find what will work. This anemic offense is the same as last year so there has been plenty of time to address it.

8. 20 Watt Bulb – There is a light shining on this defense. With two sacks in this game and despite missing the previous game T.J. Watt is off to an impressive start. He now has  5 sacks in three games this season or 1.67 per game.  Which puts him on pace to not only surpass the 20 sack threshold but also for about 26 sacks this year which would top the numbers of 22.5 held by Michael Strahan and the unofficial 23 by Al Baker.  Now we obviously can’t extrapolate the numbers out like that but it will be fun to keep an eye on where he stands at midseason to see if he has a chance.

9. History Repeats and Adds Insults – It was fourth down and once again the quarterback through the ball behind the line of scrimmage forcing the pass catcher to break a bunch of tackles to make a play. Despite the effort of Najee Harris the play failed. But to add insult to our injured psyche of having to watch that again, two receivers collided on their routes on the play.  When they showed the replay from behind the offense Smith-Schuster and Eric Ebron collided on their routes forcing Ebron to the ground.  Little mistakes are far too common with this team and they can’t afford to continue the undisciplined play.

10. Do You See Any? – After last week’s game I decided to add to my pain and look at the rest of the Steelers schedule and there is big problem. Where are the wins?  Normally you can look down a schedule and find games you expect your team to win.  For this team it is hard to realistically predict wins.  Last week I thought Chicago could be a game they could win. This week I’m not sure.  I hope I’m wrong but I don’t see many if any truly winnable games at this point.