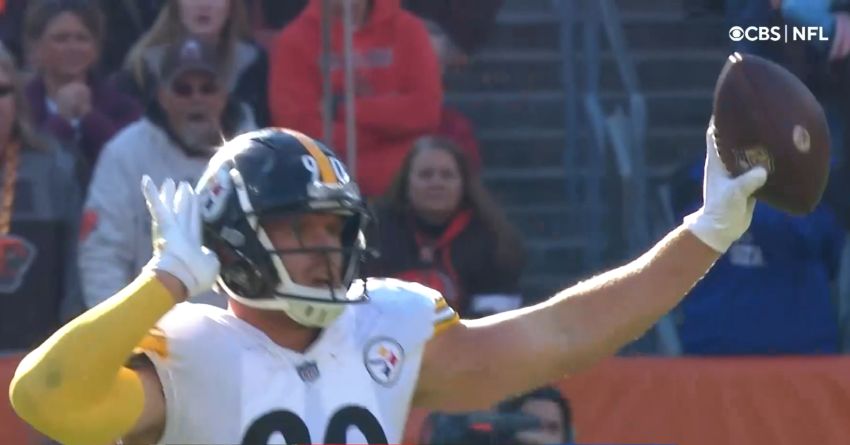 Takeaways have been hard to come by for the Pittsburgh Steelers so far this season. They are lucky to get one per game. But it’s often enough that they’re big ones, and it’s no surprise that T.J. Watt often has his hand in them. On the season, he has three forced fumbles, and he recovered his first fumble of the season today, which helped keep a driving Cleveland Browns team from potentially taking back a late lead.

With just six minutes to play, the Browns’ Jarvis Landry had just secured a first down just outside the red zone trailing by five when linebacker Joe Schobert was able to punch out the ball. That Watt was able to recover the ball is key, because their forced fumble to recovery ratio has been low this year.

“We’re always looking for splash any way we possibly can”, Watt said after the game. “Whenever we can do that for our offense and get the ball back in their hands, it’s huge. I’ve seen Joe [has] been doing that for years, especially when he was playing for Cleveland. Glad to have him on our side. That’s his play; to fall on the football isn’t really a big play for me”.

That’s easy to say for him, but like I said, it’s still significant for the Steelers. It was their 10th forced fumble on the season, but only their fourth defensive recovery (and the second by Watt, who now has six recoveries in his career). And it’s all a credit to doing it the right way.

“Great play by Schobert. Just steeped in fundamentals”, head coach Mike Tomlin said about the forced fumble play. “He did a great job ball-searching, linebacker-vs-wide-receiver, and we fought and fought and came out of there with it. Obviously, a big, big-time play”.

With that fumble recovery, the Steelers now have six takeaways on the season through seven games, which is among the fewest in the NFL. They have four fumble recoveries (the other two by Cameron Heyward and Devin Bush, both of those having been forced by Watt), and two interceptions, by Terrell Edmunds and James Pierre.

Considering the sorts of point totals the offense has been putting up this year, the defense is probably going to have to pick up the turnover pace. The Steelers are 0-3 when they lose the turnover battle this season, and 4-0 when they either win it or tie.