When it comes to sacking the quarterback in today’s NFL, few do it better than Pittsburgh Steelers’ star outside linebacker T.J. Watt.

Through six games, Watt has recorded 7.0 sacks, helping win the game in Week 6 on Sunday Night Football against the Seattle Seahawks at Heinz Field with a strip sack of Geno Smith in overtime, setting up Chris Boswell’s game-winning field goal.

While Watt has 7.0 sacks and sits in second place in the NFL through six weeks behind Cleveland’s Myles Garrett (9.5 sacks), not all sacks are created equally. That’s where Trench Warfare’s Brandon Thorn steps in, providing a true sack score for each player. TSR is used to identify which rushers utilized the highest level of skill against the most difficult set of circumstances to record a sack.

According to Thorn’s scoring, Watt sits tied for second in the NFL with Arizona’s Chandler Jones and Chicago’s Robert Quinn at a TSR of 5.5, which falls just one point behind Garrett in Cleveland. 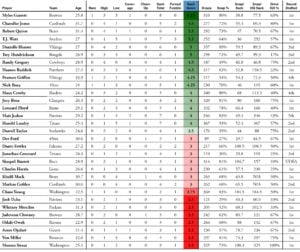 Having played just 252 snaps on the season, it shouldn’t come as a surprise that Watt is so disruptive and overly dominant at the position, considering he holds down the title of the league’s highest paid defensive player and is making a real case for the NFL’s Defensive Player of the Year  award for the second straight season.

It’s worth noting that Watt is the Steelers’ lone representative on the TSR scoring, as no other Steelers’ pass rusher qualifies for the grading metric after six weeks of action. That should change as the Steelers complete more and more games, but it shows just how much of a one-man show Watt has been at getting after the passer early in the 2021 season.