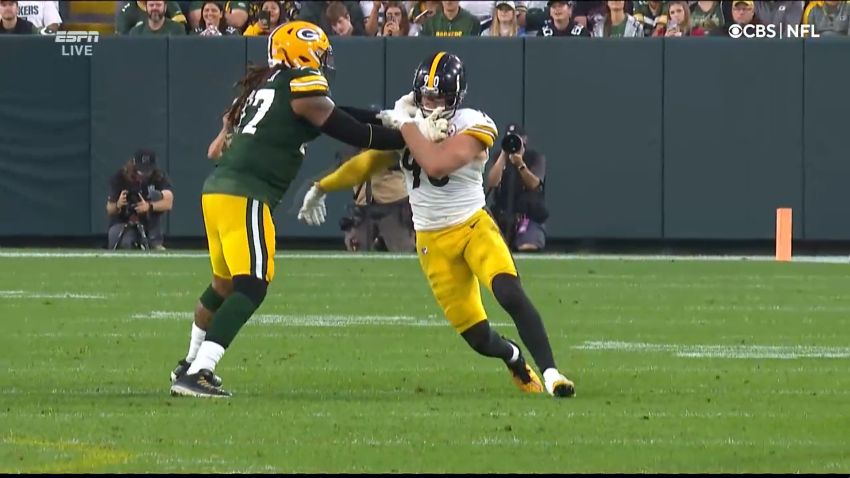 The Pittsburgh Steelers defense got a significant boost with the return of their two starting outside linebackers, T.J. Watt and Alex Highsmith, both of whom had to sit out last week’s game with groin injuries. Watt seemed to be close to playing last week, so it wasn’t a surprise that he was ready to go this evening. But he also wasn’t clearly the same player from the first game and a half.

“I felt pretty good. Good enough to play”, the fifth-year veteran said after the game in assessing his performance in his first action since the first half of week two. He was asked again about the state of his health, and would only offer, in a deeply loaded answer, “I was good enough to play”.

T.J. Watt speaks to the media following the game against the Packers. pic.twitter.com/MubnkrNXxE

Needless to say, Watt is not at 100 percent. I don’t know how to put a percentage on where he is, and it’s not as though he played poorly, but watching him, you could see a player who is capable of doing more when he is healthier.

Of course, you don’t get a choice. If you are, as he says, ‘good enough to play’, and you’re a player like Watt, then you go out there and play, and give whatever you have. He did finish the game with two sacks, albeit one that probably should have been a penalty for tripping, if we’re being honest. He had four tackles, two tackles for loss, two quarterback hits, and a fumble recovery—and a roughing the passer penalty.

It is unfortunate that both of the Steelers’ starting outside linebackers suffered groin injuries early on in the season, ailments that can linger for quite a while and affect a player’s performance throughout the season. They have tried to be smart with it, which included holding both of them back last week, but they’re likely both feeling it.

The Steelers do have Melvin Ingram, who has logged more snaps than anybody else at the outside linebacker position for the defense so far this season, and he’s done pretty well. He only registered one tackle during the game, but he had three hits on the quarterback, and even came close to an interception.

As a defense, the Steelers were able to hit Aaron Rodgers eight times, but he still completed 20 of 36 pass attempts for 248 yards, with two touchdowns and zero interceptions. They did blow a chance or two, with Minkah Fitzpatrick having dropped one potential pick.