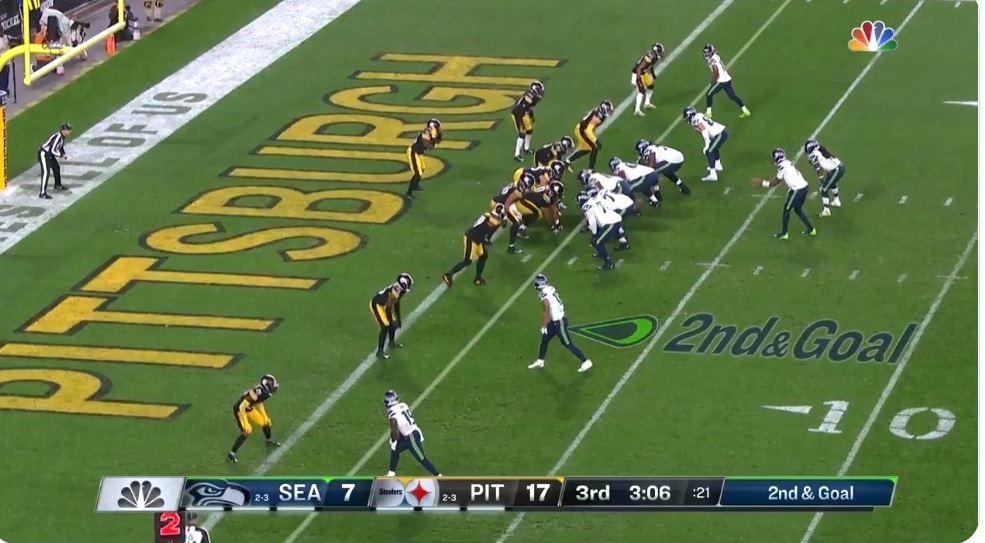 Winners and losers from the Pittsburgh Steelers 23-20 overtime win against the Seattle Seahawks Sunday night.

Eric Ebron – Blocking still isn’t great, never will be, but he found the end zone tonight on a nifty jet run on the goal line for his third career rushing score. Also had a tough third down grab in traffic that set up the Steelers first touchdown of the game.

Red Zone Offense – Steelers scored on their first two red zone trips tonight, running up a 14-0 lead. That made for five straight red zone touchdowns over the last three games before settling for a short, second half field goal. But Pittsburgh’s doing well in that type of situational football. Spread the field out on Najee Harris’ touchdown, bunched things up on Ebron’s score.

Tre Norwood – Norwood with two key plays on third down in the first half. A great open field tackle on D.K. Metcalf over the middle and a breakup later in the half. Had a third down tackle, one of the few who could do it tonight, following Ben Roethlisberger’s fourth quarter fumble. He’s carving out a real home as the team’s dime defender and the Steelers clearly are high on the kid.

Alex Highsmith – Colorful night for him, a welcomed sight after being slowed by a groin injury all season. Notched his first 1.5 sacks on the season with several QBs hits. The first sack dipping under LT Duane Brown was especially nice and shades of what we saw this summer with him.

Pat Freiermuth – Roethlisberger basically promised he would get Freiermuth more involved in the offense this week. And he did. Freiermuth set a career high number of receptions tonight in his young NFL career. Sure-handed, a good route runner versus man, and a great feel against zone coverage, he may be the biggest benefactor of JuJu Smith-Schuster’s season-ending injury.

Chris Boswell – Clutch 52-yard kick to give the Steelers a 20-17 lead. He’s 4/4 on field goals from 50+ yards since last season and had a 51-yarder that was good get wiped out by a Denver penalty last week. He capped it off with the game-winning 37 yard boot.

What a great kicker the Steelers have.

Najee Harris – Harris’ status weren’t as gaudy as last week but the running lanes weren’t nearly as good either. He ran hard, churned out yards after contact, took care of the football, and the YAC he got on the 3rd down catch to set up Boswell’s FG was big. He also caught his second touchdown of the season.

Cam Heyward – His second sack of the season and the defense’s leading tackle. Another good performance by him, even if the run game nosedived in the second half.

TJ Watt – Big-time game for the man who should be the DPOY frontrunner. Watt came on strong late in the game but played well throughout with two pass deflections and tackles for loss. In OT, he sacked Geno Smith twice, the latter popping the ball out, recovered by Devin Bush that set up the Steelers’ game-winning field goal.

Tackling – About as bad as you’ll see it in a game tonight. It’s a short list in terms of the number of listed losers but you can point the finger at a lot of guys tonight. Don’t envy Josh Carney’s missed tackles report. He might still be counting them through the bye week.

Whether it was Terrell Edmunds, Cam Sutton, Devin Bush, Minkah Fitzpatrick, and others, they were kills. A 3rd and 8 conversion where three Steelers were in position to make the tackle and Gerald Everett’s long catch and run were two of the most notable moments.

Devin Bush/Terrell Edmunds – No one defender should be safe or absolved from the second half mess. But these two, watching it live, were the worst offenders. They probably missed about the same amount of tackles and had poor/non-existent run fits. Edmunds was late with his eyes to fill his gap on Alex Collins’ first rushing touchdown while Bush was running past plays.

Run Defense – Which goes hand in hand with the poor tackling. But fits were poor too. After holding Seattle to just 18 first-half rushing yards, Alex Collins led the charge as the Seahawks ran for over 120 yards in the second half. Repeated successful runs, Seattle had 19 third-quarter plays and just one third down. Which they converted on third and seven by running the ball for a 27-yard gain. Ugly. Really let Seattle back into the game.

Chase Claypool – Such a boom/bust player. When it’s good, it’s good. When it’s bad, it looks like tonight. Claypool was targeted a lot (seven) but didn’t do much with the chances (two catches, 7 yards). His OPI late in the fourth quarter was costly and Claypool didn’t even have the awareness to get his feet inbounds had he gotten away with it.

End Of Regulation Defense – Can’t understand a team giving up sideline throws when the opposing offense is running out of time with just one/zero timeouts. The out route complete to Metcalf was just unacceptable. 18 seconds, no timeouts, and Pittsburgh gives that up. Craziness followed after it, Metcalf fumbled trying to get out of bounds (great punch out by James Pierre) but that’s still just unacceptable.