Today I wanted to look at some data for the season, discuss takeaways for the Pittsburgh Steelers week six matchup against the Seattle Seahawks, and pose some questions for you the readers.

First, let’s look at quarterbacks for the 2021 season so far using the following data points from Next Gen Stats: 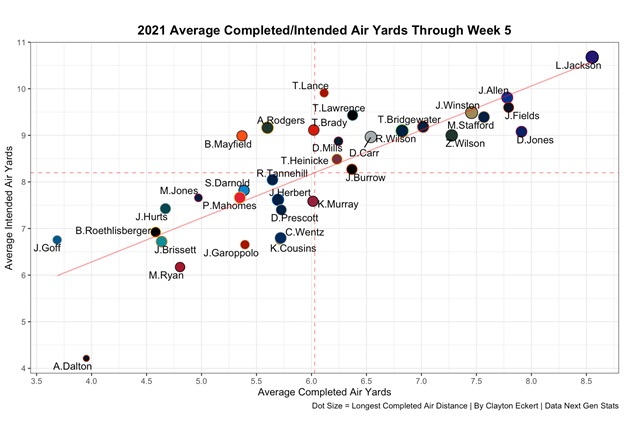 Steelers quarterback Ben Roethlisberger improved his average in both data points coming off of his strong Week 5 performance. His average through week five in intended air yards ranks 27th out of the 34 quarterbacks on the graph, compared to ranking 32nd through Week 4. This highlights an improvement many have been hoping for, along with the rest of the offense stepping up to allow Roethlisberger to play with more quality on fewer attempts. He still ranks low in the average completed air yards category, but his yardage is trending in the right direction.

Seattle quarterback Russell Wilson is above the mean in both categories but was injured in their game against the Los Angeles Rams and will not play against the Steelers. This is obviously a huge loss for the Seahawks and hopefully Pittsburgh can take advantage and come away with the win, considering the schedule will not get any easier after their bye week in Week 7. Quarterback Geno Smith will get the start for the Seahawks, and he did not make the graph above due to the lack of snaps so far in 2021. Looking at Week 5 only (when he relieved Wilson after injury) Smith had the second longest time to throw number, and if that is similar against the Steelers defense we could see a more effective pass rush in this game. I also noticed his average intended air yards were high, but not the case with his average completed air yards. This gave Smith the lowest completed/intended air yards differential of Week 5 and could be a big factor in who can win this battle between Roethlisberger and Smith.

How do you think the quarterbacks will perform in this game? Do you think the Steelers defense will be able to capitalize playing against the Seattle offense without Wilson? What are your favorite results league-wide? 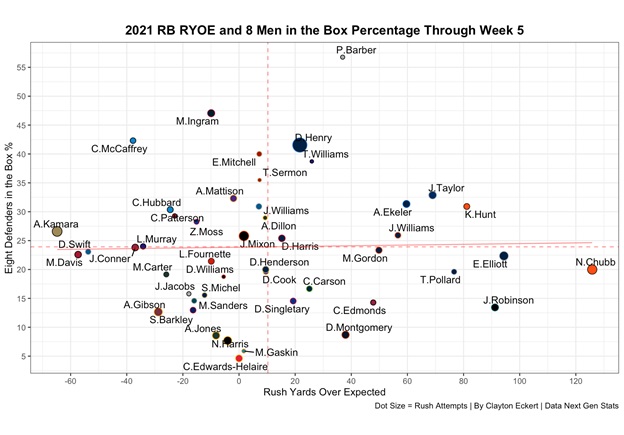 Steelers running back Najee Harris improved his rush yards over expected on the season by ranking fourth in his awesome performance last week. If he continues to see a low number of defenders in the box and the offensive line continues their positive trend, I hope and expect to see him above the mean in rushing yards over expected very soon. Another important factor that I hope can continue is scoring on early drives and successful first down runs to allow the running game to be a factor throughout the contest as we saw in Week 5.

Seahawks running back Chris Carson missed Week 5 due to injury and was also ruled out for the game against the Steelers on Sunday. Carson is above the mean in rushing yards over expected in 2021 and has faced more defenders in the box than Harris. This highlights another injury loss for Seattle, and we will likely see running back Alex Collins the most considering he led the team with 15 carries in Carson’s absence in Week 5. It will be very interesting to see how the Seattle running game performs considering they will likely want to run more without Wilson.

What type of performance do you see Harris having against the Seahawks defense? How do you think the Steelers run defense will fare in this game? What are your favorite results league-wide?

Lastly, I wanted to look at the top wide receivers for the Steelers and the Seahawks for the season, and see how they have done with the following data points from Next Gen Stats: 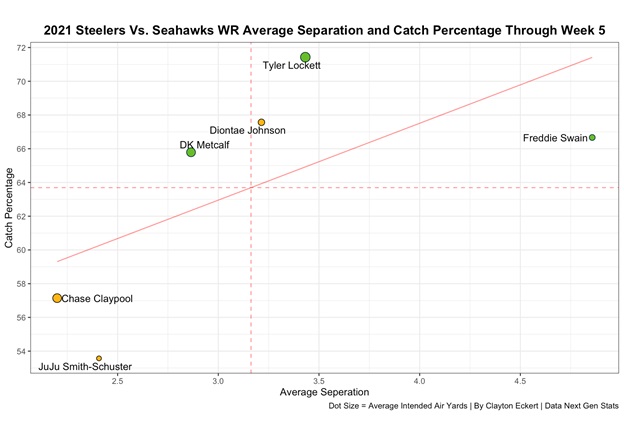 Seahawks wide receiver Tyler Lockett has the highest catch percentage and average intended air yards out of all the receivers on the graph. While it is important to remember that Wilson will not play and has a special connection with Lockett that has a lot to do with this success, it will be very important for the Steelers defense to be on point with their communication and coverages against Lockett and Seattle wide receiver D.K. Metcalf. While Metcalf is lower in the separation category, he is great in contested catch situations and leads the graph with five touchdowns and second in intended air yards to Lockett. Seahawks wide receiver Freddie Swain leads the group in separation, but on the lowest number of targets and catches on the graph. It will be very interesting to see what the Seahawks wide receivers numbers and performance look against the Steelers defense Sunday night with Smith at quarterback.

Steelers wide receiver JuJu Smith-Schuster will be out for the rest of the year due to his injury in Week 5. Hopefully we see guys like wide receiver James Washington and tight end Pat Freiermuth step into increased roles in Smith-Schuster’s absence, and it will be very interesting to see what the Steelers receiver numbers look like in the coming weeks. Steelers wide receiver Diontae Johnson is having a good season so far, ranking second in catch percentage on the graph and leading the Steelers in separation as expected. He is also capitalizing on his deep target opportunities while at a lower rate than Steelers wide receiver Chase Claypool, who saw an improved connection with Roethlisberger in Week 5. Claypool’s overall catch percentage is still low due to the connection issues with Roethlisberger earlier in the season and is still struggling to create separation overall, highlighted by ranking last on the graph.