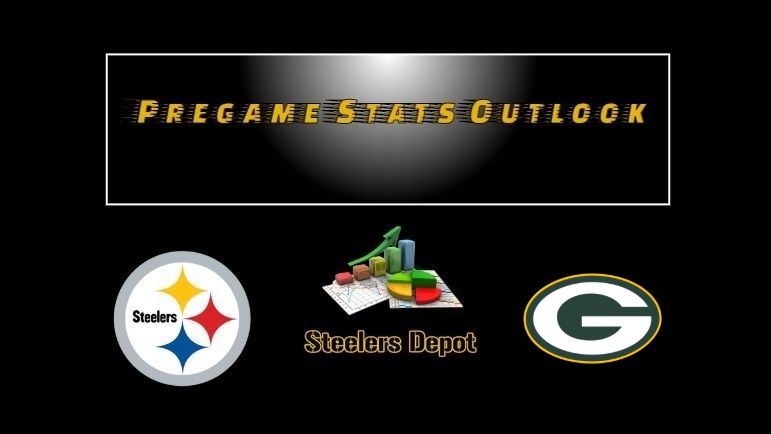 Today I wanted to look at some data for the season, discuss some takeaways for the Pittsburgh Steelers Week 4 matchup against the Green Bay Packers, and pose some questions for you the readers.

First, I wanted to look at first down and ten situations so far in 2021 by team using the following data points: 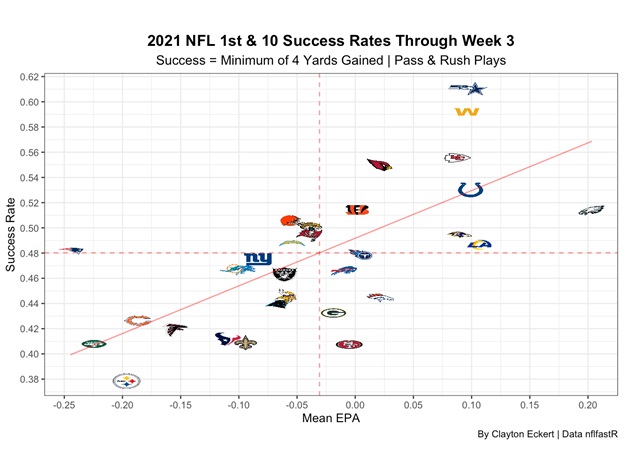 As we can see on the graph, the Pittsburgh Steelers have had the worst success rate in the NFL on first down and ten in the 2021 season so far. This highlights a big issue with the Steelers offense thus far, often leading to poor situations on second and third down and leading to failed drives. Pittsburgh will need a better game plan and execution in these situations to allow success in what they do on all downs against the Packers and moving forward.

Now let’s look at a table form of the graph for more context: 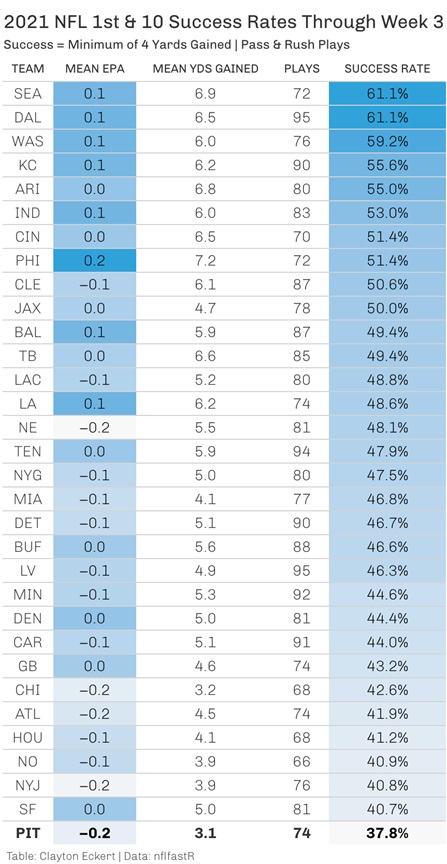 Seeing the Steelers success rate percentage is very telling, giving context to why many of Pittsburgh’s offensive drives have sputtered. The Steelers being nearly three percentage points lower than San Francisco also highlights the Steelers aren’t close to the rest of the teams, considering the five teams ranked higher are roughly within a percentage point from each other and the large difference from some of the top teams as well. Do you think Pittsburgh can improve their first and ten success rate against the Packers and moving forward?

Another point of emphasis for the Steelers offense I am hoping for is a stronger start in the first half. For context, let’s look at success rates and expected points added (EPA) through 2021 so far: 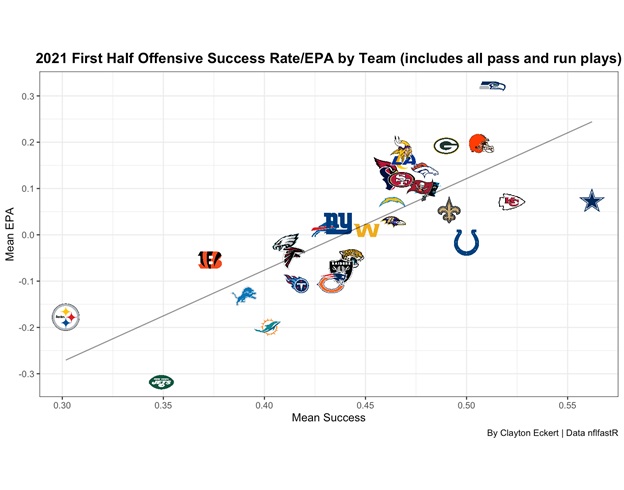 The Steelers jump out on the bottom left of the graph and have another dead last ranking in an offensive success data point. Pairing this with the lack of success on first down really puts a spotlight on the large scope areas the Steelers offense need to improve in this game and moving forward for the team to be successful.

Green Bay has exceled overall as a first half offense, ranking in the top ten in both categories. This will definitely be a challenge for the Steelers defense facing excellent players like wide receiver Davante Adams, running back Aaron Jones, and of course quarterback Aaron Rodgers. How do you think the Steelers defense will perform in this game?

Next, I wanted to look at air yards to the sticks and which quarterbacks have a positive average from Next Gen Stats: 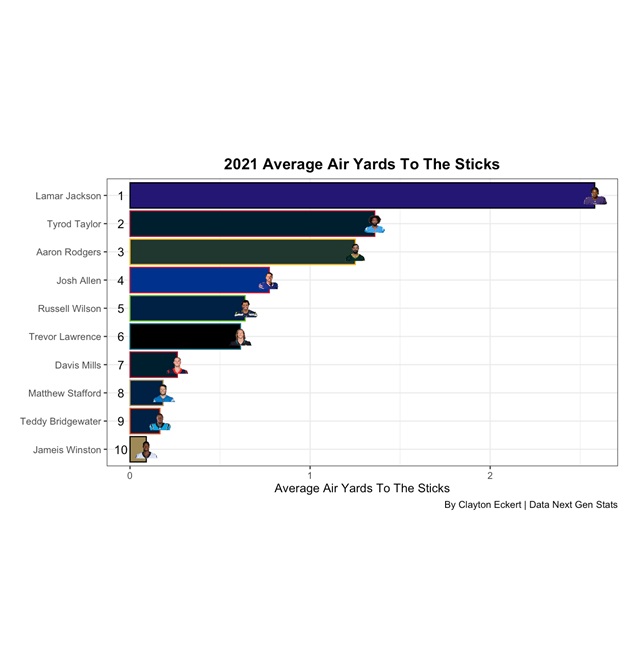 Rodgers ranks third in the league in this category, which puts into context the types of throws he makes in comparison to the rest of the quarterbacks league wide. Steelers quarterback Ben Roethlisberger has a -2.2 number which ranks 27th of 35 quarterbacks. When Pittsburgh and Green Bay face off for their week four matchup on Sunday, this will likely be a big factor in the offensive success (or lack thereof) for both teams. Will the Steelers offense be able to connect down the field more against Green Bay? Will the Steelers defense be able to defend the sticks and big plays against the Packers offense?

Now let’s look at running backs and which players have the quickest time to the line of scrimmage so far in 2021: 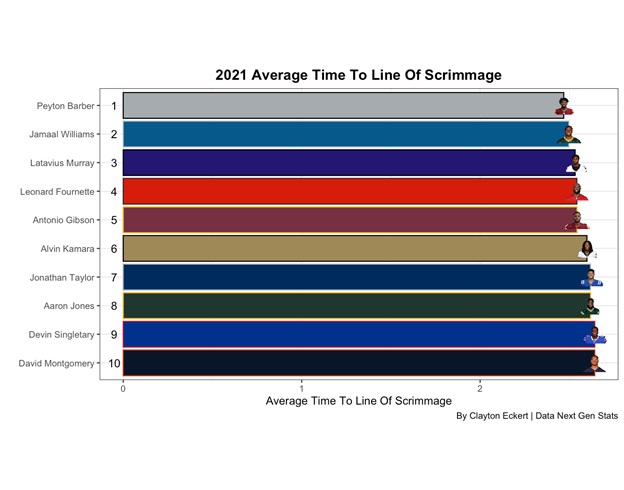 We can see that Packers running back Aaron Jones lands in the top ten so far in 2021, highlighting the need for the Steelers defense to be ready for Jones in their run gaps and making sound tackles. Having linebackers T.J. Watt and Alex Highsmith back healthy will definitely help compared to the banged-up unit that played in week three, and really looking for a stronger performance overall on defense to help the struggling Steelers offense. How do you think the Steelers defense will fare against the Packers running game?

Najee Harris ranks 37th out of 44 players in this data point, highlighting the issues of the offensive line and Harris needing to be more decisive and reading the holes that open up when they are there. The Steelers will be without tackle Chukwuma Okorafor per the Friday injury report, so we could see offensive lineman Zach Banner if he is activated to the roster. If not, Joe Haeg will likely fill in again as he did when Okorafor left during the Steelers week three game. How do you think Najee Harris will perform in the running game?

Lastly, I wanted to look at the top wide receivers for the Steelers and Packers for the season, and see how they have done with the following data points: 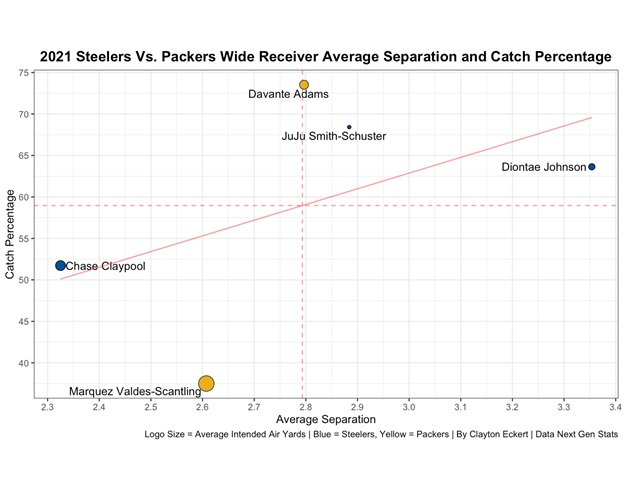 Packers wide receiver Davante Adams has the highest catch percentage of the group, and being tied for the league lead in receptions highlights how important it is for the Steelers defense to do their best limiting Adams and providing pressure on Aaron Rodgers. Marquez Valdes-Scantling is the other Packers wide receiver that made the graph, but he was ruled out for this game on Green Bay’s Friday injury report.

The Steelers got more good news on the Friday injury report, with wide receivers Diontae Johnson and JuJu Smith Schuster practicing fully which was extremely encouraging. Johnson is the leader on the graph in separation and Pittsburgh really missed this skillset last week against the Bengals. Smith-Schuster leads the Steelers in catch percentage but it would be encouraging to see his intended air yards increase, considering he is tied for the third lowest rank in the data point at a 3.8 average intended air yards number. Steelers wide receiver Chase Claypool was listed as questionable for the game on Friday’s injury report and will really be looking for a higher catch percentage compared to his first three weeks of the season if he plays.

Penalties and turnovers really hurt the Steelers in week three, do you think Pittsburgh will be able to clean those aspects of the game up or will it continue to be an issue? How do you think T.J. Watt will play coming off his injury and in his return to Wisconsin where he grew up and played in college? Who do you think will win the game on Sunday?