Today I wanted to look at some data for the season, discuss takeaways for the Pittsburgh Steelers week eight matchup against the Cleveland Browns, and pose some questions for you the readers.

First, let’s look at offenses and defenses by team so far in 2021 using rush and pass plays and the following data point: 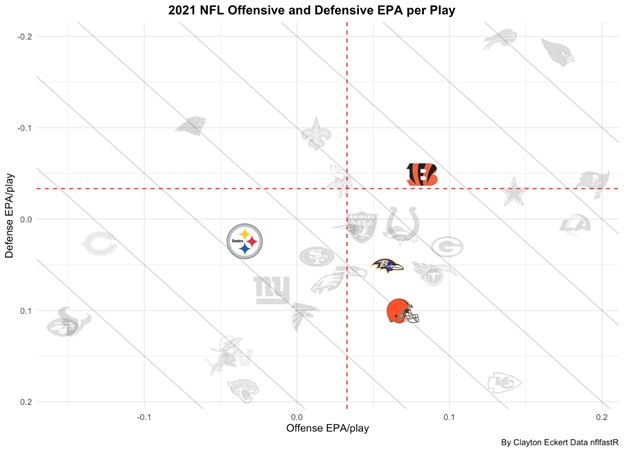 With the AFC North logos colored, we can see that the Steelers are the only team below the mean in the division on offense and are also below the mean league wide on both offense and defense. The Browns are second in the division in offensive EPA but last in defensive EPA. This is very interesting considering Cleveland has been good in the run game on both sides of the ball in 2021 which provides a great challenge for Najee Harris and the Steelers offense, and also highlights the Steelers success in the passing game being a key factor in the outcome of this game.

Speaking of the running game, let’s look at running backs with the following data point from Next Gen Stats: 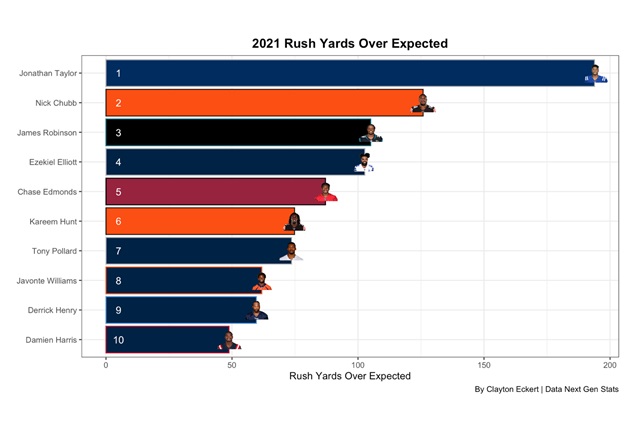 One of the common themes we hear regarding the Browns is how strong their run game is on offense, and the above graph helps illustrate how well both Nick Chubb and Kareem Hunt have performed when healthy. Hunt was placed on injured reserve and Chubb missed the last two games (but will likely play this Sunday), which gave backup D’Ernest Johnson the start and had a stellar game and the top ranked rushing yards over expected for week seven! The running backs definitely deserve their props, but the Browns offensive line is another strong suit for the team providing many ideal opportunities.

How do you think the running backs will fare on Sunday? 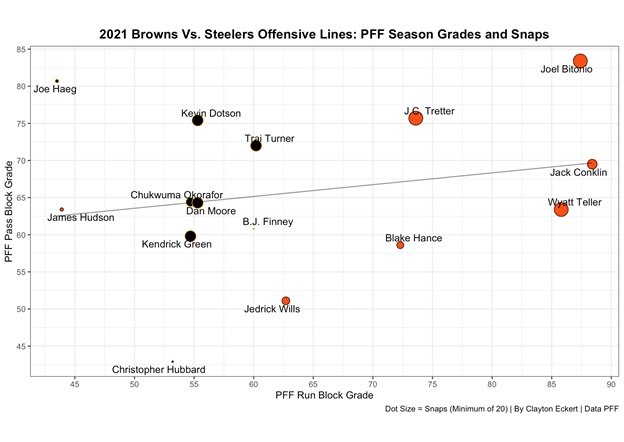 Right away we can see that most of the Browns offensive line grades out better in the running game than the Steelers, except for tackle James Hudson and former Steeler Chris Hubbard but both are backups for Cleveland. We can also see guard Joel Bitonio and center J.C. Tretter have stronger passing grades of 75+ along with Steelers tackle Joe Haeg (on a low snap count) and guard Kevin Dotson. Guard Trai Turner isn’t far behind with a 70+ pass block grade and found it interesting that four Steelers starters are hovering around a 55 run blocking grade so far in 2021.

How do you think the offensive lines will perform in the matchup?

Next let’s look at quarterbacks with the following data points: 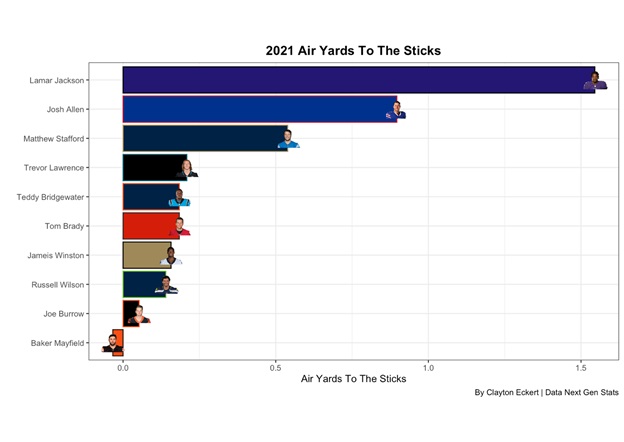 Looking at the top ten in this data point, we can see who has been pushing the ball to first down yardage more often. Also, all three of the Steelers division opponents made the list with Browns quarterback Baker Mayfield being the only player in the top ten with an average short of the sticks. Mayfield will reportedly start after missing last game due to injury and it will be very interesting to see how he plays as he is definitely not 100%. Steelers quarterback Ben Roethlisberger ranks 28th out of the 34 quarterbacks, highlighting the need to improve on this number with hopefully more success than we have seen so far in 2021. 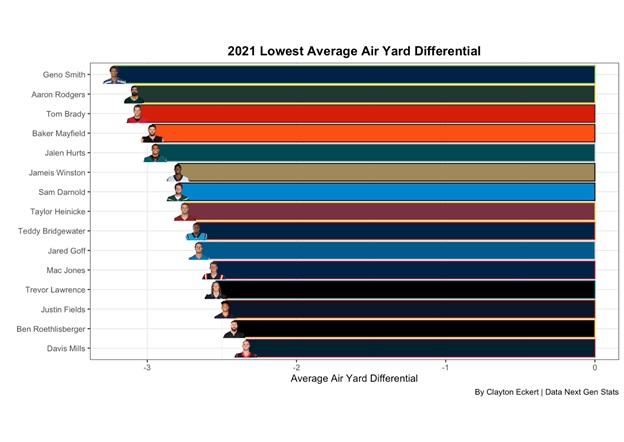 How do you think the quarterbacks will fare in the game?

For the wide receivers, let’s look at the following data points: 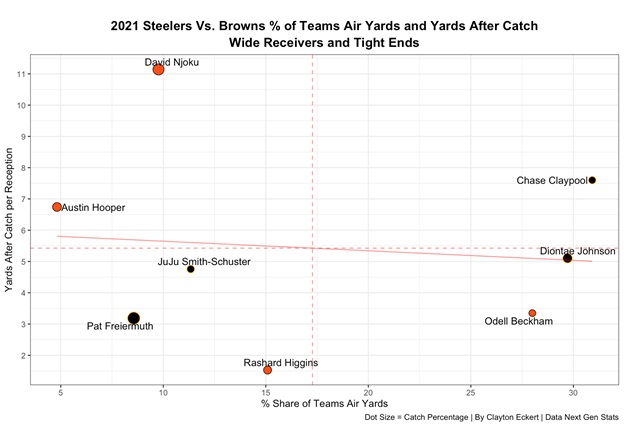 Both teams have had their share of injuries to the wide receiver position, highlighted by Browns Odell Beckham being their only wide receiver on the far right of the graph. Beckham is listed as questionable for the game, but reports point to him playing. If this is the case, it will be interesting to see how he fares considering he has the lowest catch percentage on the graph at 48% emphasizing the poor connection with Mayfield so far this season. Wide receiver Jarvis Landry returned from injured reserve last week and led the team in targets and receptions with Case Keenum at quarterback. Cleveland will be without wide receiver Donovan Peoples-Jones though, who hasn’t played since week six. Browns tight ends Austin Hooper and David Njoku will present a challenge for the Steelers with both players doing well creating yards after the catch and Hooper’s strong performance against the Steelers in the 2020 playoff loss is still a vivid memory.

Pittsburgh’s team air yards have been dominated by wide receivers Chase Claypool and Diontae Johnson. Claypool has the highest yards after catch for the Steelers, something I hope he and Johnson have success with in this game to provide more big plays on Roethlisberger’s short pass attempts. Really hoping to see Steelers tight end Pat Freiermuth continue to see more targets, which we have seen since wide receiver JuJu Smith-Schuster’s injury and considering tight end Eric Ebron being ruled out for the game on Sunday. Freiermuth not only has the highest catch percentage on the graph, but all wide receivers and tight ends in the league!

Who do you think will excel in the receiving game on Sunday?

To wrap up, let’s look at PFF’s top five defensive season grades for the league: 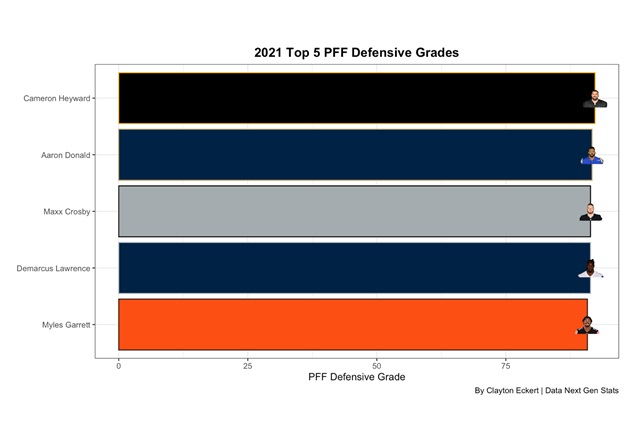 Right away we can see Steelers defensive lineman Cameron Heyward is the top graded defensive player in the league so far in 2021! Also in the top five and the league’s sack leader is Browns defensive lineman Myles Garrett. He has played primarily as the right defensive end so he will likely be a handful for Steelers tackle Dan Moore, whose performance will be vital on Roethlisberger’s blind side. Cleveland defensive lineman Jadeveon Clowney is listed as questionable for the game, which would be a big absence for the Steelers offensive line to not have to worry about. Also hope to see Steelers linebacker T.J. Watt have a big game, stepping up with Heyward to lead the defense to a stronger performance against the run and make a banged up Mayfield feel pressured in the pass game.

Which defense do you think will have the stronger performance?