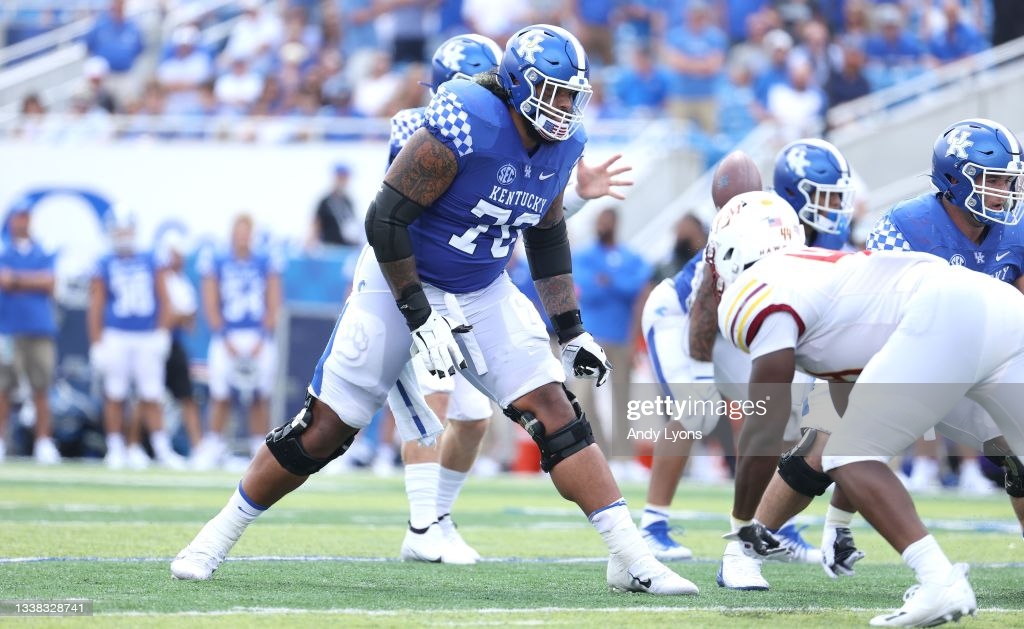 When the Golden Knights travel to the Queen City Saturday to take on the Bearcats, all eyes will be on QB #11 Dillion Gabriel to see if he can move the ball effectively against the talented Cincinnati defense. Gabriel is now in his third season at the helm of the UCF offense, leading the way for the passing attack. He currently has completed 70-of-102 passes (68.6%) for 814 yards and nine TDs with three INTs in three games. UCF is coming off a close loss to Louisville and will need Gabriel to be an efficient passer, avoiding turnovers if UCF wants to complete the upset on the road. Seen more as a “game manager”, a big game will do wonders for Gabriel’s draft stock.

One Bearcat defender that will be looking to rain on Gabriel’s parade Saturday is CB #3 Ahmad “Sauce” Gardner. The 6’3, 200lb junior has made an impact on the field since he stepped foot on campus, having eight interceptions to his name thus far in his collegiate career (two this season) while batting down 16 passes in 2.5 seasons thus far. The long, rangy corner has great instincts, having a natural feel of playing with his back to the football and stays in-phase with opposing WRs. He doesn’t panic when the ball is in the air and is opportunistic in taking the ball away whilst not giving up the big play. Gardner is also a capable tackler, being willing and able to help in run support.

From a size, speed, and skills perspective, Sauce Gardner has all the traits scouts covet for today’s prototypical boundary cornerback. He can match up with receivers on the outside as well as has the length and aggressive play style to handle bigger TEs detached from the LOS. Given that Joe Haden is in the final year of his deal and that the defense could be looking for new blood in the secondary after this season, Gardner should be on Pittsburgh’s radar as he could end up being the top CB drafted in the spring if he continues his stellar play Saturday.

The Iowa Hawkeyes find themselves at their highest ranking in the polls since the great Hayden Fry coached the team several decades ago. The recipe for success for the Hawkeyes to continue their success on the football field will be sticking to their strategy of establishing the run and playing good defense. The team will hope to complete the former with RB #15 Tyler Goodson leading the charge in the backfield. The 5’10 199lb junior has the big-play ability that most Iowa running backs in the past have not possessed, having the initial burst from the handoff to accelerate through the hole and is a legit threat to rip off long runs if he reaches the second level.

Goodson came to Iowa fairly lean, looking more like a receiver in the backfield than a traditional tailback. Since then, he has added much-needed mass and strength to his frame to withstand the rigors of a full season of Big Ten football. The transformation process of his body has also done wonders for his draft status, making him a likely Day Two or Day Three draft pick in the 2022 NFL Draft. Should he have a strong performance against the Boilermakers, look for Goodson to rise up the draft rankings at the RB position.

On the opposing sideline, the Purdue defense will be looking to stifle the run and force the Hawkeyes to pass. Whether it be helping control the LOS or putting pressure on the opposing QB, the Boilermakers will be relying on EDGE #5 George Karlaftis to have a big-time performance if Purdue has any chance at the upset. The 6’4, 275lb junior was a highly-touted recruit out of high school, making an instant impact on the Purdue defensive line to the tune of 7.5 sacks, a forced fumble, two fumble recoveries, and an interception as a true sophomore in 2019.

After an injury-plagued 2020 campaign, Karlaftis looks to rebound his draft status from his freshman season in 2021. He currently only has 1.5 sacks this season, but he still has been disruptive upfront, forcing two fumbles and batting down two passes. Karlaftis plays primarily with his hand in the dirt in a four-man front at DE, but he has the size and physical traits to kick inside as a 4-i or potentially 3-technique in a three-man front. His run defense can be up-and-down at times on tape, thus Karlaftis will be tested against a run-heavy offensive attack from Iowa Saturday, needing to hold his own at the LOS and get after the passer in long down-and-distances.

The Kentucky Wildcats are the next ranked SEC team that get the honor of trying to go between the hedges and attempt to knock off the #1 ranked Georgia Bulldogs. To accomplish this feat, the offensive line will have to win in the trenches against the talented Dawgs defense. Senior OT #70 Darian Kinnard is the leader for the Wildcats upfront, having started since his sophomore season. The 6’5, 345lb does a good job establishing the LOS as a powerful run blocker, consistently displacing defenders backward to create a push upfront and create holes for the Wildcat rushing attack.

Kinnard is solid in pass protection but can be limited in his movement skills due to his size and athleticism. He will have to be on his A-game against a Georgia defense that brings speed and size along the defensive line, having to keep QB Will Levis clean in the pocket to sustain drives and challenge the Dawgs through the air.

One name that college football fans need to become more aware of is LB #17 Nakobe Dean for Georgia. The 6’0, 225lb junior appears to be the next in-line of talented Georgia linebackers, being that smaller yet explosive run-and-chase defender that has the range to move sideline-to-sideline in pursuit of the football. Dean can make an impact in the passing game as well, whether it be as a blitzer from the second level or in coverage, having the speed and fluidity to run with backs and tight ends. Should Dean and the Georgia defense shut down Kentucky’s running game early, look for Dean to get involved chasing down the QB or being tasked with covering the middle of the field.

The Sooners completed a big comeback in Dallas last weekend in the Red River Rivalry against Texas. This week, they will be tasked with holding off TCU at home. While the offense draws the headlines for the Sooners, EDGE #11 Nik Bonitto is one player on the defensive side of the ball all eyes should be on Saturday. The 6’3, 240lb junior was touted as one of the top edge rushers in this upcoming draft class to begin the season, and thus far has four sacks and two forced fumbles in five games played. He has had big performances against Nebraska and Texas, showing the capability to rush with his hand in the dirt or as a standup pass rusher.

Still, it appears that Bonitto, much like the rest of the Sooner defense, runs hot-and-cold, having moments where he shows great pursuit of the quarterback but others where his motor doesn’t run as hot, and he gets pushed back against the run. Bonitto will have to have a strong, consistent performance against the Horned Frogs to compliment the offense and prevent TCU from making the contest a close one like the Sooners have had to deal with for all but one game this season.

For the Horned Frogs, CB #1 Tre’Vius Hodges-Tomlinson will be looking to pester either Spencer Rattler or Caleb Williams in the defensive backfield. If the 5’9, 177lb junior’s name sounds familiar, it should. He is the nephew of All-Pro RB LaDainian Tomlinson, and has made a quick impact for the TCU defense. He ranked near the top off all of college football last season with 13 PBUs, and has the speed, quickness, and change-of-direction movement skills to run and cover receivers on the boundary as well as in the slot. He plays the ball well through the receiver’s hands, attacking the catch point to force incompletions.

His lack of size will scare off some teams from having an outside role and his lack of bulk can make him an inconsistent tackler, but Tomlinson brings an aggressive, feisty play style to the field, willing to stick his face in the fan as a run defender and fearlessly competes with receivers with a clear size advantage. He will have his work cut out for him having to cover the likes of Marvin Mims, Michael Woods II, and Jadon Haselwood, but Tomlinson is up for the task and can do a lot for his draft status if he can add to his interception total this weekend in Norman.