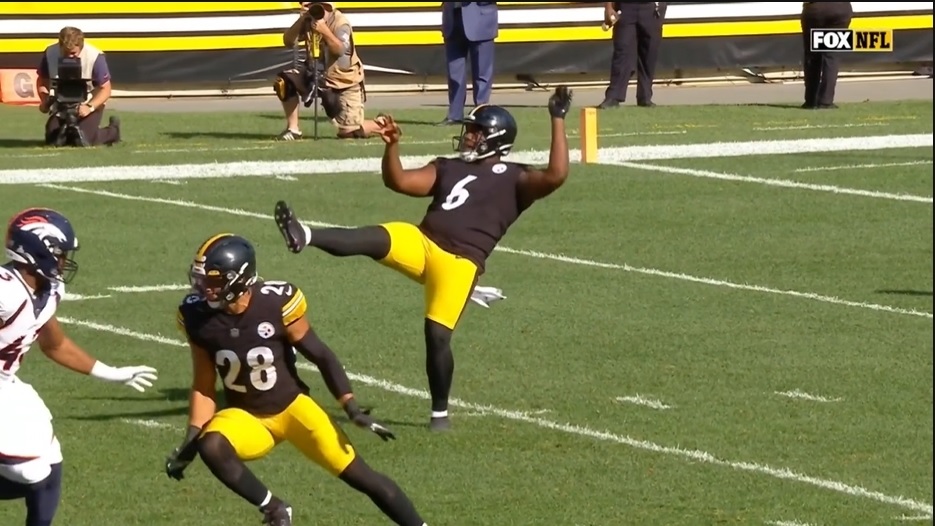 Harris set career highs in rushing attempts and rushing yards while playing his fewest snaps of the season. The Steelers were finally able to get the running game going, and Harris did an excellent job of being patient behind the line of scrimmage and choosing the correct gap. His yards after contact were impressive gaining two, three, or four or more on most plays. He had four carries for double digit yards, and on his 20-yard run he took a really good angle against the linebacker to give him space to get outside.

In the passing game he showed good awareness in pass protection to pick up the right guy, but his technique still needs work. As a receiver he was used primarily in the short area and made good use of his two receptions. On his first catch he used a delay release to let the outside receiver cross his face before breaking outside to pick up six. Later in the game he caught a pass on an angle route, something I have been waiting for, and he gained 14. A very good game overall despite dealing with leg cramps late in the game.

A good running back can help his blockers. On this play, you’ll see Harris (22) just hesitate a bit while pressing to the inside gap. This allows Green to climb to the linebacker and then Harris uses another hesitation to freeze the defender, and he gets about seven yards after contact.

Freiermuth’s usage this year has been consistent. His snap counts in the five games are 29, 33, 30, 32 and 32. As a receiver he was used on several routes including curl, out and up, dig, shallow cross and corner. He only had two targets but both were to convert first downs. He used a delayed released on both, a curl and an out, to find the space to convert. He showed very good effort to get downfield and attempt to block on Chase Claypool’s 59-yard reception.

He needs to improve on creating space in his route running. Defenders are waiting to body him at the break point to slow him when getting into his break.

As a run blocker, there are positives and areas to improve. He puts himself in good position squaring up on the blocker in front of him or when slide blocking across the formation and the effort is there. Once he improves his hand strength to sustain and play strength he’ll be able to handle blockers more often than not and I think he will be a very good blocker.

Green played every snap in this game, the third game in which he has done that. Overall, I think this was possibly his best game. I thought he was good on combo blocks getting movement before climbing to the next level and displayed good quickness getting out in space. He was able to at least stalemate and sustain blocks one on one. His angles moving laterally still need some work and would like to see more push on defenders.

His pass protection this week was much better. His anchor was solid and he showed good aggressiveness and hand strength when engaged with pass rushers. He showed good awareness on stunts and twists on a couple occasions and when uncovered he looked to tag a defender in the ribs when helping teammates.

This has a good angle to see Green (53) get outside on this toss play and take the linebacker out of the play.

This was the fifth straight game playing every snap for Moore. He too showed much improvement this week. Really liked his aggressiveness in the run game to sustain and finish blocks. He showed better push on down and combo blocks. He looked to be more fluid in his movements and it showed in his play.

As a pass protector, his biggest issue has been his anchor and in that area he was much better against Denver. I had him getting pushed back just twice against stab moves. He’ll learn to counter those better moving forward. Getting into his pass sets he was very smooth, there was no panic in his motions he handled outside rushes well along with a couple stunts. He also showed his mobility getting out in space on a tight end screen. Improvement was evident.

Two plays for Moore here. On the first he will block to the inside and shove the defensive tackle out of the way before climbing to the linebacker and keeping him out of the play. The second clip shows him getting out in front on the tight end screen.

Loudermilk saw limited action in Week 5 and was used at the 0, 2i and 3 technique in his reps. I felt he looked quicker off the ball which was an area to improve and was better with his hands. When rushing the passer he used a rip to try to get pressure and got his hands up when he couldn’t get pressure. He nearly had his first sack on a Teddy Bridgewater scramble up the middle. It would have been a one-yard loss but a penalty was called on the offense.

Against the run he was consistent playing with his eyes up while engaged and moving well to mirror the blocker to control his gaps. He is a consistent hustler to the ball anywhere on the field.

Norwood played in the Steelers dime defense and was used in various ways. In Zone coverage, he either played a matchup Zone in the shallow area or rotated to the deep safety in Cover 3. He was used in Man Coverage once again in the red zone as well as on the tight end. He was part of the group that held Noah Fant to three short receptions. His tackles came on a whip route on a third down where he made a quick tackle but the receiver was able to extend for the first down. The other came in the shallow area on a curl to Fant. He has definitely found his role on the defense.

We’ve been waiting for this from Harvin. He only had two punts but both were boomers. The first was from his own 17 and it traveled 56 yards. His second came in the fourth quarter and was blasted 63 yards from his own 22 to flip the field. We knew he had a big leg and he showed it. He also handled all the hold for field goals and extra points well.