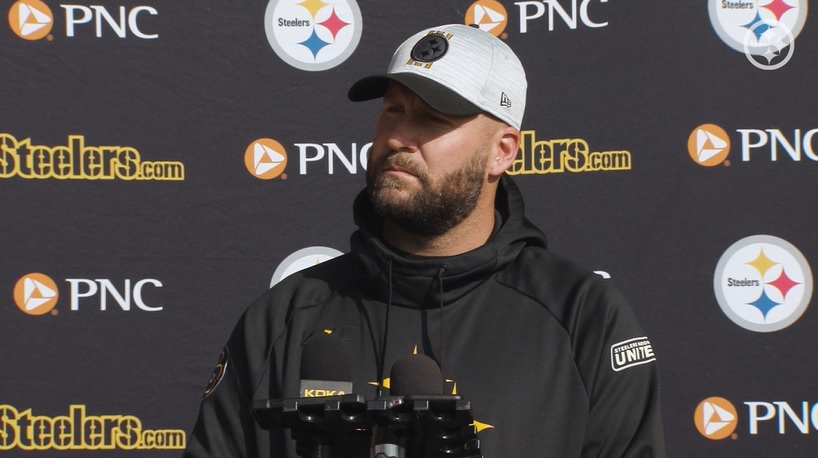 Ben Roethlisberger, much like the Pittsburgh Steelers’ offense, needs to be built from the ground up. Speaking to reporters Wednesday, Roethlisberger said he’s focused on improving his throwing mechanics to improve accuracy and overall play. For him, that doesn’t start with his arm but his lower body.

“As a quarterback, there’s so much involved with your lower body,” he said via Steelers.com. “People probably think as a quarterback or a thrower, it’s how’s your arm doing. Your arm is honestly a small part compared to the whole package. It’s your core, it’s your lower body. I’ve got to find ways to be better with my lower body. Going back, watching the game, a lot of the throws I missed, I missed because my lower body wasn’t in sync. Overstriding, not stepping towards my target. Things that mechanically I know I can fix and need to fix.”

Roethlisberger has never been a quarterback to talk about or seemingly focus on specific QB mechanics. A player who had the natural size, arm, and athleticism to play backyard football for so many years, a Favre-ian gunslinger in mentality and play. Several years ago, former NFL QB Chris Simms talked with Roethlisberger after one training camp practice and peppered Roethlisberger with mechanic-specific questions. Most of Roethlisberger’s answers amounted to “I just throw the football.”

Always reminded of Ben's interview with Chris Simms in 2019. Simms asked about 5 questions about Ben's mechanics & Roethlisberger didn't have any answers. It's always just come natural to him.

At 39, it's no longer coming naturally for him. He now has to focus on this stuff. https://t.co/kSgIM6UMwh pic.twitter.com/eQSGBka0LH

But as those physical gifts degraded, Roethlisberger has had to focus on being a mechanically sharp quarterback. For many years now, his style has evolved – and credit to him for embracing it – from a sandlot thrower to someone who makes most of his plays from the pocket. Had he not changed that element of his game, he wouldn’t even be on the football field in 2021, retired years ago from the abuse his body took getting sacked 45 times a season.

As he’s struggled through the first months, he might be getting back to basics when it comes to quarterback play. His injuries, a pec and a hip (that Roethlisberger implied was very bruised) will make those mechanical adjustments even tougher to make.

“When you’re dealing with pain, it’s harder to get through those things. But nothing I can’t get through. And I’ll work to get through…honestly going back through, it was more about the lower body than my elbow. I think there’s some compensating that happens when you can’t drive through a throw.”

Having a veteran QBs coach like Mike Sullivan may be one reason for an increased emphasis on mechanics. Sullivan has been coaching QBs for decades and with an Army background, is probably a coach who is more detailed-focused and oriented.

It may have taken until he was 39 years old, and there might be an old quarterback mechanics book the team will need to wipe the dust off of, but Roethlisberger is making all the changes he can to salvage not only the Steelers’ season but likely his final one in the NFL.