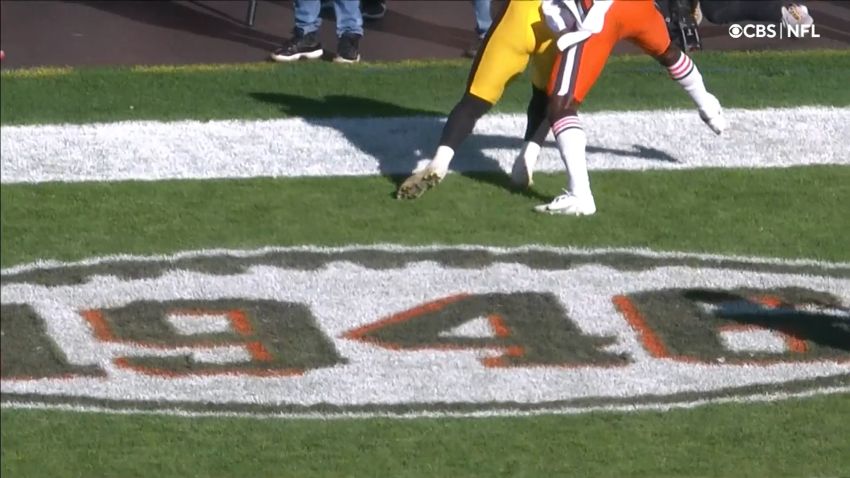 Pittsburgh Steelers quarterback Ben Roethlisberger is not throwing touchdowns at a high rate by any means this season. While he has gotten the ball into the end zone every week, he has thrown only one touchdown in six of seven games thus far.

Two of his eight on the season to date have gone to rookie tight end Pat Freiermuth, who came up with perhaps the most impressive receiving touchdown for the Steelers of the year thus far—maybe of the past couple of years, and at a critical moment.

The play was 4th and goal from the two-yard line, down 10-9—and a kicker to attempt a field goal—with a little over 11 minutes to play in the fourth quarter. The Steelers were clearly in four-down territory, as the tight end acknowledged after the game.

“He [Roethlisberger] told me the play before what to run, and it was kind of weird leverage the way the defender was playing it, but I knew I had to get outside and run to the back pylon, and just saw the ball there and made a play”, the second-rounder said of that play after the game.

He was in tight coverage against Brown safety Ronnie Harrison, who had his left hand between Freiermuth’s arms in the middle of the end zone. That caused him to initially release the ball, but the tight end was able to collect himself, re-gripping the ball, and making sure to tap both feet down before spilling out of bounds with control of the ball.

“That was my issue in camp, and one of the preseason games, was not getting my foot in”, he acknowledged. “I was used to college, obviously, with the one foot in. I’ve been working on that after practice and stuff like that, so I’m happy that it paid off in the game”.

That has surely got to be one of the biggest adjustments every college pass-catcher has to make, having been so familiar with only needing to have one foot inbounds in order to qualify as a reception rather than two. Obviously, it’s more of an issue for rookies rather than more experienced players.

But Freiermuth is the sort of player who puts in the work, as he talked about in his answer, spending extra time after practice making sure that he is touching his feet down when fielding the ball near the boundaries, and boy did that come in handy today.

Right now, it’s one of the most pivotal moments of the season. It gave them the go-ahead points in a divisional game on a possession down. He doesn’t tap his second foot down, and they’re probably looking at 3-4 right now and an increasingly distant fourth place in the AFC North.