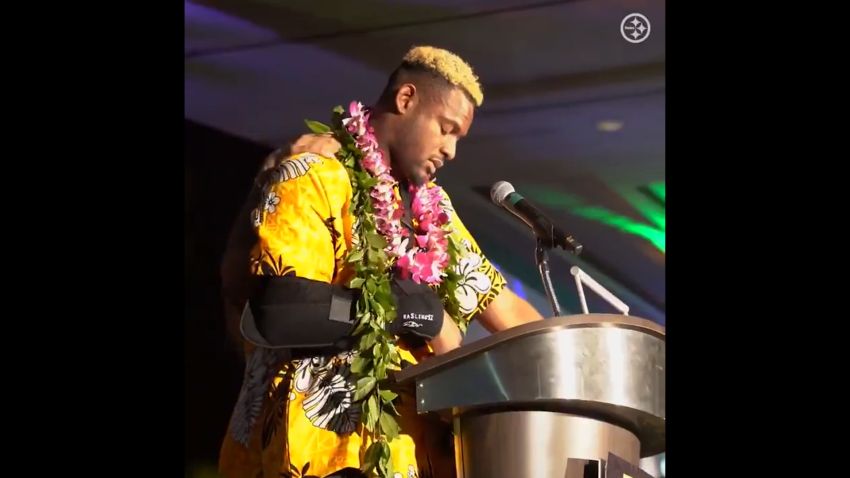 Pittsburgh Steelers wide receiver JuJu Smith-Schuster suffered a significant shoulder injury during Sunday’s game. He had surgery to repair the damage yesterday. But in between, just a day later, sporting a sling on his right arm, he hosted a luau event for his own charity, the JuJu Foundation.

And he was painfully open and transparent about what the previous 36 hours had been like. The team’s Twitter account shared an excerpt of a speech that he gave to those in attendance, displaying his raw emotions about having had the game taken away from him. I will transcribe it, but it’s important to actually watch the video.

At the @JuJuFoundation Luau on Monday night, @TeamJuJu delivered a message to his family, friends and teammates in attendance. pic.twitter.com/sbRAIHU2Y8

Last night was the hardest night for me, because football has done so much for me in my life. More than you guys will ever know. And different things in the world, whether it’s family, friends, or any motivation that may be.

My stepdad put me in football when I was four years old, and it was fun. I mean, you get to hit kids and not get in trouble, right? So I always loved the game. Last night was hard from me because, when I got the call from the doctor—a shoulder injury, I thought, you put it back in and you’ll be fine within two weeks. And our bye week was coming and I was like, ‘I can take two weeks off, come back, and play this season’.

The doctor called me, and he was like, ‘hey, man, I think we have to do surgery. You can get a second opinion’. And he said it was a season-ending injury. I sat there and I cried. I cried all night. I cried because I love this game so much, more than anyone will know.

I know the whole social media thing, and TikTok, and dancing, and all that—I do that because it’s my personality and I love it. Don’t get me wrong. But football will always come first.

Without football, I wouldn’t be where I am today. Without football, this wouldn’t be. I wouldn’t have been a role model for a lot of people. I cried that night because you just never know what the future holds for you. If I look at the light in front of me and I keep my head down and I just keep pushing forward     and I come back even stronger than I was this year. I know God has a bright future for me.

Smith-Schuster came into the game as a fun-loving 19-year-old who would outwork just about anybody else on the field anyway. For the most part, he really hasn’t changed who he is at the core five years later, even if perceptions of him have changed.

But this short speech is, I think, a good reminder of who JuJu Smith-Schuster the person is, the man behind the personality. I think it’s hard not to feel for him, and hard not to root for him. He may not take every step off the field—and in front of a cell phone camera—that others approve of, but he’s never been anything but business between the lines, at least until he or his teammates get into the end zone. Then it’s party time. And I can’t wait to see him back out there delivering a Kamehameha, or another football baby, regardless of what uniform he may be wearing.