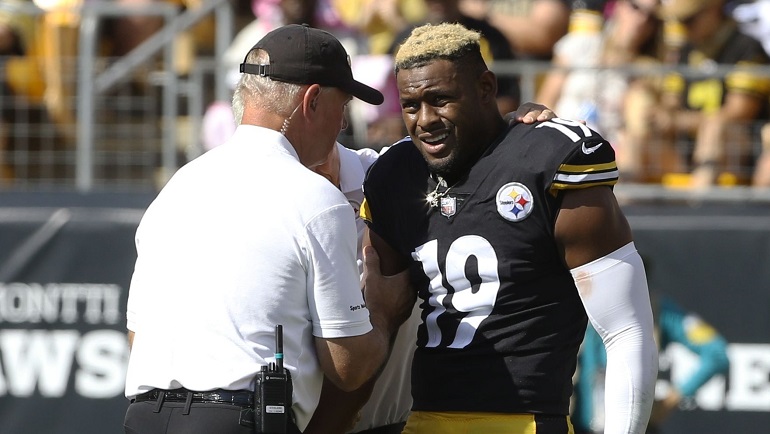 While he’s not about to be getting on with his ‘life’s work’, in the Chuck Noll sense, Pittsburgh Steelers wide receiver JuJu Smith-Schuster doesn’t figure to be playing any wide receiver for a while after suffering a shoulder injury on Sunday that is anticipated to be season-ending.

That ends his season in five games with just 15 catches, and perhaps his Steelers career, drafted there five years ago. He’ll be a free agent in March, and he already decided to come back for less this year, hoping that he can cash in next year. I doubt that happens twice.

Until he’s healthy, however, while he’ll see be around with, engaged with, and helping the team, he’ll have other priorities he might not have in-season. He can, for example, spend more time on his charitable works, including the JuJu Foundation, which hosted a luau yesterday, at which he spoke.

“I know it may seem like times are tough, but right now I am happy in adversity”, Teresa Varley quotes him as saying at the event, for Steelers.com. “I am happy because this is God’s plan. There is something that was said in our receiver’s room, we call it positive land where you stay in a positive mindset and let God do the rest. This is part of the process”.

Smith-Schuster took a direct hit on his shoulder from Denver Broncos safety Kareem Jackson after a short gain on a three-yard pitch. It was immediately clear that he was injured, and left the game. He ultimately went to the hospital, and had his shoulder reduced, according to reports, with surgery coming later this week.

Seemingly a budding superstar just a couple years ago, the 24-year-old has not put up big numbers since his second season in 2018. He has averaged just 8.6 yards per catch since the start of the 2020 season. He produced just 138 yards from scrimmage this season with one rushing touchdown.

After re-signing on a one-year, $8 million contract this offseason, turning down other primarily one-year offers for a couple million more here and there, this is clearly not the way Smith-Schuster envisioned the season going, but he still keeps perspective.

“I grew up in a household with 23 people. It’s unreal that my family and myself are able to do this”, he said at his charity event. “I never thought I would have the opportunity or to be someone to be able to give back in so many different ways. I am just so blessed. I am so thankful to them”.

Smith-Schuster has consistently been a hard worker on and off the field, even if he has drawn a lot of negative attention to himself over the past couple of years for his perceived lack of production in games and his extensive social media engagement. But he’s about as likely as anybody else in the league to get you that third-down conversion. That, and the charitable one, is the JuJu Smith-Schuster I care to pay attention to.