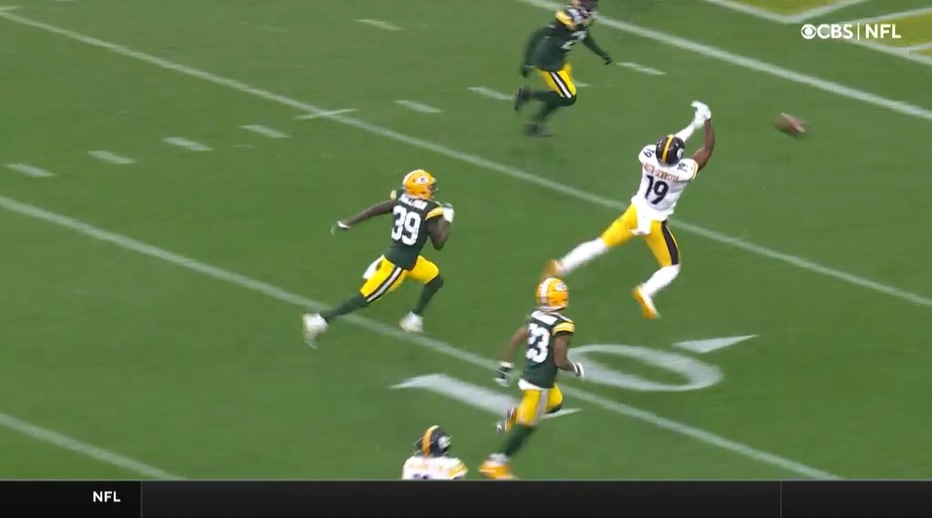 It was a familiar sight on Sunday: JuJu Smith-Schuster working himself open down the field, Ben Roethlisberger misfiring, letting opportunities for points slip away.

Smith-Schuster was visibly frustrated on the sideline after the two misfires from Roethlisberger, slamming down one of the touchscreens the team has on the sidelines to review previous formations and plays. He had every right to be frustrated, considering how open he was, how poorly Roethlisberger threw the football, and how quickly the opportunities were squandered on a day in which the Steelers struggled to consistently move the football against the Green Bay Packers.

That’s becoming a theme for the Steelers’ offense through four weeks, but Sunday was the first time we truly saw Smith-Schuster be frustrated with the play from the quarterback’s position.

After the game, Smith-Schuster spoke with reporters and deflected any signs of issues with Roethlisberger, stating that some of the plays were “miscommunications” (there’s that darn word again) and that he needs to get back into the lab with the veteran quarterback to iron things out on the field.

“It’s just, it’s just communication,” Smith-Schuster said following the game. “I think it’s just having one in each other’s back, you know, we’re going to have games like, it’s not going to go your way and we’re going to have games where it does go your way and you know, there’s no pointing fingers or blaming. It’s just more so, ‘hey, next play mentality.’ You’re like, ‘let’s get after,’ you know? At the end of the day, that’s my quarterback. I’m always gonna have his back, whether I make the play or not.”

At this point in their respective careers, how are they not on the same page and having communication issues? Could that have to do with Smith-Schuster running shorter routes for the second consecutive season, so that when he’s working down the field the two aren’t on the same page?

Kudos to Smith-Schuster here for his answer, stating that he needs to get back in the lab with his veteran quarterback. I appreciate him not going full bore in the media session after a frustrating game, stating how he truly feels. There’s no denying though that this isn’t a JuJu issue on these misfires; it’s all on Roethlisberger, who has been woefully inadequate throwing the football down the field this season, in terms of accuracy and ball placement.

Who knows how the game turns out if Roethlisberger connects on those two throws. They should have been layups for the future Hall of Fame. Instead, they were desperation heaves that had no shot of being completed. That’s something we haven’t seen in a long, long time at the quarterback position in Pittsburgh.

How that gets corrected quickly this season is anyone’s guess.