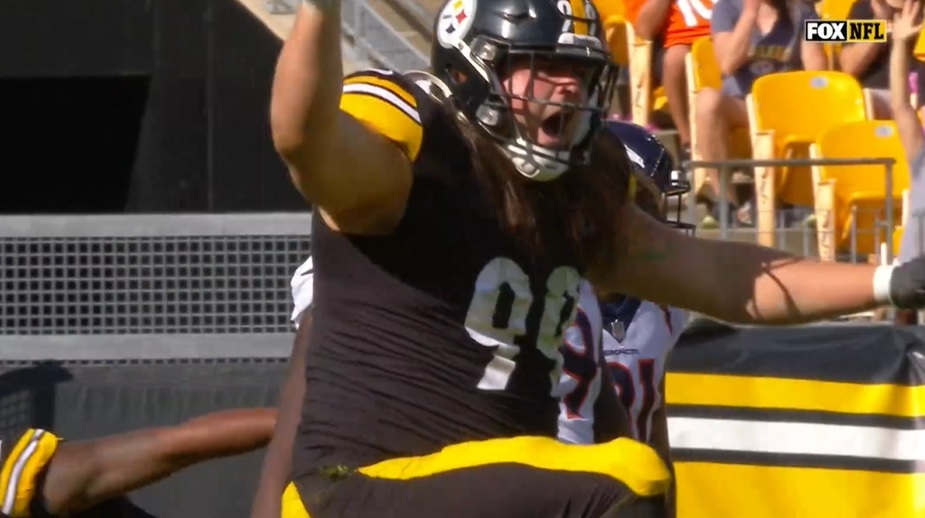 Nearly four years since his last sack, Henry Mondeaux recorded the first of his NFL career in Sunday’s win over the Denver Broncos. A tremendous spin move to beat the right guard, Mondeaux dropped Teddy Bridgewater on 1st and 10 late in the third quarter. Speaking with reporters Monday, Mondeaux broke the moment down.

“The sack was, they gave us an empty set so we knew it was pass,” he told reporters via Steelers.com. “I was in a one-on-one situation. So I knew I had a two-way go on the guard and he overset a little bit and I used a spin move and broke through the line quick. So I was happy about that.”

An impressive athlete, Mondeaux beat the right guard to the inside with the spin then used the “ice pick” to propel himself forward the rest of the way and ensure the guard couldn’t get his hands on him. Take a look at the play.

Mondeaux beating Glasgow with a spin move for a sack #Steelers pic.twitter.com/tJnqpZotf9

As Mondeaux said, he had a “two-way go” as a pass rusher on this play, meaning he had the freedom to win inside or outside based off the guard’s pass set. Here’s an example of it described in Dick LeBeau’s 2002 Bengals’ playbook.

Mondeaux says his film study and preparation helped him know which way to go.

“I was happy about my identity identification before the play. Knowing that it was going to be what it was. We’d seen on film that their guards were oversetting a little bit. So I knew I had the opportunity to go inside. So that was good.”

It was the first sack in a game that counted since October 28, 2017 against Utah, when he was with Oregon. An impressive athlete for a 300-pounder, a guy who has run down kicks and caught fake field goals in practice, he showed off his athleticism on that play. That spin move is something he’s had in his toolbelt for years now, refining and getting quicker with it over time. Here’s a clip of him using the spin in a 2019 preseason game to get pressure against Carolina.

Henry Mondeaux has a seriously potent spin move. Not the first time he's won with it. #Steelers pic.twitter.com/BxbSzPsXCU

Hard work pays off and Mondeaux was rewarded with his first career sack Sunday. Coming into the game, the Steelers’ backup defensive linemen struggled to generate pressure. Combined, Mondeaux, Isaiah Buggs, and Isaiahh Loudermilk had zero pressures on 76 pass rush snaps. Yesterday, Mondeaux and Loudermilk combined for three pressures and Loudermilk had his first sack, though it was wiped out by an accepted penalty.

With the Steelers’ D-line hurting, losing Tyson Alualu and still without Stephon Tuitt, they’re counting on young guys and newer faces like Mondeaux to step up. And in that moment, he did.