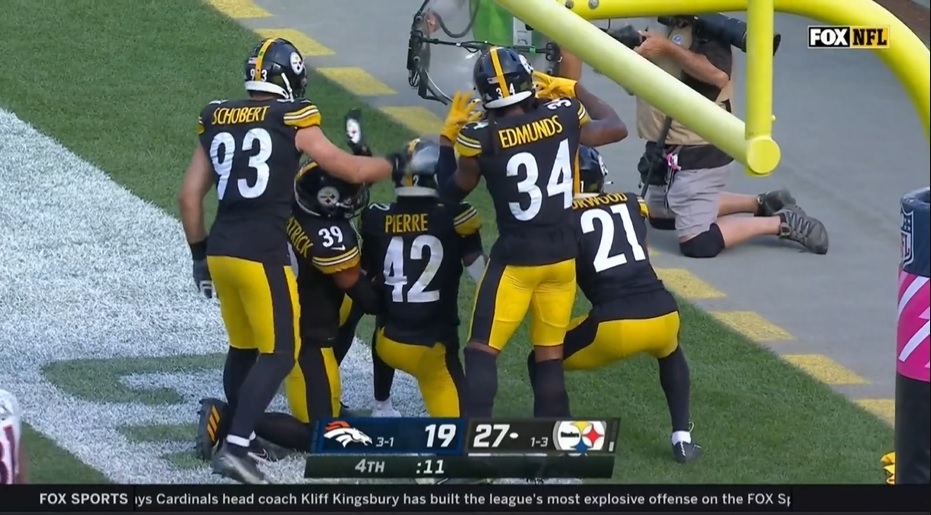 Heading into Sunday night’s matchup against the Seattle Seahawks, the Pittsburgh Steelers appear to be received in a better light by the national media and the fanbase than they were a week ago. Prior to their win at home against the Denver Broncos, Pittsburgh was coming off their third straight loss in Green Bay, falling to 1-3 on the season two games behind the rest of the AFC North. The offense looked lethargic and uninspiring outside of a long TD pass to Diontae Johnson to start off the game against the Packers, going back to the same dink-and-dunk passing game we saw last season accompanied by the league-worst rushing attack in terms of attempts and yards per game.

However, the offense looked rejuvenated against Denver, completing more passes down the field while also getting RB Najee Harris going in the running game, breaking the century mark on the ground for the first time this season. Ben Roethlisberger still missed several throws and the play along the offensive line wasn’t the greatest at times, but compared to the previous three weeks of play, one would clearly recognize the night-and-day difference between the play on the offensive side of the football after the Week 5 victory.

Pittsburgh now hosts a banged-up Seattle team that arguably is dealing with the injury bug more than the Steelers, having just recently placed QB Russell Wilson and RB Chris Carson on IR. They just released starting CB Tre Flowers who was claimed by the Cincinnati Bengals shortly after, and WRs D.K. Metcalf and Tyler Lockett have been dealing with their own nagging injuries in recent weeks. Pittsburgh just lost WR JuJu Smith-Schuster for the season and have yet to activate  DE Stephon Tuitt, and RB Anthony McFarland Jr. from IR, but OT Zach Banner was just activated from IR Saturday and their core players remain in-tact compared to the Seahawks being without their starting QB and RB, meaning that Pittsburgh should be favored to secure their second-straight win in primetime at home.

Should Pittsburgh get the win Sunday, they would move to 3-3 on the year going into the bye week. All things considered, many would have expected that to be the case looking at the schedule prior to the season, just with wins against the Bengals and Raiders and possible losses to the Bills and Seahawks. This begs the question: Is Pittsburgh set up to make a push for the postseason after the bye should they beat Seattle? At first, I was skeptical at the thought knowing how the team has looked to start the year, but the idea seems more plausible for several reasons.

First, Pittsburgh may have lost JuJu for the year, but they look to return Banner and Tuitt soon to fortify the trenches on the offensive and defensive sides of the football. Adding Banner back can only help bolster the running game with his style of play and a heathy Tuitt will not only help an already stout run defense continue to stifle opposing rushing attacks, but also bring much needed pass rush to a defense that has been lacking the pressure and sack production it has become known for the last several seasons. Tuitt is a burden for any offensive lineman to handle on his own, and his presence will help free up Cam Heyward and any of the edge rushers to see more one-on-ones.

Second, the offensive line is starting to gel more with more time playing together as a unit which was evident after watching their performance against Denver. We saw a consistent surge upfront in the run game as well as better pass protection overall than we had seen to start the season. The offense also embraced the identity of establishing the ground game and leaning on their bell cow running back, freeing Najee Harris early and often to the tune of 122 yards rushing and a 69.6% successful run rate. To keep Ben upright and open up the passing game, Pittsburgh needs to continue feeding Harris early and often to gash opposing defenses and open up the passing game down the field.

Third, the landscape of the AFC has opened the door for Pittsburgh to get right back into the thick of things. Both Cleveland and Cincinnati suffered losses this weekend, and the Browns have a big matchup this Sunday against the undefeated Arizona Cardinals. Denver and Las Vegas are both coming off two straight losses, and the Raiders just had their whole organization shook up with the firing of HC Jon Gruden. Kansas City shares the same record as Pittsburgh at 2-3 and can’t stop a nosebleed on defense. The same can be said for Tennessee who have been struggling to play efficient offensively while surrendering yards and points to any opponent. Buffalo currently holds the crown in the AFC, but Pittsburgh remains their only loss.

Given the expectation of the players Pittsburgh looks to get back soon along with the offense finding a semblance of moving the football to compliment a strong defense, the Steelers could be in a good spot after the bye week should they take care of business against Seattle Sunday night. What are your thoughts about the Pittsburgh Steelers’ playoff chances heading into their Week 6 matchup? Do you think they present a realistic chance of making the postseason given the improvements we saw last week and the current landscape of the rest of the AFC? Please leave your thoughts in the comments section below and thanks again for reading!