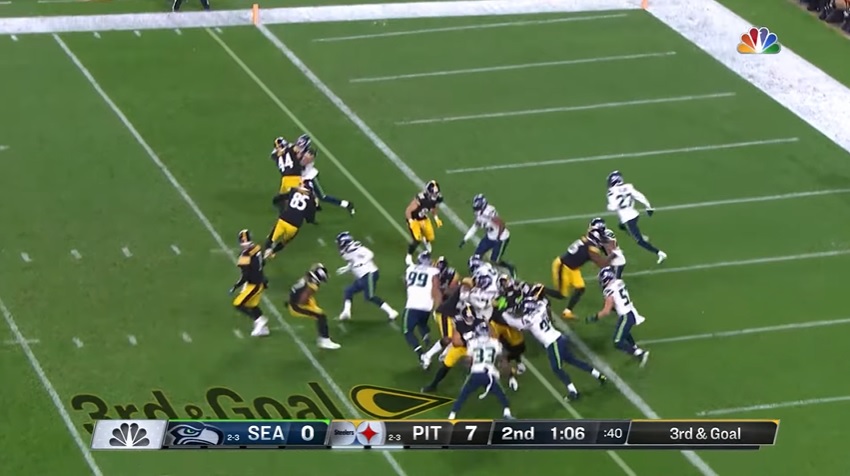 It’s safe to say that Pittsburgh Steelers’ offensive coordinator Matt Canada fooled everyone in the stadium in Week 6 on Sunday Night Football against the Seattle Seahawks when he called an end-around from the 1-yard line for…tight end Eric Ebron.

Canada didn’t call for a dive play to Steelers’ rookie running back Najee Harris. Instead, he called a darn end around from the 1-yard line to his No. 2 tight end.

Some years, that’d be considered absolute poppycock. Not this year, folks.

Canada was in his bag on that drive, helping the Steelers keep the Seahawks’ defense off-balance with a mixture of runs and passes that saw Pittsburgh drive right down the field for the second straight drive, setting up Ebron’s rushing touchdown, becoming the first tight end in Steelers’ history to do such an act on the football field.

What a glorious play call by Canada, and what great execution by the Steelers, catching the Seahawks off-guard, giving the veteran tight end a relatively easy touchdown, though he did need to jump over a defender in the end zone.

That’s the type of stuff we should expect from Canada as a play caller, especially after the All-22 tape revealed that the first-year offensive coordinator previously set up the Ebron rushing touchdown with some window dressing earlier in the game.

The setup play for the Ebron rushing TD and the TD play #Steelers pic.twitter.com/IZPWLDWJ3g

Asked Monday afternoon following the first practice back from the bye week at the UPMC Rooney Sports Complex on the South Side, Ebron credited Canada for the design and play call, adding that the rushing touchdown provided some momentum to the Steelers, who went up 14-0 into the half on the rushing touchdown.

“I just think it’s a play that’s really good,” Ebron said to reporters Monday, according to video provided by Steelers.com. “I didn’t hit it and it wasn’t my play, wasn’t my design. It was just was brought to our attention. I’ve always liked the play because we do a lot of motions and shifts and it fits to what we’re doing right now. So, um, I didn’t know it was gonna, you know, you never know what the play is going to turn out to be like. But [I’m] just happy, you know, it gave us a little momentum there, so that was good.”

The rushing touchdown was certainly a spark for the offense, which was able to punch the ball in from one yard out without relying on Harris to take a pounding in the process.

Canada was certainly feeling himself in the first half, having called a jet sweep to Diontae Johnson that went for 25 yards one drive before dialing up the end around for Ebron in the red zone.

As the offensive line improves, the run game remains successful and Ben Roethlisberger starts hitting on more throws, hopefully Canada can remain aggressive and creative with his play calling, giving the offense an edge in the booth.