Week 5 is in the books, and we saw a much better performance overall from the Pittsburgh Steelers offense. Quarterback Ben Roethlisberger performed much better with the help of running back Najee Harris taking over the workload in the running game, the offensive line performed better collectively, and Roethlisberger had better connection with the receivers overall while capitalizing in situational football.

Let’s start with the quarterback position with the following data points: 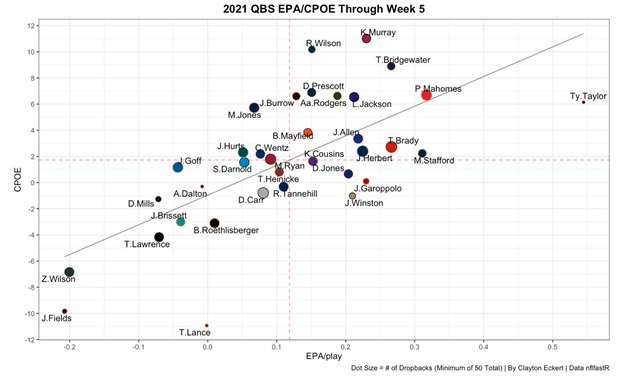 Roethlisberger is still below the mean in both data points but is moving in a positive direction off the week five performance against Denver. It will be very interesting to see if the Steelers offense can continue trending upward as the season progresses, but really enjoyed seeing the Steelers ability to limit his attempts and getting quality over quantity as a result.

Do you think the Steelers offense will find consistency in this regard as the season continues to unfold?

For more context on the improved performance from Roethlisberger, I wanted to look at his weekly completed air yards to highlight my point: 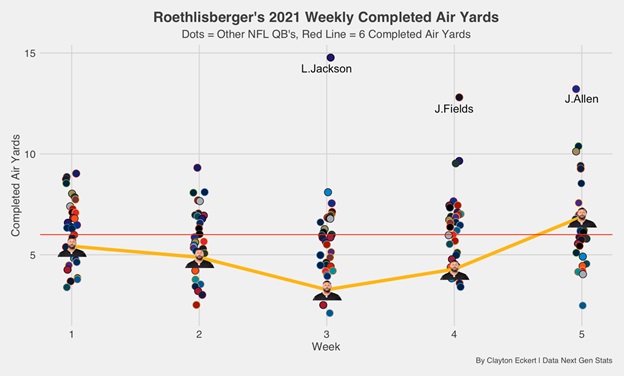 As we can see, Roethlisberger was below the six completed air yards line for the first four weeks, a target number that Dave Bryan highlights for offensive success that is hard to argue with how the Steelers season has unfolded. We can also see league-wide trends including more conservative throws around the NFL in the first two weeks of the season and quarterbacks starting to throw deep as the season has unfolded.

What do you think Roethlisberger’s completed air yards number will look like as the season progresses?

Now let’s look at the running back position, using the following data points: 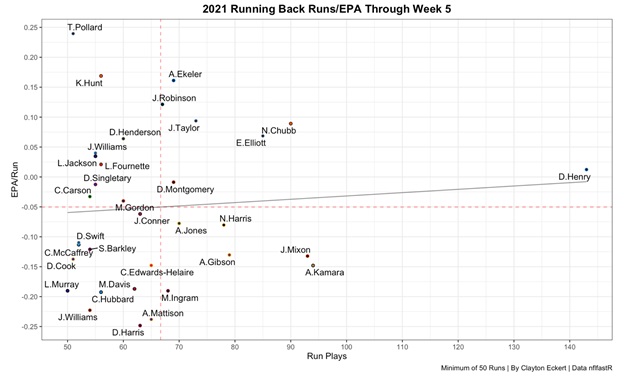 This graph also illustrates the improvement in the running game for the Steelers. Harris is now ranked seventh in attempts with the added workload in Week 5 and shot up in the EPA category. Harris also leads the league in pass targets for running backs, and it will be interesting to see if the workload and success in both the run and pass game can continue. We can also see the Titans have used running back Derrick Henry much more than any other primary back in the NFL.

Now let’s look at the wide receivers and tight ends receiving game with the following data points from Next Gen Stats: 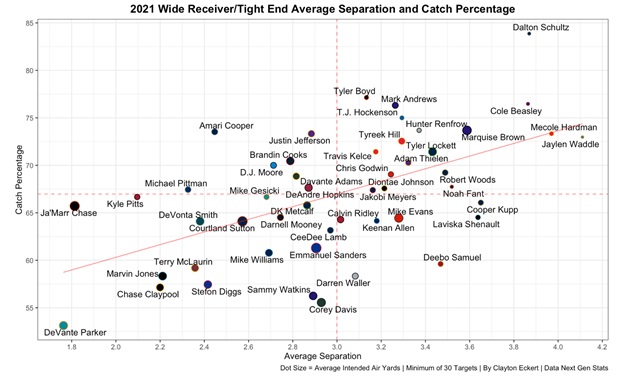 The Pittsburgh Steelers only have two wide receivers and no tight ends with 30 targets or more, Diontae Johnson and Chase Claypool. Johnson is having a good season thus far, above the mean in separation and catch percentage while Claypool saw a much improved catch percentage in week five after an especially low catch percentage in Week 2. This also highlights the importance and necessity for target share to change with the injury to wide receiver JuJu Smith-Schuster, and especially getting our tight ends more involved in the pass game. We will likely see more of wide receiver James Washington as well, and while I am very sad for Smith-Schuster, it will be interesting to see how the offense performs moving forward.

The offensive line had much better outings overall in Weeks 4 and 5, and this is another vital aspect for the rest of the season to see the positive trend continue which we saw opened up the offense, especially in Week 5.

What are your expectations for the Steelers offense in the next few weeks? Thanks for reading and let me know your thoughts in the comments!