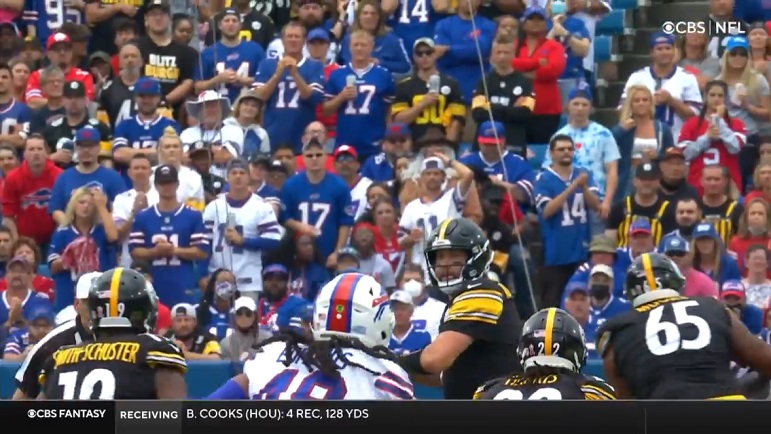 Heading into this season it was already a well-known fact that Pittsburgh Steelers quarterback Ben Roethlisberger doesn’t attempt many passes down the middle third of the field and specifically 10 or more yards past the line of scrimmage. If you have followed along with the weekly passing game charts provided by Next Gen Stats through the first six weeks of the 2021 regular season, you know that that has once again been the case for the Steelers veteran quarterback. So, where does Roethlisberger rank league wide when it comes to his percentage of throws to the middle of the field six weeks into the 2021 regular season? Well, thanks to data compiled by Carter Donnick of The Draft Network, it looks like we can somewhat better answer that question.

Using the weekly passing charts provided by Next Gen Stats, Donnick took on the task of calculating the percentage of middle field throws that every NFL quarterback has attempted through the first six weeks of the 2021 season. As part of his aggregation, Donnick classified a ‘middle of field’ by a quarterback to be a throw attempted between 8-20 yards past the line of scrimmage and within the middle third width of the field. A minimum of 50 passing attempts by a quarterback was also used to narrow the qualifying list some.

As you can see in the table of results data below that Donnick complied as part of his study, Roethlisberger checks in at 30th overall out of 33 quarterbacks with a ‘middle of field’ attempt percentage of just 3.83%. With Roethlisberger being listed as having attempted 235 total pass attempts so far through the first six weeks of the season, that would mean that he’s attempted just nine total ‘middle of field’ pass attempts, as defined by Donnick, heading into Week 7.

Using @NextGenStats passing charts, calculated the % of middle field throws each QB has attempted through 6 weeks.

I classified a 'middle of field' throw as an attempt between 8-20 yards and within the middle 1/3 width of the field. (Minimum 50 passing attempts) pic.twitter.com/hO0YANmhJo

I have included those six passing charts from Next Gen Stats below so you can look at each game on your own. In looking at those and based on Donnick’s ‘middle of field’ criteria, it seems as though Roethlisberger completed five of those nine attempts in total. 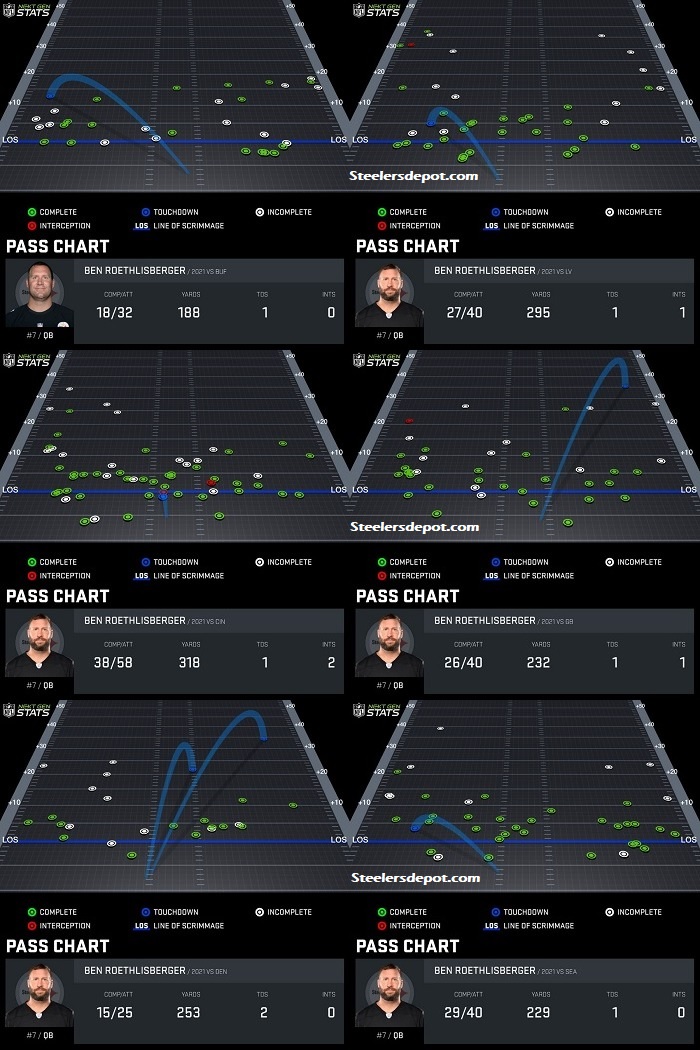 While Roethlisberger’s percentage shown in this study probably isn’t overly surprising to most of you reading this post, maybe the results of the other three AFC North quarterbacks are. Personally, I was surprised to see Baltimore Ravens quarterback Lamar Jackson ranked first overall. That said, it’s been a running known fact since he came into the league that Jackson isn’t as overly effective passer when it comes to him making throws down the field and outside numbers.

As for Cincinnati Bengals quarterback Joe Burrow and Cleveland Browns quarterback Baker Mayfield, they both have low ‘middle of field’ pass attempt percentages similar that of Roethlisberger’s. Mayfield’s, in fact, is even slightly lower than Roethlisberger’s is entering Week 7. He obviously won’t be playing Thursday night in the Browns Week 7 game against the Denver Broncos.

So, is Roethlisberger’s low ‘middle of field’ pass attempt percentage through the first six weeks of the 2021 regular season concerning? The short answer to that question is most definitely yes. That said, it’s been a known characteristic of his overall game for quite some time now. Will it improve moving forward into the remainder of the 2021 regular season? Probably not very much if it does.

A bigger concern related to Roethlisberger’s overall passing game once again this season is his inability to complete deep passes down the field and regardless of direction. Most notably, his low completion percentage on throws 20 or more yards down the field. Roethlisberger’s average air yards completion distance through the first six weeks of the 2021 regular season is just 4.4 yards, and that’s second to last in the NFL of the qualifying quarterbacks, of which there are 33. If he can increase that stat by a full yard or more, regardless of the direction of his passes, the Steelers’ offense should benefit greatly from that and especially if the unit continues to make improvements in their running game.