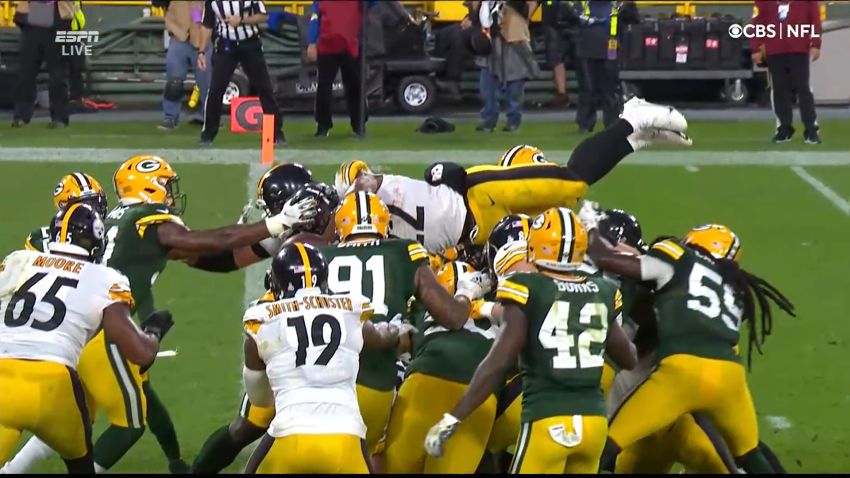 Reasoning: The rookie running back had arguably the most complete game of his young career to date so far, having his best day on the ground while also contributing through the air.

Although he was held to under 100 yards from scrimmage for the third time in four games, Najee Harris, the Steelers’ first-round pick, had probably his best game of the season so far yesterday against the Green Bay Packers, looking his most assured as a ball-carrier.

While he has had some excellent individual moments in each game, and has created opportunities that were not there on the field by forcing defenders to miss, he has also had his rookie moments, his dropped passes, his missed holes, his missed blocks.

This is as close to error-free as he has gotten so far, after a first pass of the game, and he was able to somewhat regularly create extra yardage, not just through his elusiveness, but even using his size and power to move men.

None of this is, of course, surprising. This is who we knew Harris to be before the Steelers ever drafted him. Getting to see it develop and fully bloom over the course of the past month as he transitions into the NFL, however, is significant.

He hasn’t had much to work with—the offensive line’s run-blocking has been extremely suspect, and the passing game has failed more often than it has succeeded—but there isn’t much more that anybody could really ask of him at this point.

But he will continue to get better. He’ll make even more plays out of nothing. He’ll find ways to avoid more contact and tackles in the backfield for negative plays. Better learn how to set up his blocks, and figure out when to be patient and when to attack. We’re seeing him grow in these areas on a weekly basis.