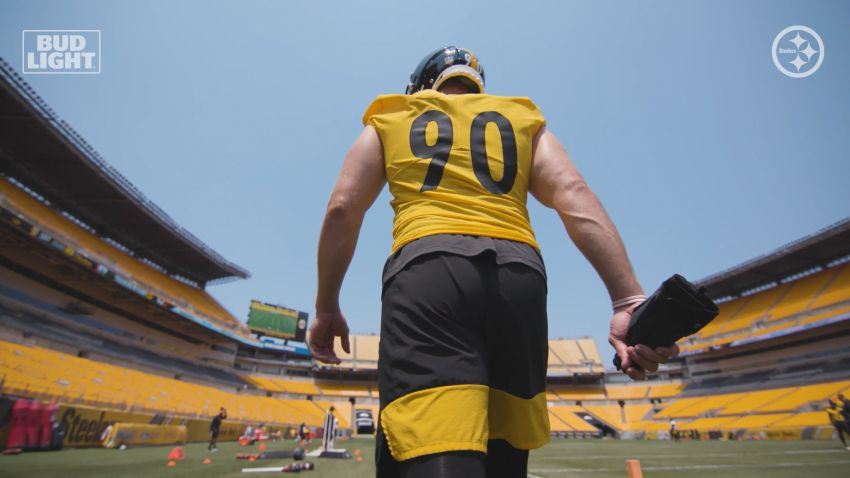 The Pittsburgh Steelers just completed a massive four-year, $112 million contract extension for fifth-year outside linebacker T.J. Watt, who has been one of the best players in the NFL over the course of the past few years. He’s ready to focus on football now, with his future secured. But, having sat out of practices all offseason until this past week, will he be physically ready to go?

“They always say it’s different being in shape and being in football shape, and I believe that as well”, he admitted while speaking to reporters earlier today. “But we worked extremely hard to have the Catapult GPS monitor on me, reflecting numbers from last year and trying to make sure that I was in the top percentile of the guys that were active practicing”.

While he may not have been formally participating in team drills and things of that nature, Watt always continued to do work on his own off to the side, even doing some work with the other linebackers, and he’s been a full participant in all other team activities, so this is very unlike, for example, Le’Veon Bell showing up six days before the regular-season opener in 2017.

“I feel like we did a great job”, he said of the team’s strength and conditioning staff keeping up with him. Garrett Giemont, Marcel Pastoor, Justus [Galac] also in the strength staff, Rodain [Delus] as well, those guys made sure I was ready”.

Still, there is such a thing as ‘hitting shape’, as defensive coordinator Keith Butler would like to term it, and you can’t get in hitting shape without hitting. For as much work as he may have put in on his own, Watt hasn’t been on the field in pads and hitting for very long, so that is an unknown variable that must be explored in-game on Sunday.

“This week in practice I felt great. I feel very, very confident”, he said about his physical conditioning, “but at the same time, I also have to be smart and make sure that if I am feeling super gassed, I take myself out of the game. But like I said, I don’t think any of that’s gonna be an issue because I do truly feel great”.

How much time will he spend on the field? My guess is that he’ll play less than he is able, because the coaching staff will be careful with him—especially after investing $80 million fully guaranteed in him. They signed Melvin Ingram in part to secure quality depth at the position so they don’t have to overextend their starters, after all. Still, expect him to be out there for at least two thirds of the snaps or more.