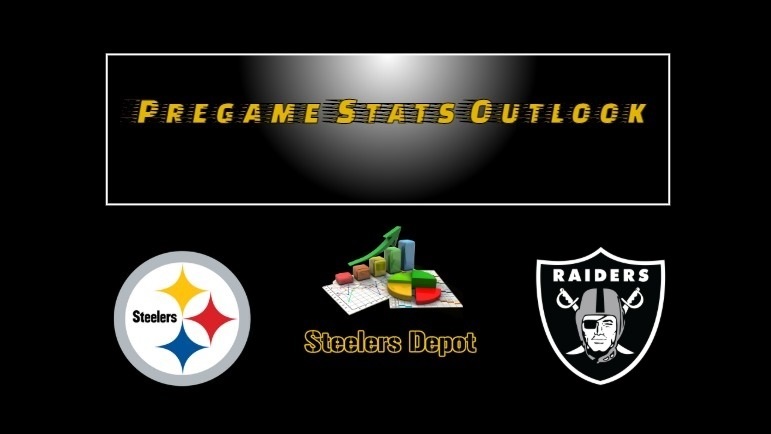 Today I wanted to take a look at some week one datapoints, discuss some takeaways for the Pittsburgh Steelers Week 2 matchup against the Las Vegas Raiders, and pose some questions for you the readers.

Let’s start with some datapoints that measure quarterback success: 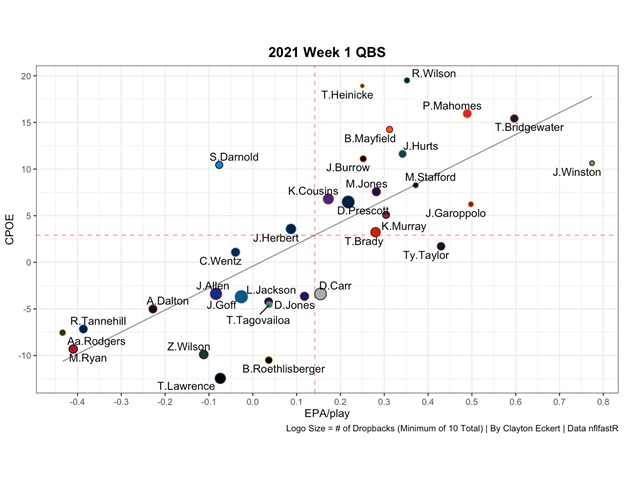 It is only a one game, but I was curious to see what the datapoints looked like in week one. Right away from a Steelers perspective we see quarterback Ben Roethlisberger had a very low result in regard to the CPOE metric, and only Trevor Lawrence had a worse mark. This highlights one of the takeaways from my recap after the game, Ben having accuracy issues and miscommunication with wide receivers (mainly Diontae Johnson) on routes. This is something that I am optimistic will improve as we get further into the season as the offense gets more time to gel, and really hope to see Roethlisberger show more consistency throughout the game against the Raiders. Ben did provide quality throws in the second half against the Bills, and since the defense played so well along with the special teams touchdown it was ultimately enough to get the win. It would be very encouraging to see Roethlisberger get the offense on the scoreboard early against a team that many expect the Steelers to beat and considering fast starts have been a weakness for this team.

We can also see how Raiders quarterback Derek Carr fared against the Ravens defense in anticipation to our week two matchup. The main takeaway from watching the game was similar to Roethlisberger, seeing accuracy issues from Carr, and Darren Waller with a couple drops and a low catch percentage of 55.6% on his 18 targets. Here’s to hoping the Steelers defense will have a similar performance to week one, limiting the oppositions primary target in Waller and providing consistent pressure on Carr.

What kind of game do you see Ben Roethlisberger having against the Raiders? How will Derek Carr perform against Pittsburgh? Which quarterback performances did you enjoy the most from week one league-wide?

The Raiders will be without Josh Jacobs this week, and the Steelers caught a break there in my opinion.  Jacobs rushed for two touchdowns on his ten attempts in week one along with forcing four missed tackles and two runs of ten+ yards. It will be interesting to see how Kenyan Drake does with likely a higher workload on Sunday, considering he had a low average of 1.8 yards per rush on six attempts, but caught all five of his targets with an 11.8 yards per reception average.

The main narrative for Najee Harris this week was playing on every offensive snap and the lack of rushing success. I wanted to share a different perspective, starting with how he was used in the offense. Seeing him line up in a variety of spots and have good moments in the pass blocking department was great to see in regular season action, and especially enjoyed seeing him line up three times as a slot receiver and three as a wide out as well. I know this did not have a huge impact on the week one game considering Najee only had one catch on three targets, but I am excited to hopefully see more of this next game and throughout the season.

How do you think Najee Harris will perform against Las Vegas? How will the Raiders rushers fare without Josh Jacobs against the Steelers defense?

Speaking of the Steelers defense, they had a very high rate of pressures against Josh Allen this week and thought the defense did well in coverage also. Let’s look at how team defenses did with the following datapoints from week one from Pro Football Focus: 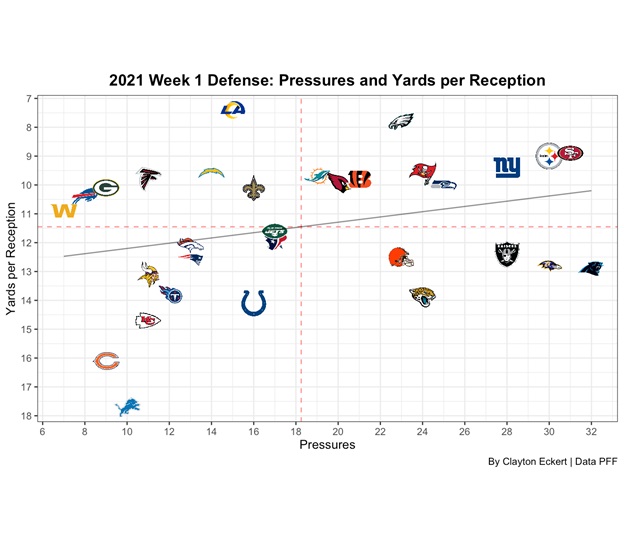 I really enjoyed the results here, seeing the Steelers on the top right of the graph and also where the rest of the NFL stacked up. The Panthers, 49ers, Steelers, and Ravens had the highest number of pressures with Pittsburgh and San Francisco allowing fewer yards per reception. Both teams ranked top four in both categories and they also won in week one. There were nine teams above the mean for both datapoints, and eight of those nine teams won! The goal here was to see which teams had a good pairing of rush and coverage since I seemed higher on the Steelers coverage performance from week one than others. I realize the datapoints do not tell the whole story, especially on a small sample size but found it interesting and the results checked out well with team success and what we have to go off of so far in 2021.