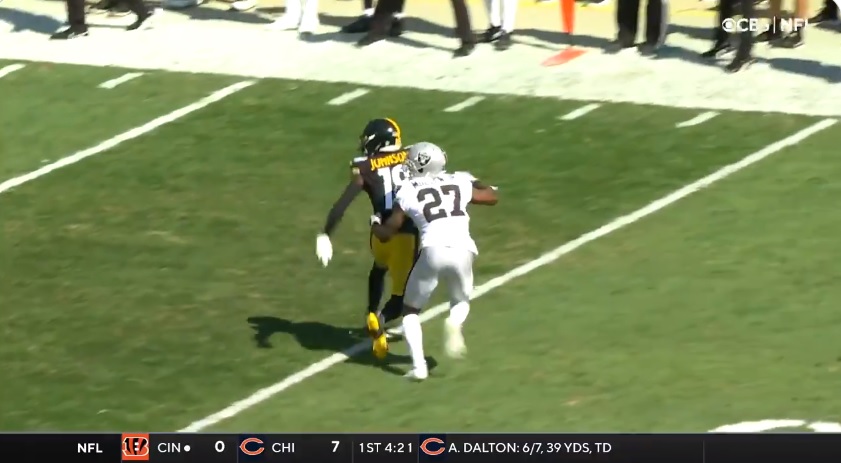 The Pittsburgh Steelers’ offense struggled for most of the game in Sunday’s 26-17 loss to the Las Vegas Raiders, a game where Pittsburgh also lost OLB T.J. Watt and DL Tyson Alualu to injury.

The Steelers’ opening drive stalled out at their own 46-yard line when QB Ben Roethlisberger couldn’t connect with TE Eric Ebron on third and nine. The punt by Pressley Harvin left Las Vegas to start their opening drive on their own 16-yard line. The Steelers forced a stop when Watt stopped RB Kenyan Drake short of the sticks on fourth and two.

The Steelers’ drive ended on third down when a heave by QB Ben Roethlisberger was picked off by CB Trayvon Mullen. Mullen returned it to the Steelers 39, and after an 11-yard catch and run by Kenyan Drake, Carr was sacked by Watt and fumbled, but the Raiders recovered. On 2nd and 11, Carr fumbled the snap to set up a third and 14 but Raiders’ rookie OT Alex Leatherwood committed a false start to make it third and 19. After a stop on third down, Raiders kicker Daniel Carlson hit a 46-yard field goal to give the Raiders a 3-0 lead late in the first quarter.

Pittsburgh moved from their own 22 to the Las Vegas 38, mostly on the strength of a 17-yard reception by WR JuJu Smith-Schuster. On third-and-four, Roethlisberger missed deep to WR Chase Claypool and the Steelers went for it on fourth-and-four, and once again Roethlisberger looked in the direction of Claypool but he took a shot and the pass fell short for a turnover on downs.

Raiders’ QB Derek Carr led another scoring drive, with a 17-yard reception to WR Hunter Renfrow along with a questionable unnecessary roughness call against OLB Alex Highsmith helping the Raiders move downfield. Carlson connected on his second field goal of the game, this time from 33-yards out to give the Raiders a 6-0 lead.

Pittsburgh started off their next drive with two first downs, as Roethlisberger hit WR Diontae Johnson for a 13-yard gain before RB Najee Harris ran for 14. The Steelers lost three yards on an end-around to Claypool, but Roethlisberger hit Smith-Schuster for a five-yard gain before a big 41-yard completion downfield to Johnson. Two plays later, the Steelers went back to the end-around and it worked as Smith-Schuster ran it in from three yards out and Chris Boswell’s extra-point gave the Steelers a 7-6 lead.

The Raiders’ next drive resulted in their third field goal of the half, as the 13-play drive was highlighted by a 13-yard completion to WR Henry Ruggs III and 25-yard reception by TE Foster Moreau. A seven-yard touchdown pass to WR Bryan Edwards was wiped off the board due to a holding penalty against Leatherwood, and Carlson capped off the drive with a 41-yard field goal with two seconds left in the first half to give the Raiders the lead back at 9-7. The drive was costly for the Steelers, as Watt exited with a groin injury and wouldn’t return.

Las Vegas got the ball to start the second half and got a first down but nothing more, as their drive stalled out at their 47. The Steelers’ offense didn’t do much better, only picking up one first down of their own before a booming 58 yard punt by Pressley Harvin III. WR Hunter Renfrow returned it nine yards to the Las Vegas 18-yard line.

The Raiders started off their drive with an 18-yard completion to Bryan Edwards before Carr hit Drake for nine. OLB Melvin Ingram picked up his first sack on the next play, but Carr then found Renfrow for 23 yards. After Drake was stopped for a one-yard gain by OLB Jamir Jones, Carr and Ruggs connected for a 30-yard gain and on the next play the Raiders scored their first touchdown of the game after Fabian Moreau’s touchdown reception in the corner of the end zone. Carlson’s extra point was good and the Raiders took a 16-7 lead.

Pittsburgh once again couldn’t get anything going on offense and their drive stalled out at the Las Vegas 45. However, Harvin booted another nice punt to pin the Raiders at their three-yard line. The Steelers defense got a stop at midfield to force a Las Vegas punt, and A.J. Cole III’s punt went into the end zone for a touchback.

After a three-yard Harris run, Roethlisberger and Claypool hooked up for 52 yards on second and seven to move to the Las Vegas 25. A fumbled snap and throwaway by Roethlisberger on first and ten led to a second and ten shot by Roethlisberger but he couldn’t connect with Johnson in the endzone. On third and ten, Najee Harris scored his first career touchdown on a 25-yard catch-and-run. A scuffle after the play led to the ejection of OG Trai Turner, but Boswell’s successful extra-point made the score 16-14.

On third and ten from the Pittsburgh 39, Carr found Ruggs again, this time for a 61 yard touchdown and the Raiders extended their lead to 23-14.

The Steelers went three-and-out on their next drive, punting on fourth and short from their own 34. Peyton Barber started off the Raiders’ drive with an 11-yard run and Drake picked up five of his own on the next play. Barber would pick up two on his next carry before losing four on third and three and the Raiders were forced to punt. Ray-Ray McCloud returned the punt 15 yards to the Steelers 32. The Steelers moved into Raiders’ territory to their 38 which set up the longest field goal ever at Heinz Field, as Chris Boswell nailed a 56-yard try to cut the Raiders lead to make it a one-score game at 23-17.

The Steelers couldn’t get the stop they needed, as Carr found TE Darren Waller for 25 yards on second and 7, and then Barber ran for 13 yards to move to the Pittsburgh 32. With 24 seconds left, Carlson hit his fourth field goal of the day from 45 yards out to seal the Raiders 26-17 win.

The Steelers got the ball back and ran one play, an eleven-yard reception to Johnson that ended in disaster when he went down with an injury. The loss moved the Steelers to 1-1.

Next week the Steelers will look to get back in the win column in their first AFC North matchup of the season when they face off against the 1-1 Cincinnati Bengals at Heinz Field at 1 p.m.