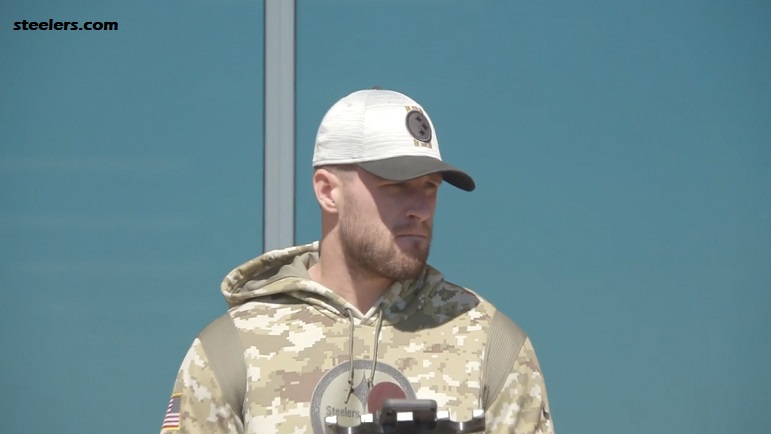 Will the Pittsburgh Steelers have outside linebacker T.J. Watt for their Sunday Week 3 home against the Cincinnati Bengals? As Friday starts to come to a close, it’s extremely difficult to answer that question. After Friday’s practice, however, Watt, who is dealing with a groin injury, did somewhat update his own status, even though it was a pretty vague attempt to do so.

“I was able to still run around out here [today] and do a lot of things that I need to do to keep the door open for Sunday,” Watt said. “I’m excited to get the rest of today and tomorrow to continue improve my body and see where I am on Sunday.”

Watt was pressed some on Friday to disclose if he thinks he’ll ultimately be able to play on Sunday against the Bengals as he essentially enters the weekend as a likely game time decision.

“This isn’t going around playing pee wee football,” Watt said. “This is going around playing with guys that do this for a living. It’s just trying to be smart, but at the same time just knowing your body more than anything. I felt like I was able to do a good amount this week to leave the door open for Sunday.”

Watt also made it clear on Friday that he isn’t worried about how he might perform on Sunday against the Bengals despite being limited in practice this past week.

“I always feel confident going into a game and it really doesn’t matter how many reps I get throughout the week,” said Watt.

Reading between the lines, Watt also seemed to make it clear on Friday that it is still very early in the season and thus he needs to make sure that he doesn’t rush back to get back on the field if he stands a chance at possibly aggravating his groin injury worse, which would undoubtedly result in him missing additional games.

“Just trying to be smart at the end of the day,” said Watt. “It’s a long season.”

The Steelers protected two practice squad outside linebackers this week so maybe there’s a clue in that decision. We will know by 4:00 p.m. EST on Saturday if either Derrek Tuszka or Taco Charlton will be elevated to the active/inactive roster for Sunday’s game. If one or both are, that will serve as a good sign that either Watt or Highsmith, or even both, might miss Sunday’s game against the Bengals.

Stay tuned, the Friday injury report is about to be released.