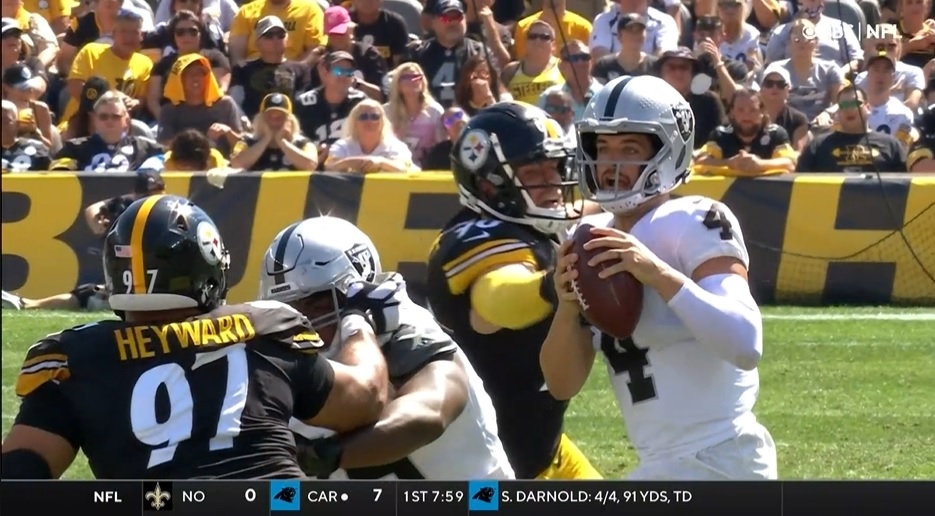 It’s usually more sad than weird when the Pittsburgh Steelers lose. And that’s no exception after the team’s Week 2 loss to the Las Vegas Raiders. But let’s talk about the weird we can find.

– To say the least, the Pittsburgh Steelers’ offense has been quiet the first two weeks. Even with the special teams touchdown in Week One, they’ve been held under 24 points their first two games for the first time since the 2013 season. That year, they scored nine and ten points and finished the year 8-8 with the 16th-ranked scoring offense in football.

– Pittsburgh has scored seven total first half points their first two games. That’s the fewest they’ve amassed the first two weeks since the 1997 season, when they also scored just seven. Zero against Dallas, seven against Washington. Like 1997, they started the year 1-1. They’d finish it 11-5. Hopefully this team does the same.

– Najee Harris found the end zone through the air today but has yet to score on the ground through his first two NFL games. It’s the first time he hasn’t scored a rushing touchdown in consecutive games since September 28th-October 12th of 2019 at Alabama, part of a streak of four scoreless contests. Point is, it’s been awhile for him not to run his way into the end zone. Welcome to Pittsburgh.

– Harris’ 38 yards rushing were the fewest he’s had in a game with double-digit carries, college or pro. Ten for 38 today.

– Pittsburgh’s rushing offense through the first two games of 2020? 250 yards.

– Pittsburgh’s rushing offense through the first two games of 2010? 114 yards.

– JuJu Smith-Schuster’s three-yard rushing TD was the first of his career, college or pro.

– Since 2014, Chase Claypool is just the second Steelers’ wide receiver to have fewer than four catches on 9+ targets. Donte Moncrief in 2019 against the Patriots is the other.

– Most forced fumbles by any NFL defender since 2017.

– Watt had two forced fumbles all of last year. He has two in the first two weeks and really, the first six quarters.

– Getting a little specific here but bear with me. Henry Ruggs’ TD was the first 60+ yard score the Steelers have allowed on 3rd and 10+ since 2015 when Russell Wilson hit Doug Baldwin for an 80 yard TD on 3rd and 10. It’s just the fourth such play allowed under Mike Tomlin.

– Robert Spillane’s 12 tackles today are an NFL high. Most he’s had in a game since October 18th, 2017 against Western Michigan.

– Tyson Alualu had missed just four games in 12 seasons prior to 2021. Assuming he’s done for the year, he’ll now miss the next 15. Of players part of his 2010 draft class, only Ndamukong Suh had played more games.

– As the broadcast noted, Chris Boswell’s 56 yard field goal is the longest ever at Heinz Field.