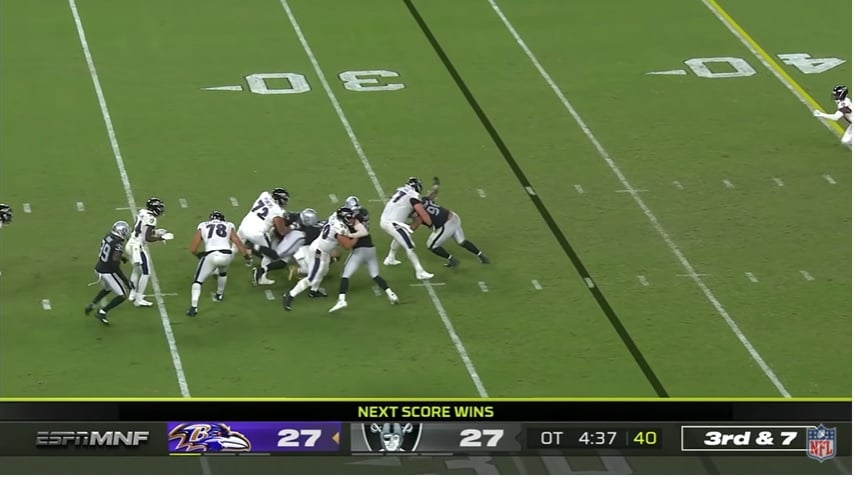 It’s a 4-3 front under new DC Gus Bradley, a man the Steelers are pretty familiar with. Big interior 1T in Jonathan Hankins, a skinny 3T in Quinton Jefferson, and talented edge rushers led by Maxx Crosby and Yannick Ngakoue. Like virtually all 4-3 outfits, they play multiple people along the edge. Crosby rarely came off the field in Monday night’s win over Baltimore (91%) while the other guys rotated. Ngakoue at 49%, Carl Nassib at 44% and Solomon Thomas, who can play inside/out, at 22%. The team will be without Gerald McCoy, lost for the season due to a knee injury.

Veteran KJ Wright is a base SAM linebacker but comes off in nickel packages with Corey Littleton (WILL) and Denzel Perryman (MIKE) staying on the field. Perryman was the only linebacker in dime.

Overall, they’re a sound unit up front, though dealing with the Ravens’ rushing attack is difficult. Baltimore rolled for 189 on the ground last week. Some of that is Lamar Jackson scrambling but the Raiders didn’t help with so many missed tackles. A league-high ten of them in Week One. And with them allowing only 57 YAC in the pass game, that tells you they missed most of them on the ground. Like Ty’Son Williams’ long rushing score. Raiders’ linebackers are aggressive and fast flowing against pullers. You can manipulate these guys if you use the pullers as window dressing. Watch the FB come across coupled with the back pressing the hole to move Littleton out of his gap. Couple misses later and Williams is in the end zone.

The DEs chase hard from the backside on pulls. So the Steelers may want to run more zone or make sure they’re accounting for the backside player. It can be tougher to judge a run game against Baltimore versus Pittsburgh because the Ravens will read the backside player and try to hold him with the threat of Lamar Jackson’s legs, but guys like Crosby and Ngakoue take off after the football. Aggressive front seven.

Some other numbers. Baltimore struggled on possession downs last week, going 3-12 on third down and 4-14 on third/fourth down combined. Littleton, Perryman, and safety Jonathan Abram (#24, plays in the box a ton) all tied for the team-lead with ten tackles in the opener.

Starting with the Raiders’ defensive line. A handful (and then some) for the Ravens’ offensive line last week. Here’s what their d-line did to Baltimore:

That’s led by Crosby, who will primarily line up as the LDE and matched up against Chukwuma Okorafor. But he isn’t exclusive to that spot either. They can move those guys around and may be more tempted to do so this week because teams know what Crosby did in Week One and they may want to test a rookie like Moore Jr, even if he held his own against the Bills. 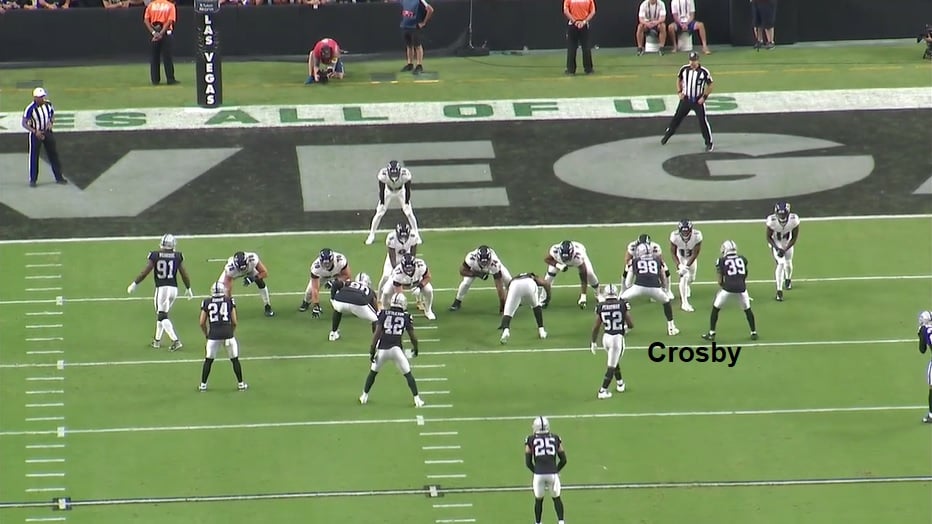 Against Baltimore, the Raiders – like Pittsburgh to Buffalo – barely blitzed. Just 7.7% of the time, tied for 30th and only the Steelers blitzed less.

From a coverage standpoint, the Raiders were consistently in a three-deep structure versus the Ravens. Not always straight cover three but a three-deep coverage with a single high post safety and the corners playing the deep 1/3. Some examples. 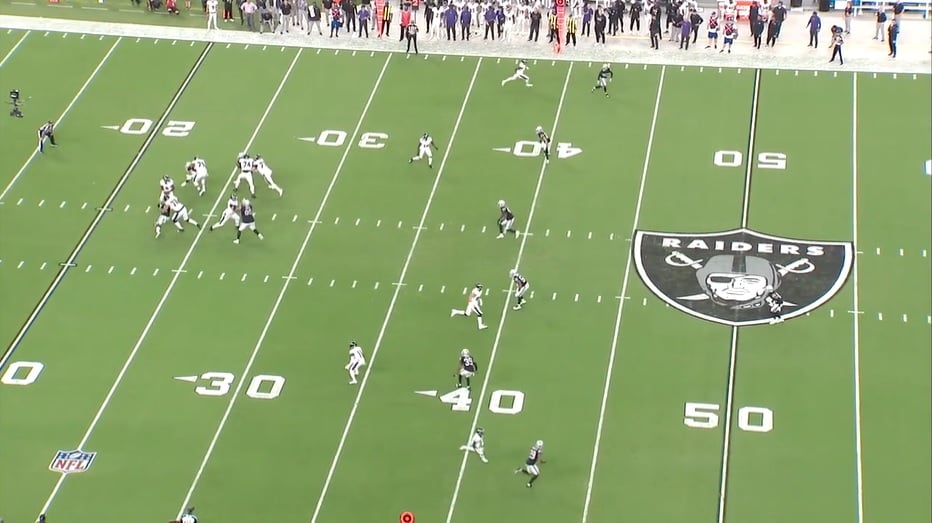 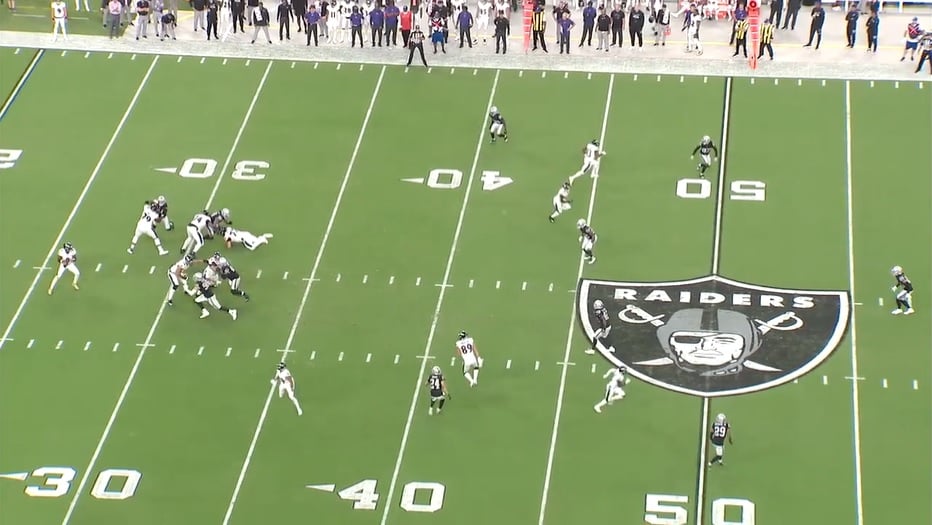 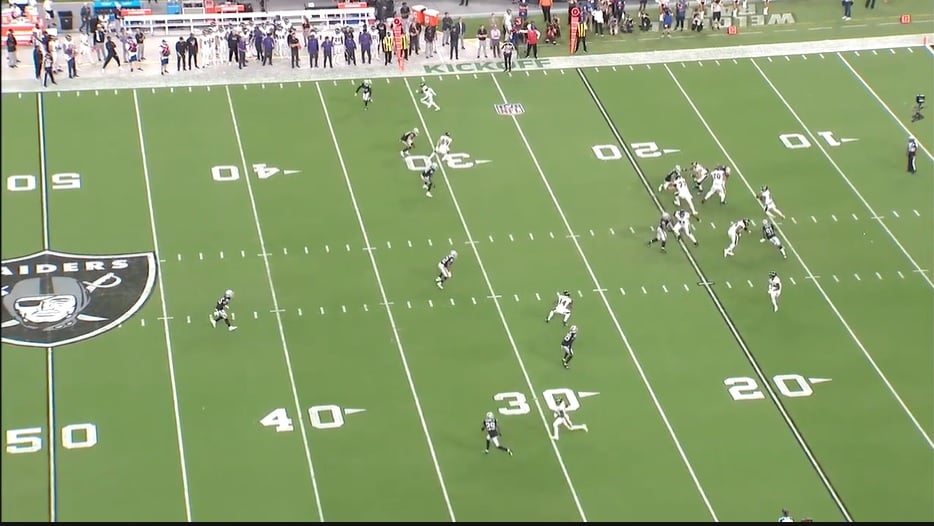 But this isn’t a traditional, spot-drop zone. They will carry and match routes downfield. Do a nice job to “Robot” any benders/crossers by #2/#3 to carry them in order to not have one zone get flooded. Here’s two examples. Watch #42 in the middle carry the bender.

Against single-high, it’s hard to throw over the middle of the field (MOFC = middle of field closed) but it will open up 1v1 chances downfield. Which is more in Ben Roethlisberger and this offense’s wheelhouse, especially a guy like Chase Claypool.

Fans will be back in Heinz field this week to see the feisty Las Vegas Raiders who are coming off a Monday night win versus the Baltimore Ravens.  The overtime win saw three players on the Raiders defense finish with double digit tackles and the team finished with 8 quarterback hits, four tackles for a loss, two forced fumbles and three sacks of the elusive Lamar Jackson.

In the last five games between the two teams the home team has won in each game with the last four games being decided by 3 points in each game.

The defensive ends are led by Maxx Crosby (98) who started off the season right with two sacks and 5 quarterback hits.  He is a high motor player who is disruptive and mixes up his pass rushes well.  He uses his length, lateral quickness and active hands to stress the tackles. Dan Moore and Chukwuma Okorafor will have their hands full. On the other side is Yannick Ngakoue (91) who has a reputation as a pass rusher but looked better against the run in week one especially using his speed and athleticism from the backside. He has speed around the edge and uses his hands well but an offense can run at him.

Carl Nassib (94) is the primary backup and wins with motor and football intelligence over athleticism. He is strong and sets the edge well. Malcolm Koonce (51) is a rookie is quick around the edge, has burst to the QB and is solid shedding blockers.  Clelin Ferrell (99) was a number four overall pick but was a healthy scratch last week. He has good snap quickness, uses his length well and wins with his hands.

Crosby (98) from the left of the screen slaps at the hands of the right tackle and then uses a dip and rip to get around him to the quarterback for the sack.

Ngakoue (91) from the right side of the screen shows why you need to block him on the backside of runs.

Inside at the defensive tackles let’s start with Johnathan Hankins (90). He’s a veteran 1 tech and large listed at 340 pounds. He has good motor, active hands and is a lane clogger handling double teams well.  Quinton Jefferson (77) plays the 3 tech and uses a solid bull rush to get after the passer and shows solid quickness and lateral agility against the run. Darius Philon (96) has good quickness and aggressiveness and likes to use a swim move to avoid blockers. Solomon Thomas (92) is another former first round selection and tries to use quickness to shoot gaps and is power pass rusher. Damion Square (97) replaced the injured Gerald McCoy on the roster this week and is a bit undersized but can play inside and on the edge as well.

K.J. Wright (34) was signed just before the season to be the SAM linebacker and has played in defensive coordinator Gus Bradley’s system in Seattle. He is a very good processor with solid athleticism who sheds blocks well, is a strong tackler and can cover in the short and intermediate areas. Denzel Perryman (52) also played for Bradley in San Diego and is an old school MIKE linebacker. He plays with good pad level and physicality when tackling or filling gaps and had ten tackles last week.

The WILL linebacker is Cory Littleton (42) who racks up tackles (10 last week). He has good length, using it to keep blockers off of him and is stays on the field in nickel. Nick Kwiatkoski (44) backs up inside and will also play on nickel. He is good in tight areas working through traffic and had a career best year in coverage per PFF in 2020. Rounding out the group is rookie Divine Deablo (5). He was a safety in college transitioning to linebacker and uses a good punch to shed blocks and shows solid route awareness.

Trayvon Mullen (27) is listed as the left cornerback and can play in Man coverage pressing at the line of scrimmage and is just as comfortable in Zone playing downhill with eyes on the quarterback. He has good quickness, loose hips and is sticky in Man. Casey Hayward (29) is listed as the right corner (he and Mullen will play on both sides) and is aggressive to the ball whether in the air or coming downhill to support the run being a strong tackler.

Rookie Nate Hobbs (39) plays in the slot and has very good size and athleticism and will be used to blitz. He’s a strong tackler but struggles to locate the ball in coverage. Damon Arnette (20) only saw one defensive snap last week but is a solid run supporter and reads the QB’s eyes well.  Amik Robertson (21) is undersized but tough and can play in the slot or outside.

Nice angle to see how quickly Hayward (29) closes the ten yard gap between him and the receiver and makes the quick tackle.

Rookie Tre’von Moehrig (25) is the free safety and has good range and ball skills often playing as the single high deep safety. He is fluid in space, quick to fill downhill and packs a punch as a tackler.  Johnathan Abram (24) is the strong safety and is often in the box or playing in the slot.  He is an aggressive, physical tackler, has very good acceleration to the ball and loves to hit anyone and everyone. Dallin Leavitt (32) comes in on dime coverage and will play the deep half, in the box or as the robber. Tyree Gillespie (37) is another rookie and he plays primarily on special teams while backing up Abram.  He is at his best when playing downhill against the run and reading the routes in front of him.

Nice play by Abram (24) here to fight through the block from the tight end to stop the receiver with one arm and limit the gain.