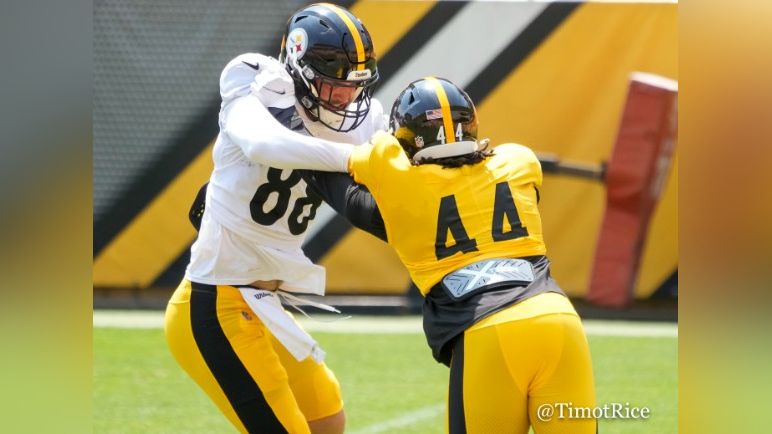 The Pittsburgh Steelers used a second-round draft pick on tight end Pat Freiermuth because they saw him as a complete tight end prospect, somebody who could not only contribute significantly as a pass-catcher but as a blocker as well, both in the run game and the passing game.

He showed the sort of impact that he could have as a receiving option when he caught a pair of touchdown passes from quarterback Ben Roethlisberger in the team’s third preseason game, two impressive adjustment grabs that were a little more than the routine.

The blocking, while effective in spurts, has a way to go yet, something Freiermuth knows himself, though he feels confident that he has put some good work on tape—and, to be clear, he has, but he’s also very much learning.

“You’re never where you want to be in that aspect. For myself, I’ve shown some good blocking ability”, he told reporters earlier today after practice when asked about that aspect of the game.

“I need to work on some stuff at the point of attack. That’s a work in progress”, he admitted. “I think overall, I showed that I can block, and I’m a capable and willing blocker, but, obviously there’s some things that I need to work on a lot, and I’m looking forward to that process”.

The Steelers have efforted to recommit their blocking efforts this season after a couple years of disappointing results, putting the emphasis on the skill positions to hold up their end of the bargain as well. The drafting of Freiermuth was a part of that effort.

While Vance McDonald had a couple of decent years as a blocker, and Jesse James could have passed as serviceable at times, the Steelers have not had a strong blocking presence at tight end since Heath Miller retired.

It’s fitting, then, that Freiermuth has invoked so many comparisons to Miller already, even before he was drafted. Those are big shoes to fill, of course, particularly in the less prestigious departments of the position, but he will have the opportunity to try to make an impact early on.

That’s because he was named a co-starter at the tight end position along with veteran Eric Ebron, an indication that the coaching staff expects him to spend a decent amount of time on the field. We’ll have to wait and see exactly how that plays out, but you don’t name somebody a starter and then leave him on the bench.