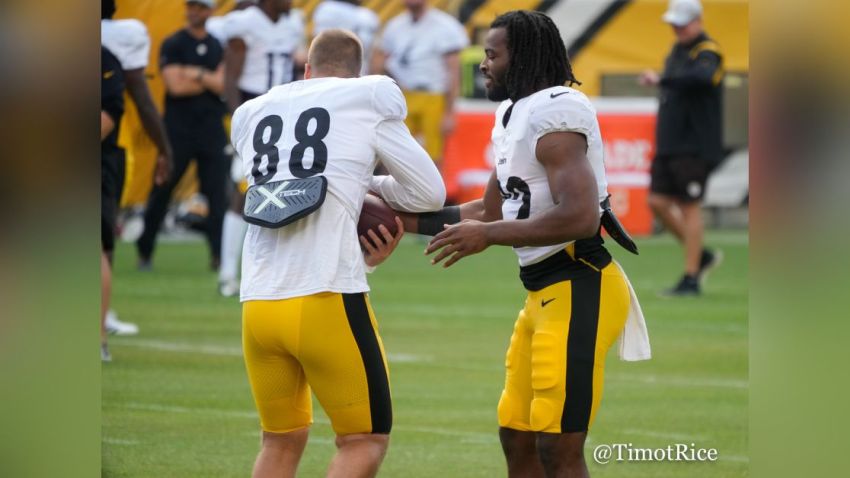 The Pittsburgh Steelers will have five rookies starting for them in their season opener against the Buffalo Bills, including seventh-round punter Pressley Harvin III. Each of their top four draft picks is projected to start for the offense this year, among that group being second-round tight end Pat Freiermuth, named a co-starter along with Eric Ebron.

While that was somewhat of a surprise, the bigger shock of the past couple of weeks was the revelation of Zach Banner’s slow return, which now has fourth-round pick Dan Moore Jr. starting at left tackle and Chukwuma Okorafor sliding to the right side. First-round running back Najee Harris and third-round center Kendrick Green were already the favorites to start.

“I think every rookie that’s playing is deserving”, Freiermuth told reporters earlier this week when he was asked about the impact of having so many inexperienced players in the lineup. “They wouldn’t put them out there if they weren’t deserving. I think the offense is gelling right now. Everyone’s gelling right now. I think we’re all ready to go, rookie or vet. We’re just ready to go hit someone else”.

For his part, Freiermuth did impress throughout the offseason program, and in the preseason as well, showing great hands, seemingly catching everything that comes in his radius. That certainly helped to move him up the depth chart.

Green was the presumed starter, at least on the outside, from the moment he was drafted, and he has consistently worked with the first-team offensive line in all public practices and the preseason. He, like all of the rookies, has exhibited some growing pains, but also potential.

To invoke a Tomlinism, ‘the strength of the group is the group’, a phrase he used last season to describe the depth at wide receiver. That also applies to the number of rookies who will be in prominent roles this year, and how they can mutually benefit one another.

In addition to the rookies, Trai Turner is also new to the lineup as a veteran free agent signing. Kevin Dotson is only in his second season. Only Ebron, quarterback Ben Roethlisberger, and the wide receivers offer much continuity—and even Chase Claypool is just a second-year guy.