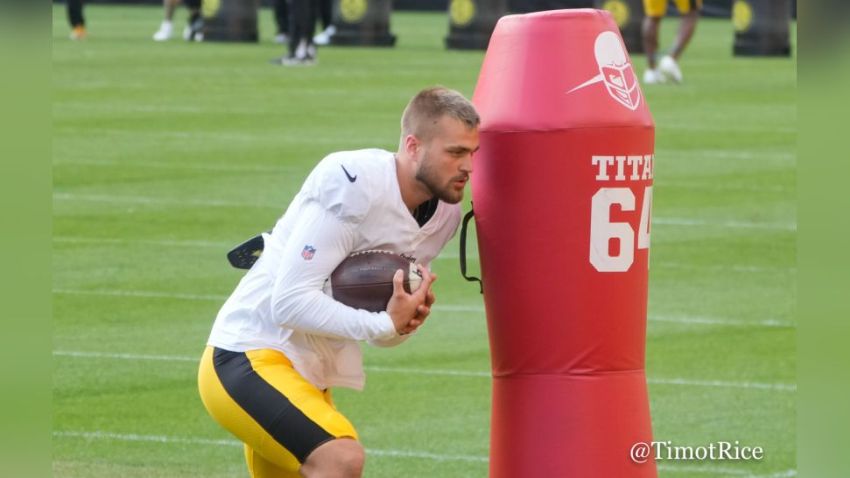 I’m not saying Pat Freiermuth will catch 30 passes his rookie season. But if he does, and that is possible in this brave new world of a 17-game season, he’ll join a pretty exclusive and impressive Pittsburgh Steelers’ club.

Miller and Green. That’s it. That’s the list. Freiermuth is gunning to be the third.

And that won’t be easy, even with his impressive preseason. At best, he’s sixth in the pecking order of receiving options behind the “big three” of receivers, JuJu Smith-Schuster, Diontae Johnson, and Chase Claypool, starting tight end Eric Ebron, and Najee Harris, who should catch at least 50 balls this season.

But there is a path for Freiermuth to hit that 30-mark. Over 17 games, he needs to average just 1.8 catches per game to hit that mark. Freiermuth certainly will have a role in this offense and perhaps a slightly larger one than initially anticipated, especially down in the red zone. Based on his play and recent trends (granted, under old OCs), it’s fair to believe Freiermuth will play around 50% of the offense’s snaps this season.

In 2018, Jesse James did exactly that, logging 50% of the snaps. And he caught – you guessed it – exactly 30 passes even as Vance McDonald had a career year of 50 receptions for over 600 yards.

Obviously, this 30-number is arbitrary and only worth mentioning just for the history. To be put in good company like Miller, arguably the best tight end in team history, right up there with Elbie Nickel, or Green, one of the first hyper-athletic tight ends who had some big-time seasons in Pittsburgh and elsewhere.

Freiermuth hitting 30 receptions or more importantly, not hitting that mark shouldn’t be the benchmark for pass/fail. He could have a promising rookie season and catch 20, 25, 29 passes. What he’s shown so far signals a guy who will take over as the starting tight end in 2022 and definitely catch 30+ passes then, especially if there’s a young or rookie quarterback under center.